The ‘Plunder’ To Enrich Jewish Bankers 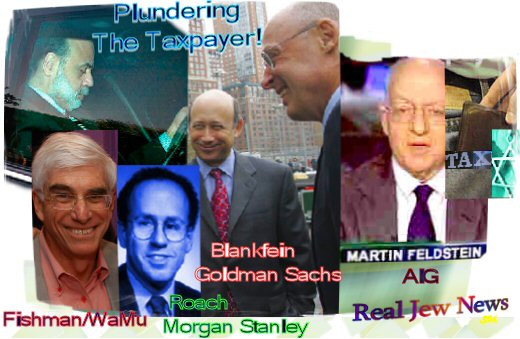 THE ‘PLUNDER’
TO ENRICH JEWISH BANKERS

Sources: “Why Bailout the Jewish Bankers?”, Christopher Jon Bjerknes Here
“NO To The Scam Bailout“ @ Rense.com Here
“PRODUCERS ENRICHING THE NON-PRODUCERS” is the crux of the matter regarding the current scam known as the “Paulson Bailout” of the failed Jewish banks.

We are now in the midst of transferring hard-earned money of American taxpayers into the pockets of Jewish bankers who provide no goods, no tangible products, no sweated-out commodities, just book-entry debt money with HIGH interest rates to the “goyim.”

Political analyst, Christopher Jon Bjerknes, whose site, Jewish Racism, is on the ADL hit list, makes some suggestions on how taxpayers’ efforts can be better utilized. I have used his opening suggestions and have added a few of my own:

Instead of bleeding ourselves dry paying for Jewish wars in Iraq and Afghanistan, we ought to wage war on World Jewry and the State of Israel, which are waging war on us.

Instead of bailing out wealthy Jewish bankers, we should issue our own money which would be without interest through US ‘Greenbacks’ as Lincoln did when President, though it got him assassinated.

Instead of letting the Jewish owned & run Federal Reserve bank stiff us with their high interest rates on their fabricated Bank Notes, we should protect the dollar from inflation by putting the Federal Reserve out of business.

Instead of allowing the Jewish-occupied mainstream media brainwash us into believing that “doing nothing” regarding the financial crisis will hurt us, we should tell the Jews at ABC, NBC, & CBS, that they are “doing nothing” less than protecting their synagogue buddies on Wall Street.

Instead of allowing McCain & Obama to get away with voting for a very unpopular Bailout Bill, we should tell McCain & Obama and that they are nothing more than shills of the Zionists.

Instead of putting up with Palin’s shrill invectives against Iran & Russia with her threats of war, we should tell the glamour girl to look out for America’s interests FIRST and not for the interests of the Jewish Lobby which owns McCain.

Perhaps A Real Leader Will Appear
Who Loves America More Than The Zionist Jews!

And: “Should US Bail Out Jewish Bankers?” Click Here