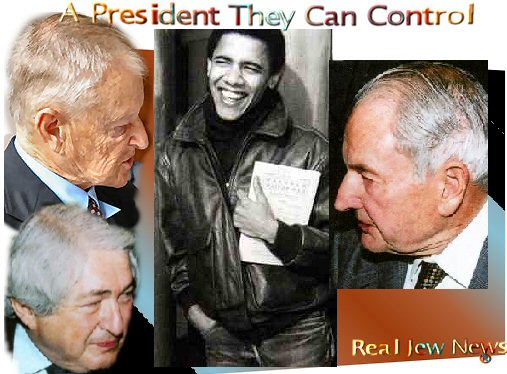 Rockefeller’s impetus for establishing the Commission came about after he had read a book entitled Between Two Ages written by Zbigniew Brzezinski of Columbia University.

In his book Brzezinski proposed an alliance between North America, Western Europe, and Japan which became the basis of The Trilateral Commission. Soon after his rendezvous with Rockefeller, Brzezinski developed the idea of a Pax Americana vis-à-vis the international financiers:

— “America is compelled to accommodate itself to the emerging international context. This means that the US government has a mission to guarantee and protect the various arrangements that have been contrived by private business” — Here.

In other words, it was necessary for the international upper class to band together to ensure that political leaders were brought to power who would protect the Zionist bankers’ global financial interests. 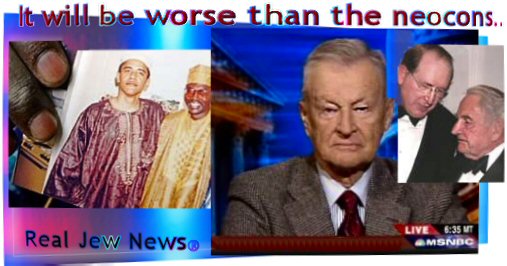 “ANY DOUBTS THAT OBAMA IS A PUPPETof Zbigniew Brzezinski and the Trilateral Commission ended when Brzezinski appeared on MSNBC’s Morning Joe on March 21 2008 to campaign for Obama,” wrote Rense.com political analyst Webster Tarpley Here.

In his book “Obama A Postmodern Coup” Tarpley says that Brzezinski is seeking a global showdown with Russia and China - a far more dangerous venture than the Neocon/Bush Iraq fiasco.

Tarpley observes that the Neocon/Bush era is over & is now replaced by the Brzezinski-Trilateral-Rockefeller phase of aggression. Tarpley’s most recent remarks are quite revealing:

— “Obama’s first task as President will be to drive the Chinese out of Africa thus depriving them of oil and raw materials. Pakistan and other Chinese allies will be targeted for destruction. When Obama says bomb Pakistan and send more troops into Afghanistan he is expressing the Brzezinski strategy.

“Brzezinski will advise Obama to break up both Russia and China reducing both to petty states which would give Washington another century of world domination” — Here.

Of significant note is that thus far Obama has ‘raised’ $340 million for his campaign compared to McCain’s $132 million.

Would it be a surprise to anyone that a good portion of Obama’s campaign money is coming from the Zionist bankers that Obama is now tied to? I trow not…