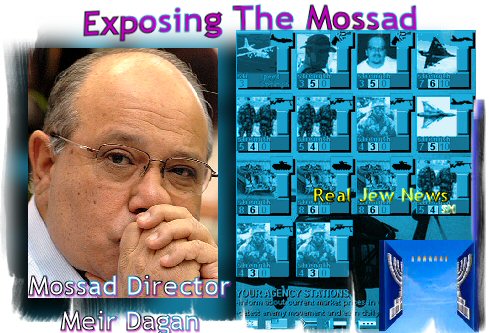 Unique Source: What Were Mossad Fake Passports Doing In Iraq? @ Rense.com Here
THE MOSSAD IS ISRAEL’S intelligence agency with headquarters in Tel Aviv.

According to the official Web Site, the Mossad carries out many operations including:

Preventing the development of non-conventional weapons by hostile countries.

As regards carrying out special operations beyond Israel’s borders, the recent Georgian conflict has brought to light Mossad’s role in training Georgian commandos.

OPERATION SUSANNA WAS a false flag operation conducted in 1954 by Mossad operatives in Egypt against American and British targets.

The operation, known as The Lavon Affair, was designed to appear as though Egyptian Arabs had carried out attacks on US Information Agency libraries in Alexandria and Cairo and British-owned theaters in Cairo on July 14, 1954. Mossad agents had infiltrated Egyptian society and recruited Egyptian-born Jews to carry out the operation.

At first, believing that radical Egyptians were to blame, Egyptian authorities finally uncovered the Mossad operation. Two Mossad agents were hanged and several others were sentenced to lengthy prison terms. Two other operatives committed suicide.

Since the US invasion of Iraq in 2003, over 530 Iraqi scientists have been assassinated by Mossad agents operating in Iraq. These scientists were considered a threat to Israel as they had the expertise to develop both biological and nuclear weapons.

According to a Palestine Information Center Report, the US Pentagon cooperated with the Mossad deciding that the best way to get rid of the scientists was to “physically eliminate them.”

The Brussels Tribunal has provided a list of the Iraqi scientists that have been murdered by the Mossad.