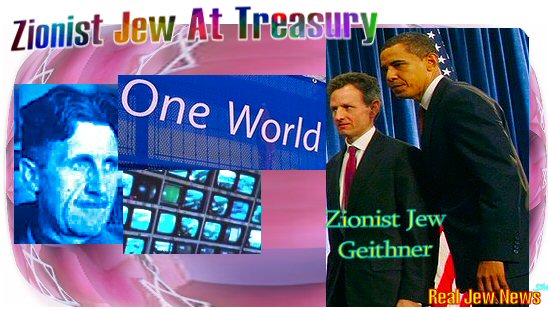 Geithner, who was born to a Jewish family in Brooklyn NY, has been serving the Rothschilds as the President of the Federal Reserve Bank of New York since 2003.

Many believe the New York Fed to be more powerful than the central Federal Reserve Bank since it is centered in the heart of the Zionist financial command and control matrix. In recent years, Geithner has played a leading role in a myriad of major financial issues including the recent liquidation of Bear Stearns.

At the close of the secret Bilderberg Meeting held on June 5-8 2008, Geithner, a Bilderberg 2008 attendee, penned an article for The Financial Times calling for a “global financial system” with the Federal Reseve Bank as its chief regulator (which he just might be talked into heading):

“The global banks need to operate under a unified framework that provides a stronger form of supervision. An authority over the infrastructure is needed. The Federal Reserve should play a central role in such a framework.” View Entire Story Here.

Indeed, Timothy Geithner, is a Zionist careerist with a reputed lust for power that has now elevated him to the front line of the visible elite in Washington.

The Federal Reserve, historically a private Jewish banking consortium, is currently configured with Jewish Americans occupying four seats on the five-member Board of Governors. No matter how high Geithner’s star ultimately rises, it will always be shining in a ‘Rothschild heaven.’ 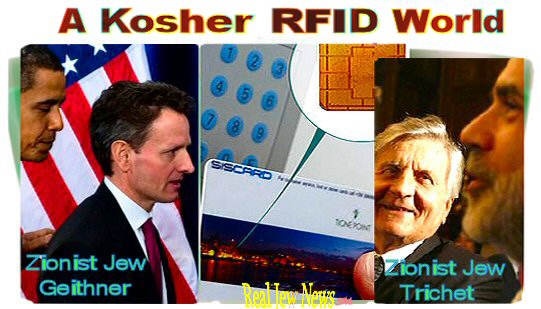 TOWARDS A CASHLESS SOCIETY

GEITHNER’S CALL FOR A GLOBAL REGULATORY BANKING SYSTEM is part of the financial elite’s agenda for a ‘cashless society’ which would utilize RFIDs and microchips. Geithner’s colleague, (and fellow Rothschild servant), is the Zionist Jew, Jean-Claude Trichet, who is the President of the European Central Bank in Frankfurt Germany. Trichet was also a Bilderberg 2008 attendee.

Trichet’s underling, Gertrude Tumpel-Gugerell, called for the beginnings of a ‘cashless society’ through a Single European Payments Area (SEPA) in her January 2008 speech to the European Commission of the EU:

“Today through SEPA we can now make payments across national borders by a simple credit transfer. And this is only the beginning! With the coming SEPA Cards Framework the payment process becomes fully electronic.” View Entire Story Here.

The European Central Bank is in reality essentially a wholly-owned subsidiary of the Rothschild Dynasty which, of course, also controls the Federal Reserve. The entire credit card system in Europe is managed by the ECB. No wonder then that Europe’s Visa Card chief stated that “notes and coins will be consigned to history by 2012.”

The very same goal is in store for America, of course. When cash is outlawed, the thriving underground economy predicated on cash will also vanish with it…and the controllers will have virtually everyone under total financial control. There’ll be no more working for cash under or over the table.

You won’t be giving Johnny $5 to mow the lawn anymore. The bottom line: without a card, you won’t be buying or selling anything…no groceries, no gas, no clothing…and good luck on holding that garage sale…

On October 14 2008, Bloomberg Financial News announced the implementation of ’stored valued cards’ to be used by retail chains throughout America. Stored-value cards have an imbedded microchip by which the purchaser’s checking account ‘loads money’ into the retailer’s cash register at the point of sale.

Soon all credit cards will have microchips. Constraints on who can ‘buy & sell,’ (the agenda of the Anti Christ), is coming soon. And Obama’s Zionist Jew at Treasury, Timothy Geithner, will be leading the way.

And: The Anti Christ Will Be A Jew Click Here

And: Bilderberg Group: A Jewish Who’s Who! Click Here