The Mossad’s Infiltration Of America 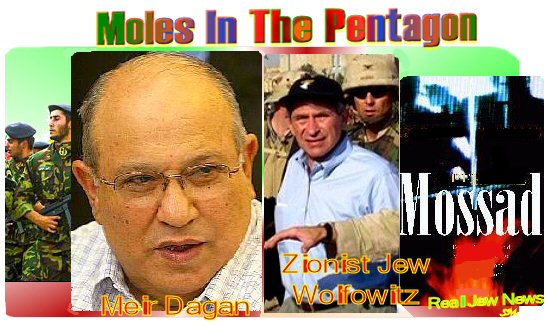 THE MOSSAD’S INFILTRATION
OF AMERICA

Source: How Israel Eavesdrops On US Citizens Here

For The Best Post Election Coverage CLICK: Rense.com Here
___________________________________
THE MOSSAD PRIDES ITSELF ON DEEP infiltration & penetration into every
‘Muslim’ militant group in the world. Thus any media-hyped ‘terrorist’ attack reported by the Jewish occupied press is doubtless a Mossad operation.

All of the Mossad-engineered ‘terrorist’ attacks benefit the Jews since it galvanizes the Western world into making Israel’s enemies their own - and gives Israel a free hand in dealing with the Palestinians who are looked upon as enemies of the world.

The infiltration of the Mossad into the US political & military infrastructure had its greatest impetus in the 1980’s during the Reagan & Bush Sr administrations. 3 Zionist Jews with close ties to the Mossad held influential offices in the Pentagon during this period:

Richard Perle: Perle worked at the Pentagon as Assistant Secretary of Defense for International Security Policy from 1981 to 1987. Prior to this, Perle was investigated by the US Justice Department for discussing classified information with an employee at the Israeli Embassy, but of course, the case was dropped. View Entire Story Here & Here.

All three of these Zionist Jews, whose loyalties are first to Israel & their fellow Jews, were brought back into high Pentagon positions by their useful idiot, George Bush Jr, during his first term as President from 2001-2004.

According to Karen Kwiatkowski, former Political-Military Affairs Officer at the Pentagon, “high clearances were granted to Israeli’s & Likudniks who would march through the halls of the Pentagon.”

Having grown up as a Jew, I can attest that Zionists like Perle, Wolfowitz, & Feith, would not scruple to bring moles into the Pentagon to spy on our nation. I say this because Jews have an attitude of derision and contempt for “Gentile” America. Zionist Jews look out for their own interests and will trash America when it comes to their own ’survival.’

A MOSSAD OPERATIVE IN THE PENTAGON

DOV ZAKHEIM IS A TALMUDIC JEW and former Yeshiva University Professor. Zakheim served as Chief Financial Officer and Comptroller of the Pentagon from 2001-2005 at the height of the Jewish-neocons’ political influence. Prior to his Pentagon position, Zakheim was CEO of Systems Planning Corporation (SPC) from 1987-2001.

During Zakheim’s tenure with SPC, he helped to market SPC’s Flight Termination System, a technology that takes over the controls of an airborne vehicle in flight. The probability of the sinister use of SPC’s Flight Termination System, (of which, Zakheim had privileged access, and through Zakheim, the Mossad & their moles), deserves serious consideration for the reopening of the 9/11 investigation.

In fact, the Zionist Jew, Dov Zakheim, along with his Mossad cohorts, should be put on trial for the theft of public funds, treason, and the murder of thousands of innocent victims at the World Trade Center on 9/11 2001.

As the Pentagon’s Comptroller from 2001-2004, Zakheim oversaw three Department of Defense budgets, the combined amount totaling $1 trillion dollars. In the spring of 2003, a scandal erupted, in which $1 trillion dollars in financial transactions was unaccounted for. Bush immediately pointed to “faulty Pentagon accounting” which would have (& should have) placed the blame on Zakheim.

A study by the Defense Department’s Inspector General discovered that not only could the Pentagon not account for the trillion dollars in monies spent, but that the US Army somehow lost track of 56 airplanes, 32 tanks, and 36 Javelin missile command launch-units. View Entire Story Here. 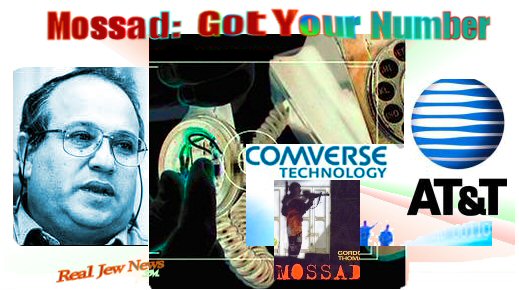 “ISRAEL IS THE EAVESDROPPING CAPITAL OF THE WORLD” observes James Bamford in his recent October 2008 book, The Shadow Factory - The Eavesdropping On America. In his book, Bamford gives a detailed account of how spying on American citizens since 9/11 has been outsourced to companies closely linked to Israel’s intelligence service, the Mossad.

In an alarming passage, Bamford reveals that AT&T & Verizon outsourced their wire-tapping arrangements made with the FBI and the National Security Agency (NSA) to two companies founded in Israel, Verint and Narus. These two Israeli companies have close ties with the Mossad’s Unit 8200, the Israeli equivalent of the NSA.

Through the contractual agreement between America’s largest phone companies and the Israeli telecom firms, Verint and Narus, the Mossad has access to once-private American communications information. “Virtually all US voice and data communications can be remotely accessed by these companies in Israel,” writes Bamford.

Verint and Narus were founded by Israelis — the Israeli-born, Jacob Kobi Alexander, being the founder of Comverse Technology, Verint’s parent company, headquartered in Israel. Comverse Technology subcontracts the installation of tapping equipment now built into every phone system in America. And Comverse maintains its own connections to the phone tapping equipment, insisting that it is for “maintenance purposes only.” View Entire Story Here & Here.