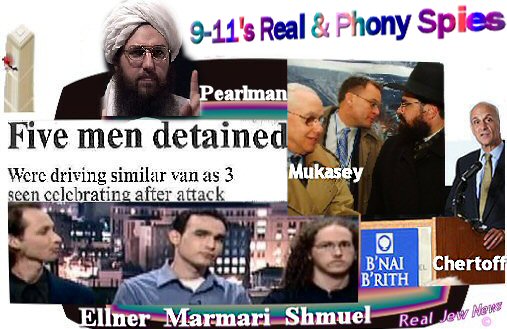 Beginning in 2001, Michael Chertoff - the son of a Talmudic rabbi - was head of the criminal division of the US Justice Department. In 2005 President Bush nominated Chertoff as Secretary of US Homeland Security.

Chertoff’s synagogue buddy, Michael Bernard Mukasey - an Orthodox Jew, was appointed by Bush as US Attorney General in 2007.

For example, take the 5 Israelis who were investigated by the FBI for their role in the 9-11 travesty but were allowed to return to Israel in late 2001. It was Michael Chertoff, then head of the US Justice Department’s criminal division & Talmudic Jew - Michael Mukasey, then Federal District Chief judge for New York in Manhattan, who gave the order. 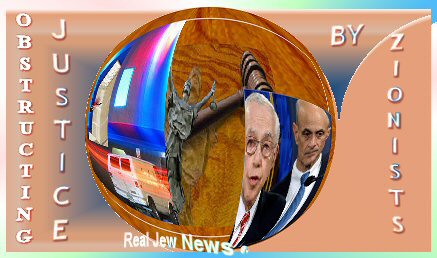 OBSTRUCTION OF JUSTICE BY JEWS

WITHIN MINUTES AFTER THE FIRST PLANE STRUCK THE NORTH TOWER of the World Trade Center a homemaker saw 3 Israelis photographing & celebrating the incident.

The three Israelis were also seen by the homemaker dancing on the roof of a white van in the parking lot of the homemaker’s apartment building in New Jersey which had a full view of the WTC in lower Manhattan.

The FBI was soon on the scene and the plate number of the van was traced to a company called Urban Moving. Two other Israelis connected with Urban Moving were apprehended and the 5 Israelis were detained & investigated for 71 days before being quietly deported at the end of November 2001.

The names of the Israelis were identified as Sivan and Paul Kurzberg, Oded Ellner, Omer Marmari and Yaron Shmuel. Unofficial reports by the FBI concluded that the detained Israelis were Mossad agents. But official spokesmen for the FBI, the US Justice Department, and the Immigration and Naturalization Service refused to discuss the case.

Also noteworthy is that a Jewish reporter of the Jewish Daily Forward named Marc Perlman (not to be confused with phony spy “Adam Pearlman”) had an inside track on the dancing Israelis. Five years after he broke the story in 2002 - he said in an interview on February 08 2007:

— “We ended up writing a story in March of 2002 right after the incident happened. I was talking to sources and I was able to confirm that according to the FBI two of those movers were identified as Mossad agents.” — Here.

The FBI had come under intense pressure from several congressmen and various pro-Israel groups to release the Israelis. The order to free them came from Michael Chertoff & Judge Michael Mukasey, both Talmudic Jews. An FBI investigator noted, “Leads were not fully investigated” due to pressure from “higher echelons.” 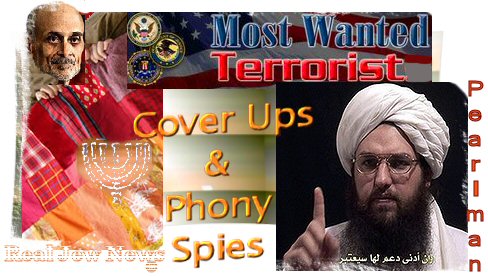 TO COVER UP THE STORY OF THE DANCING ISRAELIS Talmudic Jew Michael Chertoff of the US Justice Department rounded up over 1000 Arabs for immigration violations and placed them in New York jails.

The Israelis thus became less conspicuous as the government and the Zionist controlled media could then claim that the Israelis were just immigration violators caught in the same dragnet along with Arab violators.

Adding to this mockery of justice, a Jewish so called “convert” to Islam named “Adam Yahiye Gadahn,” an “English-speaking senior operative for Al Qaida,” is now on the FBI’s Most Wanted List for “aiding an enemy of the US.”

Adam Yahiye Gadahn was born “Adam Pearlman” whose Jewish paternal grandfather was Carl Pearlman, a prominent member of the Board of Directors of the Jewish Anti-Defamation League. Adam makes video tapes promoting Al Qaida and for this he is a “very dangerous terrorist!” What a joke…