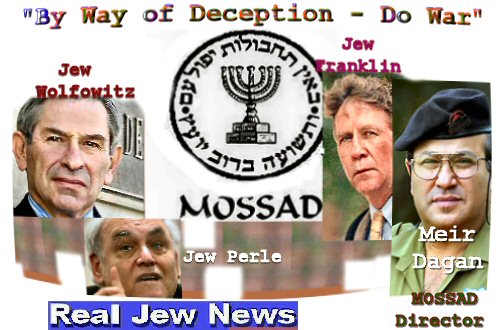 Sources: Zionism Explained Here; History of Israel’s Intelligence Community, Daniel Raviv
JEWS HAVE ONE PRIMARY LOYALTY - THEMSELVES. Jews are ‘Jews-First’ - ‘Americans-Second.’ Jews are in every important corporation, university, and government agency in America. Their access to American economic, scientific, and technological information is limitless.

The Mossad, Israel’s Intelligence Network, which began their operations in pre-WWII Europe, needs “agents” to protect their Zionist state and world-wide enterprises. Since most Jews are Zionists, especially those who insinuate themselves into spheres of influence, the Mossad does not have to look very hard to find “recruits.” 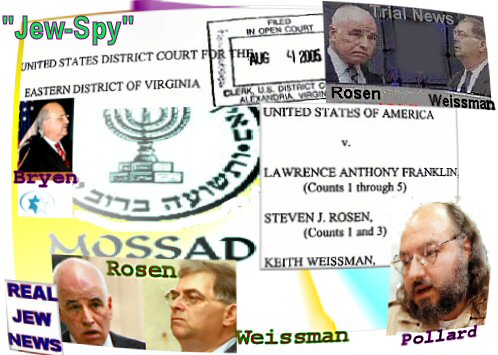 MOSSAD SPYS YOU SHOULD KNOW

* Paul Wolfowitz: Neocon Jew. While on staff for the Arms Control and Disarmament Agency (ACDA) in 1978, Wolfowitz was investigated for providing a classified document on the proposed sale of U.S. weapons to Saudi Arabia to an Israeli Embassy official, (Mossad agent). The inquiry was dropped due to pressure from the AIPAC.

In 1992, while Undersecretary for Policy for the then, Secretary of Defense, Richard Cheney, Wolfowitz was under investigation for the transfer to China through Israeli Embassy intermediaries. (Mossad agents), of U.S. Patriot missile technology. Cheney intervened and the investigation was stopped.

* Lawrence A. Franklin: Zionist Jew. In 2005, Franklin, working as a defense analyst since 1979 for the U.S. Secretary of Defense, was charged with disclosing national defense information to an Israeli diplomat, (Mossad agent), and two Jewish AIPAC lobbyists, Steve Rosen & Keith Weissman, over a two year period. Neocon Jew Douglas Feith was said to be involved but escaped investigations.

~ In addition, according to the FBI affidavit, 38 “top secret” U.S. government documents were found during a search of Franklin’s West Virginia home in June 2004.
See: US Vs Franklin, Rosen, & Weisman” Here

* Richard Perle: Neocon Jew. While on staff for Henry Jackson’s Senate Foreign Relations Committee in 1970, an FBI wiretap picked up Perle discussing with an Israeli Embassy official, (Mossad agent), classified information which he said had been supplied by a Jewish staff member on the National Security Council named Helmut Sonnenfeldt. The investigation of Perle was halted due to the intervention of his friend, Paul Wolfowitz who worked for the ACDA.

* Douglas Feith: Neocon Jew. While on staff for the National Security Council in 1972, Feith was fired due to an FBI inquiry into his providing classified documents to an official (Mossad agent) of the Israeli Embassy in Washington.

* Stephen Bryen: Neocon Jew. Hired by fellow neocon Jew Richard Perle as Deputy Assistant Secretary of Defense during the Reagan administration, Bryen was investigated in 1978 for offering classified documents to the Mossad station chief of the Israeli embassy in the presence of an AIPAC representative.

Bryen’s fingerprints were found on the documents in question despite his denials that he had ever had the documents in his possession. (Bryen refused to take a polygraph test.) The Bryen investigation was ultimately shut down because of the decision by the Jew Philip Heymann, the chief of the Justice Department’s Criminal Division, to drop the case.

* Roy “Cal” Bullock: Employed in the 1990’s in California by the Anti Defamation League (ADL) of B’nai B’rith to keep files on potential “enemies.”

~ Bullock was assigned by the ADL to monitor “anti-democratic” individuals and organizations such as Greenpeace, National Association of Arab Americans, the Japanese-Americans Citizens League, Coalition of Black Trade Unionists, Willis Carto’s Liberty Lobby, and the Boycott Shell Committee.

* Mira Lansky Boland: Granddaughter of Jewish gangster Meyer Lansky. She worked as the “law-enforcement liaison” for the ADL in the 1990’s. Boland arranged expensive trips to Israel for certain key police officers who could have something to offer the ADL in return.

* Jonathan Pollard: Zionist Jew. Sentenced in 1986 to life imprisonment for obtaining, copying, and transferring to Israel, Radio-Signal Notations, a 10-volume manual detailing America’s global electronic surveillance network. Zionist Jews are working around the clock to get this criminal released. 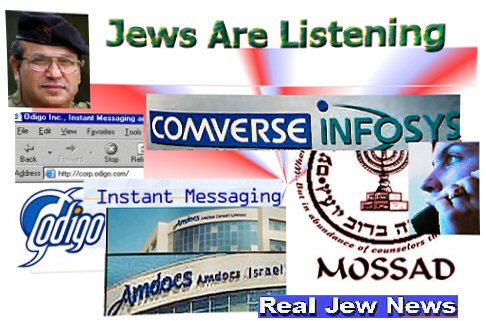 MOSSAD SET UP 3 telecommunications companies in the U.S:

1) Amdocs: Provides billing and directory assistance for 90% of the phone companies in the U.S. Its main computer center is in Israel. It performs “traffic analysis” of someone’s phone calls based on a pattern of who they are calling and when.

2) Comverse Infosys: Subcontracts the installation of the automatic tapping equipment. Works closely with Law Enforcement Departments throughout the US.

3) Odigo: Provides the passing system for all the Instant Message services. Employees of Odigo which had offices in the World Trade Center were evidently forewarned of the 9/11 attack Here.

HOW DO WE STOP THE ZIONIST NETWORK IN AMERICA?

TO STOP THE ZIONIST JEWS we must first understand that in a pluralistic society which the Jews have produced through the media and the Open Immigration Law of 1965, the Jews will take charge.

This is why America must become a monolithic Christian nation again. The Jews fear nothing more than to have a “Christian” nation to contend with. Thus we must each commit our lives to Jesus Christ as our Lord and Saviour and to regular Church attendance.

For in a “Christian” nation with a “Christian” consciousness, Americans will once again be on the lookout for the “enemies of the Cross,” the Zionist Jews. And conscientious Chiristian Americans will chase the Jews out of every sphere of influence in America which they now have infiltrated.

For More See: “A Christian America! - Not A Jewish America! ” Click Here