A Mossad Assassination In Austria? 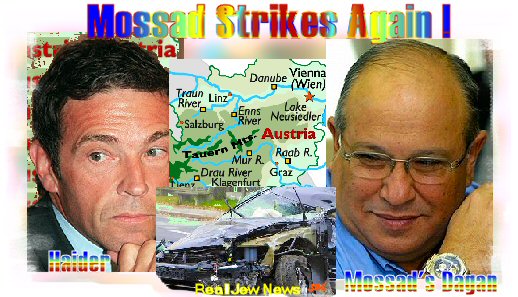 A MOSSAD ASSASSINATION IN AUSTRIA?
By Brother Nathanael Kapner, Copyright 2008-2011

EXECUTING ASSASSINATIONS IS THE JOB of the Mossad’s “Special Operations Divisions,” known as “Kidon,” which means “bayonet” in Hebrew. The Mossad is the Israeli counterpart of America’s CIA.

The Mossad’s “Kidon” Assassinations Unit works under diplomatic cover vis a vis the thousands of Israeli embassies, consulates, and missions throughout the world. One such Israeli embassy is located in Vienna Austria, 200 kms from Klagenfurt, where Jorg Haider was “killed in a car crash” while on his way to celebrate his mother’s 90th birthday on October 11 2008.

Haider was a very popular Austrian politician, who was a leader of the nationalist party known as the Alliance for the Future of Austria. Only 16 days before Haider’s “car crash,” he openly spoke out against the “criminal elite Zionist bankers.” (The ADL kept an active file on “Jorg Haider.”)

Four days after Haider’s speech against the Zionist bankers, the Alliance for the Future of Austria had won 29% of the votes in Austria’s September 29 2008 election results for seats on the Austrian parliament. This was double the amount from the 2006 elections.

The ‘diplomats’ (Mossad agents of the Kidon Unit) at the Israeli Embassy in Vienna were not at all happy with the results of the election, nor Haider’s rising popularity, nor his speech (his last) on the Zionist bankers, which was the nail that sealed his upcoming coffin…

EXPERTS & OFFICIALS OF VOLKSWAGON are speculating that Jorg Haider was a victim of foul play. The car Haider was driving was a VW Phaeton W12 of which VW officials insist is the one of the safest cars on the road.

On October 18 2008, officials of VW conducted their own investigation of the “car crash.” VW spokesman Peter Thul claimed that someone with access to Haider’s car key could have manipulated the limo’s electrics which control the engine’s ‘brain:’

“The Phaeton is the safest of all autos. You’d need the key to manipulate the electronics, so someone at a garage would have had to tamper with it.” View Entire Story Here & Here.

It is being alleged that Haider was driving at high speed.

But VW officials insist that the VW Phaeton’s ‘physics’ should have been able to handle the speed of Haider’s alleged acceleration as he maneuvered the car around the curve just prior to the “crash.”

Regarding the alleged “drunken state” of Haider at the time of the accident, Haider’s colleagues at the Alliance political party’s reception from which Haider was returning, contend that Haider was not intoxicated.

Haider’s associates say that the official investigation had all the earmarks of a “cover-up,” arguing that the investigation results of the renowned political figure, Jorg Haider, required weeks of examination, not days.