The War On Terror Is A Jewish Hoax 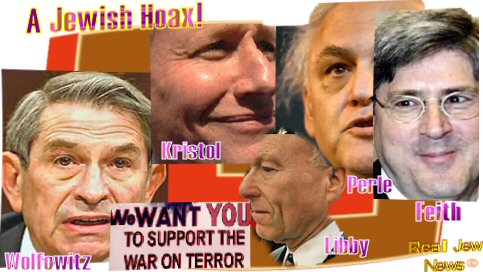 THE WAR ON TERROR IS A JEWISH HOAX
By Brother Nathanael Kapner, Copyright 2008-2010

Or Send Your Contribution To:
Brother Nathanael Kapner; PO Box 547; Priest River ID 83856
E-mail: bronathanael@yahoo.com
ONLY THE JEWS have benefited from the War On Terror.

The Jewish Neocons within the Bush Administration promoted it to serve their Zionist agenda. The War On Terror has only destroyed our liberties at home and pushed us into unnecessary wars abroad where no Jewish soldiers fight.

Long before 9-11 the Jewish Neocons had been arguing for regime changes throughout the Middle East using military force beginning in Iraq.

This plan was designed to establish a Pax Americana/Israeliana. But this Zionist plan has proven to be a fiasco given Middle East realities as evinced in Iraq.

Here Are The Jews Who Created The War On Terror Hoax:

-William Kristol- Founder of the Jew “Think Tank” Project for the New American Century (PNAC). Kristol is the son of Irving Kristol who is called the “Godfather of the Jewish Neocon Movement.”

Kristol was the main signatory of the September 2000 PNAC letter, Rebuilding America’s Defenses endorsing President Bush’s “admirable commitment to lead the world to victory in the War Against Terrorism.” David Corn, current writer for the Congressional Quarterly, calls Kristol “the No. 1 cheerleader for the Iraq war” Here.

-Lewis “Scooter” Libby- Chief promoter of the War On Terror Here when Assistant to President Bush from 2001-2005. Libby resigned after he was indicted on federal obstruction and perjury charges in a Grand Jury investigation into the Plame Affair regarding the Iraq War.

Libby was sentenced to 30 months in prison on felony counts with regard to the criminality of the War In Iraq Here. But Bush, beholden to the Jewish Lobby which got him elected, commuted Libby’s sentence and he got off scot-free.

-Paul Wolfowitz- US Deputy Secretary of Defense under President Bush from 2001-2005. Wolfowitz is best known as one of the “architects” of the war against Iraq in which not a single Jewish young man or woman has fought or died.

Wolfowitz is also known for his infamous quote when Deputy Secretary of Defense: “Intelligence about terrorism is inherently murky and the U.S. must be prepared to act on less-than-perfect information” Here.

-Douglas Feith- Feith served as the Under Secretary of Defense for Policy under President Bush from 2001-2005.

In 1999, Feith’s Jewish law firm, Feith & Zell, formed an alliance with the Israel-based law firm, Zell, Goldberg & Co, whose clients included the major military contractors, Lockheed & Northrop Grumman. What a nice nest egg for Feith to feed while promoting the War On Terror!

Feith’s new book, War and Decision, in his attempt to justify the Iraq War, provides excerpts of documents revealing that the US Department of Defense was calling for Bush to focus not on taking down the Al-Qaeda network but on establishing “new regimes” throughout the Middle East Here.

This is just one more proof that Jews are not interested in their contrived “War On Terrorism” but rather on how it can further own their selfish interests. Indeed, Jews admit that when it comes to preserving their existence then all morals and ethics are irrelevant Here.

-Abraham Shulsky- Protege of the Jewish Neocon Richard Pearle. He was appointed head of the US Department Of Defense “Office of Special Plans” which was created for him by his Jewish buddy Wolfowitz. It was this office that supplied the fraudulent intelligence of “secret Iraqi nuclear weapons” that was used by the Bush administration to justify the War in Iraq Here & Here. 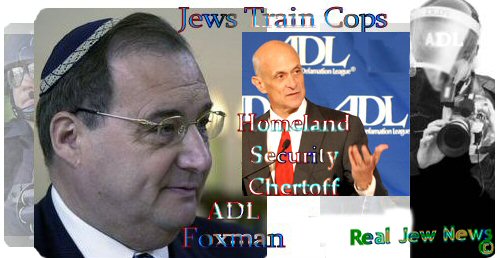 TOWARD A JEWISH POLICE STATE

IN A SPEECH TO A JEWISH AUDIENCE Harvard Jew Alan Dershowitz said:

EVEN MORE ALARMING is seeing hundreds of US Police Departments being “trained” by the powerful Jewish Lobby known as The Anti-Defamation League (ADL) for the bogus War Against Terror.

The ADL of B’nai B’rith in fact devotes a special section on their Web Site to “Law Enforcement” which records all of the Police Departments it has trained Here.

The ADL is indeed creating a Police State which is “good to the Jews.” A recent ADL training session took place at the US Holocaust Memorial Museum Here.

But do you think that this ADL brainwashing program will also warn of the dangers of police brutality against Christians and make an example of the murderous Judaic Cheka of the Jewish Bolshevik Revolution? Not on your life.