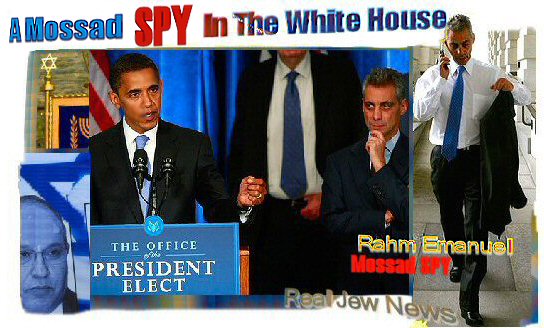 A MOSSAD SPY
TO RUN THE WHITE HOUSE

The Zionist Control Of America
By Brother Nathanael Kapner, Copyright 2008-2010 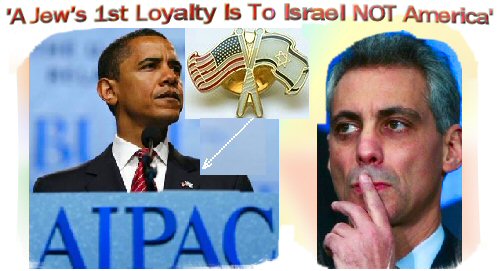 But the Zionist Jew, Rahm Israel Emanuel, who is a dual Israeli/US citizen, will do much more than “kick ass & take names.” Emanuel will act as an effective spy in the White House for the Mossad, Israel’s intelligence agency. With Emanuel running the White House, Mossad HQ will enjoy an unprecedented direct flow of America’s highest level national security information.

Emanuel’s connections to the Mossad began at birth in 1959. Rahm Emanuel is the son of Israeli-born physician, Benjamin Emanuel, who passed secret codes for Menachim Begin’s Israeli terrorist group known as the Irgun. “Secret codes” are the province of the Mossad, and the Mossad, only.

WORKING FOR THE JEWISH LOBBY in 1980, the youthful & ambitious Rahm Emanuel took an active role in unseating the Pro-Palestinian Illinois Congressman, Paul Findley, whom the Jewish Lobby wanted removed from office. Emanuel was installed as the Finance Director for the Democrat & Jew, David Robinson, funneling millions of Jewish dollars into his campaign, successfully unseateding the long-serving Findley.

Ever since, Emanuel has been among the insiders of the Jewish Lobby. One of Emanuel’s ‘Gentile’ stooges is the former Special Middle East negotiator, Dennis Ross. The Pro-Israel Ross accompanied Obama along with Emanuel on his trip to Israel in July of 2008. In October of 2008, Ross endorsed Obama, an obvious prelude to a future advisory role for this Emanuel-sponsored careerist. 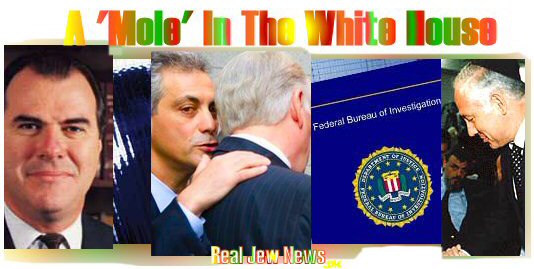 Above Left: FBI O’Neill – – Above Right: Netahnyahu
THE FBI FILE ON EMANUEL

RAHM EMANUEL WAS FINGERED as a Mossad Agent by the late FBI counter-terrorism Assistant Director FBI agent, John O’Neill. Later, O’Neill was forced to retire after being set up in a smear operation.

O’Neil and another FBI agent, who still works for the bureau but must remain nameless, discovered that Emanuel, a “special adviser” to Clinton, acted as the liaison to former Israeli Prime Minister, Benjamin Netanyahu, in operating an espionage and blackmail operation against the Clinton White House.

O’Neill and the agent discovered that Emanuel had recruited Israeli Mossad agent, Monica Lewinsky, to enter the Clinton White House as an intern and then seduce President Clinton for the purpose of espionage and blackmail in order to sink Clinton’s proposed Middle East peace deal.

In sworn testimony before the Office of Independent Counsel, Monica Lewinsky stated:

“President Clinton suspected that a foreign embassy was tapping his telephones and proposed a cover. He told me that if I was ever questioned, I should say that we knew our calls were being monitored and that the phone sex was just a put on.” View Entire Story Here, Here, & Here.

The FBI investigation of Emanuel became part of a file code-named the Mega File. “Mega” is a reference to a top-level Mossad agent in the Reagan administration who was said to have run a number of Israeli agents. “Mega” also refers in FBI terminology to shared information between the Mossad & the CIA.

– We’ve Got The Goods On The Zionist-Jewish “Mole” Emanuel –
Let’s Now Tell The World!