Or Send Your Contribution To:
Brother Nathanael Kapner; PO Box 547; Priest River ID 83856
E-mail: bronathanael@yahoo.com
AT THE CLOSE OF THE BILDERBERG MEETING held in Chantilly VA, June 5-8 2008, the Jew Timothy Geithner, President of the New York Branch of the Federal Reserve and Bilderberg 2008 attendee, penned a commentary piece in The Financial Times.


Geithner’s article calls for a “global financial system” operating under a unified regulatory framework. Here is an excerpt:

— “The main global banks need to operate under a unified framework that provides a stronger form of consolidated supervision.

To compliment this we need to put in place a stronger framework of oversight authority over the critical parts of the payments system – not just the established clearing and settlements systems - but the infrastructure that underpins the decentralized over-the-counter markets. The Federal Reserve should play a central role in such a framework.” —

Indeed, this Jew, Timothy Geithner, is a Zionist careerist with a lust for power! Already the Federal Reserve has 4 Jews ruling its 5-member Board of Governors. It looks like this Jew Geithner would like to be Chairman of the Board & rule the world! (He’ll still be a Rothschild puppet). 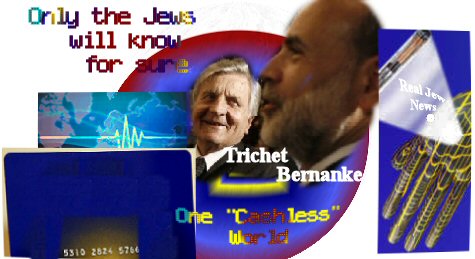 TOWARDS A ZIONIST CASHLESS WORLD

ONE OF THE MOST POWERFUL figures in the world of central banking, the Jew, Jean-Claude Trichet, President of the European Central Bank in Frankfurt Germany, was also a Bilderberg 2008 attendee.

Trichet’s colleague, Gertrude Tumpel-Gugerell, of the ECB’s Executive Board, called for the beginnings of a “cashless world” through SEPA in her January 2008 speech to the European Commission of the EU.

Here Is An Excerpt From Gertrude’s Speech:

— “Nine years ago we introduced the single currency. Today we launch SEPA – another important step in European integration. But today is only just the beginning! We can now make payments by European credit transfer.

Gertrude tells us that this “cashless society” is “only just the beginning!” What will be next? A world-wide currency implanted in our wrists to eliminate paper?


And: “Bilderberg Meeting: A Jewish Who’s Who!” Click Here