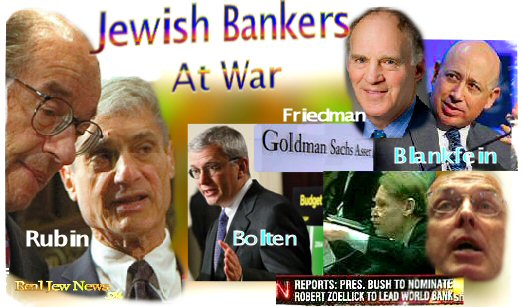 Sources: Financial Warfare Over Global Power Here
The Long Disputed War @ Rense.com Here
PAULSON IS A PUPPET of the wealthy Jewish bankers who he is ‘bailing out.’ Paulson’s predecessor at both Goldman Sachs and the Treasury, is the Jew, Robert Rubin, who is presently the Director of Citigroup.

The current CEO of Goldman Sachs, is the Jew, Lloyd Blankfein, only one of the many Jewish owners of the privately owned Federal Reserve Bank. Benjamin Shalom Bernanke heads up the Jewish bank cartel known as the Federal Reserve.

But Bernanke in turn answers to his real boss, Alan Greenspan, who reports directly to Jacob Rothschild of London, the brains & money behind all Jewish bankers.

Another puppet of the Jewish bankers and key player in the financial “crisis,” is Bush’s Chief of Staff, Joshua Bolten, who was Director of Legal & Government Affairs for Goldman Sachs International in London.

Yes that’s right folks, Goldman Sachs, one of the recipients of American tax payers’ 750 billion, does its “international” business in London’s The City, the Zionist Jewish banking backroom of the world.

“Jewish Crony Banking,” is thus a term most appropriate for the Paulson bailout. For neither Paulson, nor his cronies, Bolten and Rubin, place the blame on their Wall Street Jewish friends for the crisis, but rather, point their fingers at “Asian & Indian bankers” as the culprits, a far cry from Zionist Jewish bankers.

The question arises: “Is the financial panic deliberately being used as a ‘war strategy’ by the Jewish bankers to bring on a centralized global banking cabal?” 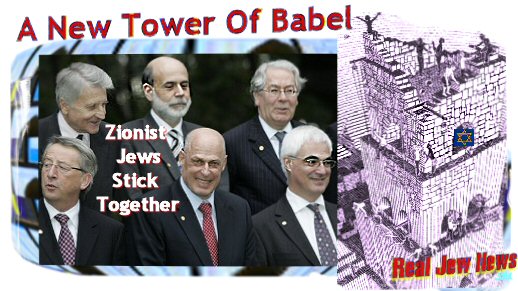 Mimicking Paulson, was the Jew, Peter Benjamin Mandelson, Britain’s new Minister for Business & Regulatory Reform, who recently scolded EU members for responding to the crisis in a ‘new wave of economic nationalism.’ Mandelson said in an interview in early October 2008, that the decisions by Ireland and Greece to guarantee banks deposits held at domestic banks would “create a distortion in EU solidarity.”

At a World Economic Forum On September 28 2008, Mandelson called for a global regulatory banking system:

Particularly alarming is Mandelson’s threat against EU nations for “venturing into economic nationalism.” International Jewry with its banking dominance throughout the Western world, fears nothing more than “nationalism” - - even more so, “Christian nationalism.” This is why Vladimir Putin, who is building a Christian-Russia, is vehemently maligned by the Jewish-occupied press in Europe and the US.

In a Russian televised appearance on October 9 2008, Putin remarked that the US & Wall Street were no longer to be viewed as a “trustworthy financial leaders:”

“Trust in the United States as the leader of the free world and free economy, and trust in Wall Street as the centre of this trust, has been lost forever.

This is not only my view. European leaders, experts, presidents of central banks and finance ministers are saying this also.” View Entire Story Here.

Methinks That Leader Is Vladimir Putin!


And: “3 Goals Of The New World Order Jews” Click Here

And: “Should US Bail Out Jewish Bankers?” Click Here