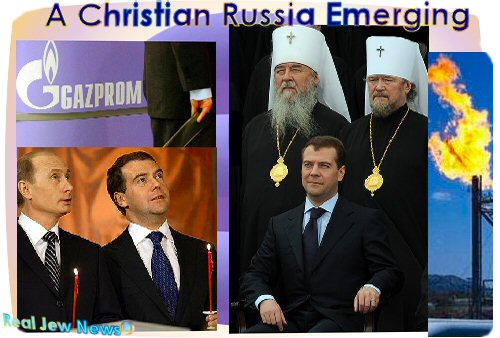 Unique Source: “Russia’s Energy Might” @ Rense.com Here
THE REVIVAL OF THE CHURCH IN RUSSIA is in full swing - much to the chagrin of the Jews.

On June 29 2008 Russian President Dimitry Medvedev spoke at a Russian Orthodox Church celebration of the yearly anniversary of the Baptism of Russia saying:

— “The continual work of the Russian Orthodox Church will effect the revival of Christianity in our nation. Thanks to the Orthodox faith Russian culture through the years has acquired Biblical values on which the system of moral ideals for our nation is built.”

“When we celebrated the millennial anniversary of the Baptism of Russia twenty years ago it was the beginning of churches being rebuilt and the restoration of the integrity of the Orthodox Church” — Here.

The Russian First Lady, Svetlana Medvedev, is also quite active in the Russian Church. She sponsors a program entitled “Movement for the Moral and Spiritual Culture of the Younger Generation in Russia.” This movement is responsible for bringing Orthodoxy 101 into Russian public schools which has incited the ire of the Russian Jewish community.

WILL RUSSIA BRING THE WEST TO ITS KNEES?

PRIME MINISTER VLADIMIR PUTIN is assembling an economic machine powerful enough to force Europe, the US, and Asia to their knees.

Russia will soon exert such global control of the supply of oil that it will be able to do anything it wants politically.

Europe is already importing one-third of its natural gas from Russia. With Russia’s pipelines soon to flow east into Asia and west into Europe and with tankers sailing from Siberia to California the unipolar hegemony of the West will come to an end.

Russia has now overtaken Saudi Arabia as the world’s largest producer of oil with its two State controlled energy giants, Gazprom and Rosneft.

Of significant note, on July 15 2008, Gazprom signed a major energy deal with Iran. This, as Rense.com political analyst Karl Schwarz points out, would cause an attack on Iran to be viewed as an attack on Russia’s own vital interests Here.