How The Jews Took Great Britain 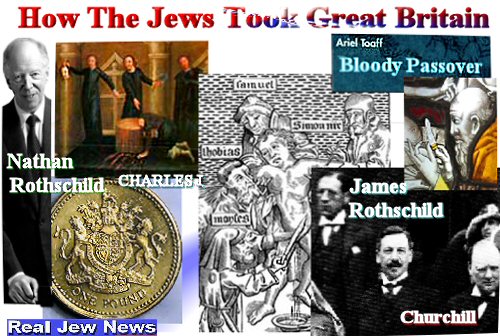 Or Send Your Contribution To:
Brother Nathanael Kapner; PO Box 547; Priest River ID 83856
E-mail: bronathanael@yahoo.com
IT ALL STARTED with The Edict of Expulsion of 1290 AD.

The Jews would have us believe that their expulsion from England by Edward I (reigned 1272-1307) was due to their money lending endeavors. The real reason was due to the Jews’ crime of blood ritual murders.

The Orthodox Christian historian of the 5th Century, Socrates Scholasticus, in his Ecclesiastical History, 7:16, recounts an incident about Jews killing a Christian child:

— “At a place near Antioch in Syria, the Jews, in derision of the Cross and those who put their trust in the Crucified One, seized a Christian boy, and having bound him to a cross they made, began to sneer at him. In a little while becoming so transported with fury, they scourged the child until he died under their hands.” —

Here are a few examples which led to the English expulsion of the Jews in 1290 AD:

1144 A.D. Norwich: A twelve year-old boy was crucified and his side pierced at the Jewish Passover. His body was found in a sack hidden in a tree. A converted Jew to Christianity named Theobald of Cambridge informed the authorities that the Jews took blood every year from a Christian child because they thought that only by so doing could they ever return to Palestine. The boy has ever since been known as St. William.

1160 A.D. Gloucester: The body of a child named Harold was found in the river with the wounds of crucifixion.

1255 A.D. Lincoln: A boy named Hugh was tortured and crucified by the Jews. The boy’s mother found the body in a well on the premises of a Jew named Jopin. 18 Jews were hanged for the crime by King Henry III.

1290 A.D. Oxford: The Patent Roll 18 Of Edward I, 21st June 1290 contains an order for the Gaol delivery of a Jew named Isaac de Pulet for the murder and blood letting of a Christian boy. Only one month after this, King Edward I issued his decree expelling the Jews from England.
(See Sources #1 Below ) 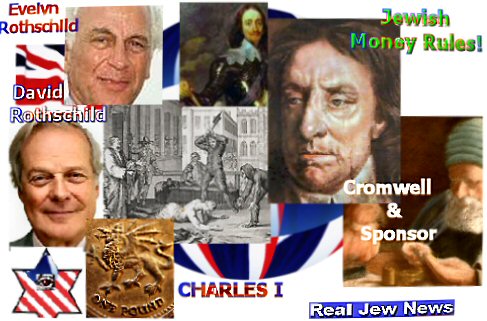 JEWISH BANKERS FROM AMSTERDAM led by the Jewish financier and army contractor of Cromwell’s New Model Army, Fernandez Carvajal and assisted by Portuguese Ambassador De Souza, a Marano (secret Jew), saw an opportunity to exploit in the civil unrest led by Oliver Cromwell in 1643.

A stable Christian society of ancient traditions binding the Monarchy, Church, State, nobles and people into one solemn bond was disrupted by Calvin’s Protestant uprising. The Jews of Amsterdam exploited this civil unrest and made their move. They contacted Oliver Cromwell in a series of letters:

Cromwell To Ebenezer Pratt of the Mulheim Synagogue in Amsterdam,
16th June 1647:

— “In return for financial support will advocate admission of Jews to England: This however impossible while Charles living. Charles cannot be executed without trial, adequate grounds for which do not at present exist. Therefore advise that Charles be assassinated, but will have nothing to do with arrangements for procuring an assassin, though willing to help in his escape.” —

To Oliver Cromwell From Ebenezer Pratt, 12th July 1647:
— “Will grant financial aid as soon as Charles removed and Jews admitted. Assassination too dangerous. Charles shall be given opportunity to escape: His recapture will make trial and execution possible. The support will be liberal, but useless to discuss terms until trial commences.” —

Cromwell had carried out the orders of the Jewish financiers and beheaded, (yes, Cromwell and his Jewish sponsors must face Christ!), King Charles I on January 30 1649.

Beginning in 1655, Cromwell, through his alliance with the Jewish bankers of Amsterdam and specifically with Manasseh Ben Israel and his brother-in-law, David Abravanel Dormido, initiated the resettlement of the Jews in England.
(See Sources #2 Below ) 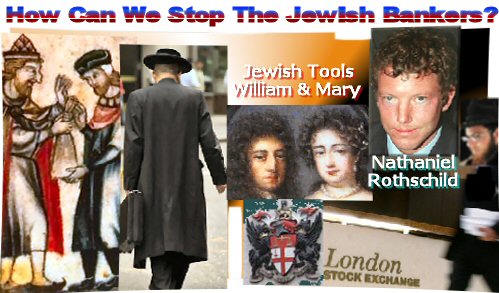 JEWS GET THEIR CENTRAL BANK OF ENGLAND

WILLIAM STADHOLDER, a Dutch army careerist, was a handsome chap with money problems. The Jews saw another opportunity and through their influence arranged for William’s elevation to Captain General of the Dutch Forces. The next step up the ladder for William was his elevation by the Jews to the aristocratic title of William, Prince of Orange.

The Jews then arranged a meeting between William and Mary, the eldest daughter of the Duke of York. The Duke was only one place removed from becoming King of England. In 1677 Princess Mary of England married William Prince of Orange.

To place William upon the throne of England it was necessary to get rid of both Charles II and the Duke of York who was slated to become James II of the Stuarts. It is important to note that none of the Stuarts would grant charter for an English national bank. That is why murder, civil war, and religious conflicts plagued their reigns by the Jewish bankers.

In 1685, King Charles II died and the Duke of York became King James II of England. In 1688 the Jews ordered William Prince of Orange to land in England at Torbay. Because of an ongoing Campaign of L’Infamie against King James II contrived by the Jews, he abdicated and fled to France. William of Orange and Mary were proclaimed King and Queen of England.

The new King William III soon got England involved in costly wars against Catholic France which put England deep into debt. Here was the Jewish bankers’ chance to collect. So King William, under orders from the Elders of Zion in Amsterdam, persuaded the British Treasury to borrow 1.25 million pounds sterling from the Jewish bankers who had helped him to the throne.

Since the state’s debts had risen dramatically, the government had no choice but to accept. But there were conditions attached: The names of the lenders were to be kept secret and that they be granted a Charter to establish a Central Bank of England. Parliament accepted and the Jewish bankers sunk their tentacles into Great Britain. 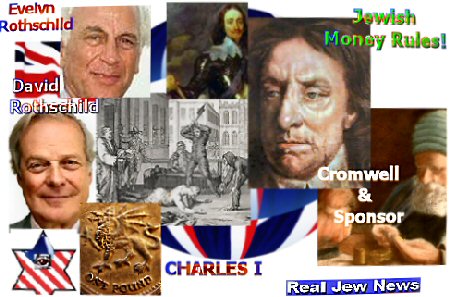 The smartest of his sons, Nathan, was sent to London to establish a bank in 1806. Much of the initial funding for the new bank was tapped from the British East India Company which Mayer Rothschild had significant control of. Mayer Rothschild placed his other four sons in Frankfort, Paris, Naples, and Vienna.

In 1814, Nathanael Rothschild saw an opportunity in the Battle of Waterloo. Early in the battle, Napoleon appeared to be winning and the first military report to London communicated that fact. But the tide turned in favor of Wellington.

This gave the Rothschild family complete control of the British economy - now the financial centre of the world and forced England to set up a revamped Bank of England with Nathan Rothschild in control.
(See Sources #4 Below ) 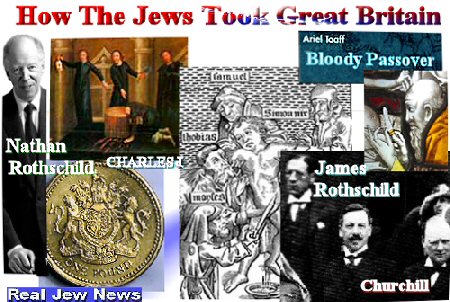 A PRIVATE FINANCIAL CORPORATION exists today in England known as “The City.” It is also known as The Jewish Vatican located in the heart of Greater London.

A Committee of 12 men rule The Jewish Vatican. They are known as “The Crown.” The City and its rulers, The Crown, are not subject to the Parliament. They are a Sovereign State within a State.

The City is the financial hub of the world. It is here that the Rothschilds have their base of operations and their centrality of control:


Every year a Lord Mayor is elected as monarch of The City. The British Parliament does not make a move without consulting the Lord Mayor of The City. For here in the heart of London are grouped together Britain’s financial institutions dominated by the Rothschild-controlled Central Bank of England.

The Rothschilds have traditionally chosen the Lord Mayor since 1820. Who is the present day Lord Mayor of The City? Only the Rothschilds’ know for sure…
(See Sources #5 Below )

HOW CAN WE STOP THE JEWISH BANKING CABAL?

Here is what we must do to stop the Jews:

*** Only a strong Christian society can counteract the Jewish financiers of the world.

*** We must all make a commitment to Jesus Christ as Lord and Saviour and regular Church attendance.

*** Ron Paul wants to abolish the Federal Reserve Bank which is part of the Jewish financial Cabal. We must all support him.

Sources #5: E.C. Knuth, The Empire of The City; Des Griffin, Descent Into Slavery