Should US Bail Out Jewish Bankers? 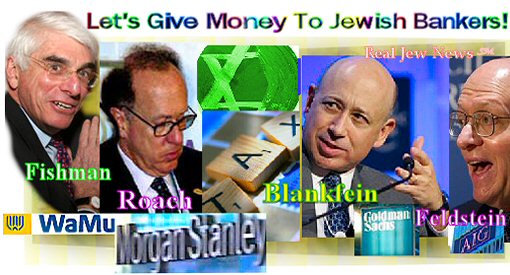 SHOULD US BAIL OUT JEWISH BANKERS?
By Brother Nathanael Kapner, Copyright 2008-2010

Unique Source: Americans Must Break The Bank @ Rense.com Here
“HAVE A HEART - SAVE A HEDGEFUND!” the sign said as it was carried about by protesters in front of the New York Stock Exchange on September 25 2008.

Millions of Americans are up in arms over the “bailout,” decrying it as an illegal power grab by Jewish bankers and their puppets in the Bush administration. Hank Paulson, the Secretary of the US Treasury, is himself the former Chairman of the Jewish bank, Goldman Sachs, one of the banks asking for a free lunch from the “dumb goyim” US taxpayers.

But would a Jewish banker ever buy a free lunch for a down-and-out “goy?” Never. Go ahead, just ask a Jewish banker to help you get out of debt — and if you are willing to give him your house and car and all of your assets — he may lend you a few thousand bucks and at 23.89% interest at that.

Here is a list of wealthy Jewish bankers looking for a free lunch from US taxpayers:

The question must be asked my dear fellow Americans, “Why should we give hard-earned money to wealthy Jewish bankers who are multi-millionaires? Huh?” 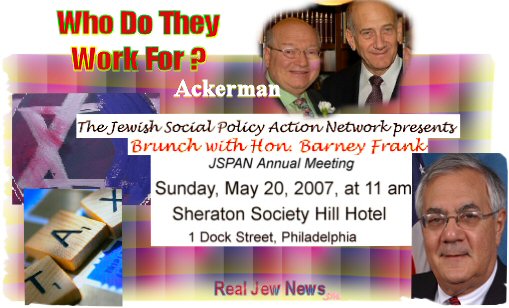 THE HOUSE FINANCIAL SERVICES COMMITTEE has two Zionist Jews on it leading the push for the biggest rip off the US government has ever foisted on American taxpayers.

These two Zionist Jews are Barney Frank, (D-MA), the Chairman of the House Financial Services Committee, and Gary Ackerman (D-NY). These two are Zionist Jews. And Zionist Jews look out for Jewish interests before America’s.

One of the ploys of manipulation & bribery by the powerful Jewish Lobby is to send Senators & Congressmen on lavish trips to Israel. In January of 2007, the issue of these trips was ‘discussed’ in Congress. But Barney Frank made sure that the Congressional junkets to Israel would continue.

NY Congressman Gary Ackerman is another bought politician by the Jews. The American Israel Public Affairs Committee (AIPAC) has a special Web Site promotion of Ackerman — just for him! Why? He’s been bought, that’s why.

For More See: “Is The Bailout A Rothschild Trick?” Click Here

And: “The Dollar Drops - The ‘Amero’ Cometh?” Click Here