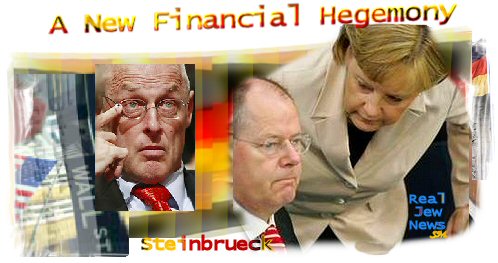 Unique Source: America’s Engineered Decline @ Rense.com Here
“THE US WILL LOSE ITS STATUS as the superpower of the global financial system,” the German Finance Minister, Peer Steinbrueck, told lawmakers in Berlin on September 25 2008.

“The global financial system will become multipolar. Banks from Asia, Europe, and the Middle East, will play a bigger role in the new financial world. The Anglo-American financial system is the origin of the crisis which is spreading worldwide like a poisonous oil spill.”

So far, so good, perhaps. But most alarming is Steinbreuck’s call for international controls by an “international financial authority:”

“America will not be the only power to define which standards and which financial products will be traded all over the world.

For me the answer is internationally agreed regulation by the global financial community because the crisis goes beyond measures that can be taken by nation states.

I will leave it open at this point whether all this means we’ll have an international financial authority that will make the traffic rules for financial markets.” Here & Here. 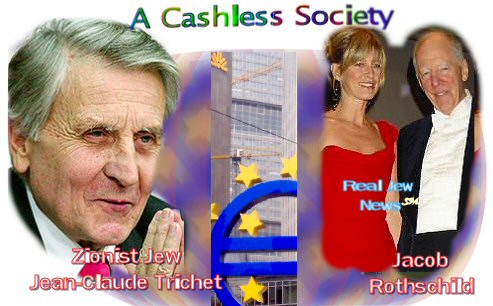 WHAT COULD AN INTERNATIONAL FINANCIAL AUTHORITY mean but the monolithic control over all nations both economically & politically by the Zionist Jews?

The “international Jew,” centered in the banking family known as the Rothschilds who control the European Central Bank in Frankfurt Germany, will rule the world.

The President of the European Central Bank is the Zionist Jew, Jean-Claude Trichet, who at the Bilderberg Conference in Virginia, June 5-8 2008, announced a plan for an “internationally controlled cashless society.”

With the collapse of Wall Street’s monetary system, the prospect of European nations rallying around the economically-strong Germany is likely. Such a scenario would cause Germany to become the new center of financial hegemony with the Rothschilds at the helm. Europe would then accelerate into uniting economically, politically, and militarily, in a very short period of time.

CALLING FOR AN END of laicite,’ which denotes, “separation of church & state,” Pope Benedict urged Europeans to, “look back to its intellectual roots in Christian monastic culture,” during his visit to France on September 12 2008.

In his meeting with President Nicolas Sarkozy, Pope Benedict discussed Europe’s policy of separation of church and state:

“Religion and politics should be open to each other. Religion is essential for the creation of a basic ethical consensus in society as well as the formation of conscience” Here.

Now that the American psyche has been deflated due to the current financial crisis, a burgeoning & optimistic Europe could very possibly emerge.

Would to God that the “intellectual roots” of European civilization, that is, the “monastic Christian culture,” would come home to roost in the “Catholic” consciousness of the European peoples!

And: “Bilderberg Group: A Jewish Who’s Who!” Click Here