Is Putin A True Christian Leader? 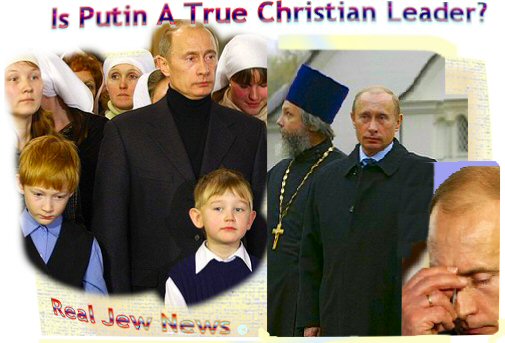 Unique Source: “Why The CFR Hates Putin” @ Rense.com Here
THE ZIONIST CONTROLLED WESTERN MEDIA has been waging a savage campaign against Vladimir Putin for the last 8 years.

Yet the Zionist controlled media had nothing but praise for Boris Yeltsin who misgoverned Russia and appointed Jewish oligarchs and their Harvard Jewish friends as his “economic advisors” who looted Russia under the cover of the so called “privatizing” of Russia’s industries.

Upon Putin’s ascendancy to the presidency of Russia, Time Magazine acknowledged that Putin was secretly baptized by his mother into the Russian Orthodox faith when he was born in 1952.

But even Putin’s own admission to being baptized during Russia’s Soviet era was glossed over by Time Magazine.

Instead of applauding Putin for his open Christian confession, the Jewish owned Time Magazine, (the Bronfman family owns the Time-Warner conglomerate), smeared Putin as a “colorless, ordinary man with prying eyes and expressionless face, a KGB spy who built his career on being a nonentity.”

But Putin’s “nonentity” status has gone by the wayside. Today, Vladimir Putin stands tall as a giant - not only on the world’s political and economic scene, but in the spiritual realm as well. In his own words during an Easter Service at Christ The Saviour Cathedral on April 27 2008, Putin assured the Russian people saying:

— “This holiday shows just how important national traditions and spiritual values are for our people. The state will continue to provide all possible support to the Church aimed at the enlightenment and moral education of Russian citizens.” — Here.

The Russian hierarch, Metropolitan Kirill, head of External Church Relations, is convinced, as thousands of Orthodox Christians, (myself included), that Vladimir Putin is a deeply believing Christian man. 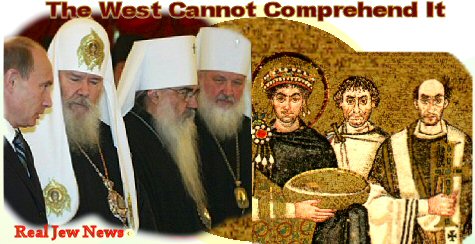 A SYMPHONY BETWEEN CHURCH & STATE

IN ORTHODOX CHRISTIAN HISTORY & TRADITION a “symphony” between Church & State has been the ideal.

This is something that the secular West cannot comprehend. In contrast with the West, Orthodox civilization developed its own model of Church & State relations. This model was called a ’symphony’ by Byzantine Emperor Justinian in his 6th Century Legal Code.

Putin, in beneficent Orthodox Tsar-like manner, often makes appearances with the leader of the Russian Orthodox Church, Patriarch Alexy II. In so doing, Putin affirms the Church’s political-religious tradition of a symphony between Church & State. On November 18 2007, Putin met with Alexy II and other hierarchs of the Church in St Alexander’s Chapel in the Kremlin. At this meeting Putin promised:

— “Orthodoxy has always played a special role in shaping our statehood, our culture, our morals. One should not completely draw a line between the culture and the Church. Of course, in our country the Church is separate from the State. But in the soul and the history of our people it’s all together. It always has been and always will be.” — Here & Here.

In another political/religious affirmation of Russia’s “symphony” between Church & State, Putin appeared with Alexy II at a Kremlin meeting in November of 2007. At this meeting, Putin was photographed with Alexy II who called for “tighter controls on the content of television and radio broadcasts” saying they were promoting “vicious behavior.”

In Russia, everyone understands the meaning of Putin’s photographs with others - the above photograph included. It translates into Putin’s agreement with those personages. And Putin surely is in “agreement” with Patriarch Alexy II in building a healthy society based on Church tradition - just as he has promised so many times. 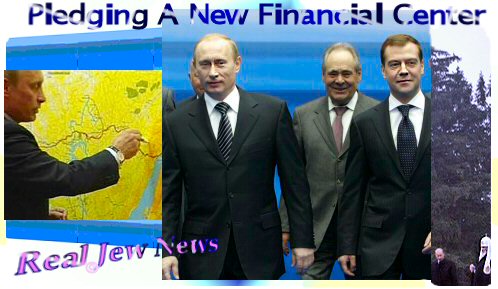 PUTIN AS A CHRISTIAN STATESMAN

HARPING ON THE ISSUE OF “DEMOCRACY” in Putin’s Russia is a continual drone of the Zionist controlled West. Recently, presidential candidate John McCain joined in on the mantra calling for Russia’s exclusion from the G-8. Putin’s rebuff to McCain through a top ambassador was telling McCain to “forego your threats until after you’re elected.”

— “Rather than talking about democracy in Russia let the West be specific about the issues that matter. If they are worried about nuclear programmes in Iran, let’s talk about Iran together. If they want us to resolve Kosovo, let’s talk Kosovo. We will gladly participate in any debate with our partners.” — Here.

Prime Minister Vladimir Putin is not one to throw his words to the wind. On May 9 2008 Putin pledged to transform Russia into a financial world leader, saying: “I will work to make Russia one of the main financial centers in the world.”

Thus if money is what makes the world go ’round, Putin’s pledge to make Russia a center of world finance could very likely give the Zionist international bankers some good healthy competition. And for us all — an alternative to the Zionist world wide agenda…

And: “Why Jews Fear Putin As Prime Minister” Click Here