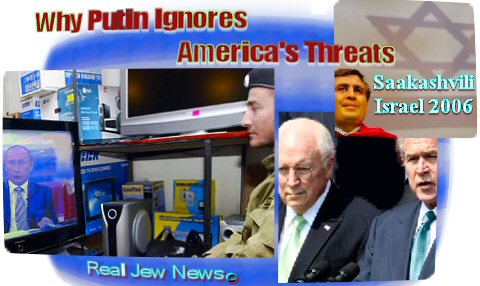 Above Right: Saakashvili At Haifa University Israel During A Conference
About Global Political Trends, October 31 2006
Here

Unique Source: “Jewish Supremacism Is Destroying America” @ Rense.com Here
BUSH & CHENEY ARE NOT HAPPY CAMPERS these days. Things are just not going their way with regard to the ongoing Georgian conflict. On August 11 2008, Bush threatened Vladimir Putin, saying that “Russia has jeopardized its relationship with the West by invading a sovereign state and such an action is unacceptable in the 21st century.” (Certainly, Putin is not unaware that Bush invaded two sovereign states, Afghanistan & Iraq, in the 21st century.)

Then Cheney got in on the bombast by vowing that “Russian aggression must not go unanswered.” Bush/Zionist Secretary Of State Condi Rice followed up by actually threatening Russia with ‘isolation’ if it fails to obey US demands for an end to the conflict in Georgia. But it has all fallen on Russian deaf ears.

To be sure, the diminishing ability of America to influence the course of international events is now on display for all the world to see. Many cite the strong Zionist influence over America’s foreign policy for this development. And this Zionist influence has not been lost on Vladimir Putin nor on the people he rules.

Putin was critical of the Zionist prompted American invasion of Iraq in 2003, saying that the invasion could not be justified because it “did not have the backing of the international community.” And with regard to America’s threats against Iran in behalf of their Zionist client, the State of Israel, Putin made the following reproof to America after his October 2007 visit to Iran:

— “Direct dialogue with the leaders of states around which certain problems accumulate is always more productive and is the shortest path to success than a policy of threats, sanctions, and a resolution to use force.” — Here 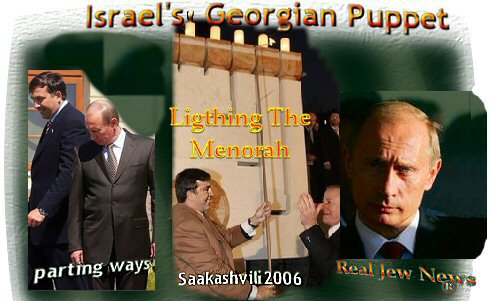 ON AUGUST 10 2008, Georgia’s President, Mikhail Saakashvili, announced that “Moscow sought to oust him.” This announcement followed on the heels of a UN Security Council session at which the US Ambassador challenged Russian Ambassador by asking: “Is your government’s objective regime change in the democratically elected government of Georgia?”

The Russian ambassador responded: “‘Regime change’ is an American expression. We do not use such an expression. But sometimes there are occasions that there are different leaders who come to power, either democratically or semi-democratically, and they become an obstacle.” (Touche!)

Moscow’s gripe against Saakashvili is that he militarized Georgia with Israeli arms, military training, and money, in order to threaten both Russia and the breakaway provinces, South Ossetia and Abkhazia, which seek Moscow’s protection.

Putin, speaking to officials on state television on August 11 2008, mocked the support given by the West to Saakashvili, contrasting the West’s treatment of Saakashvili to their treatment of Saddam Hussein, saying:

— “They of course had to hang Saddam Hussein. But the current Georgian ruler who in one hour simply wiped 10 Ossetian villages from the face of the earth, who used tanks to run over children and the elderly, who threw civilians into cellars and burnt them - this Georgian leader is a player that has to be protected by the West.” — Here.

And this “protection” by the Zionist controlled West of Saakashvili, Israel’s puppet, is something that Putin not only ignores, but has proven it to be a shelter full of holes…

And: “Why Jews Fear Putin As Prime Minister” Click Here