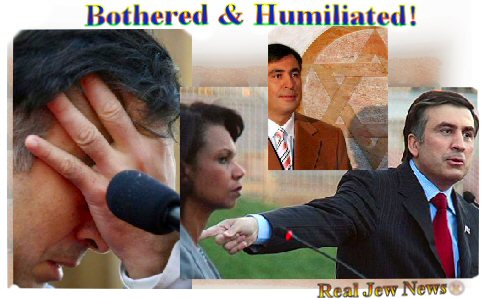 Unique Source: The Blowback From Bear-Baiting @ Rense.com Here
“A HUMILIATED & SULKING Georgian President Mikhail Saakashvili accused the West of all but encouraging Russia to overrun his country as he grudgingly signed a truce with Russia on August 15 2008,” reported Associated Press. Standing alongside Saakashvili, Bush/Zionist Secretary Of State Condoleezza Rice demanded that Russian troops “withdraw immediately from Georgia.” (Doesn’t Rice realize that Russia does not march to her tunes?)

Bush also had some tough words for Russia, accusing Moscow of “bullying and intimidation.” (Doesn’t Bush realize that Russia laughs at his hypocrisy?)

Rice & Bush’s ‘war of words’ is not matched by Europe with its reticence to speak out against Russia - which recently announced a further increase of gas exports to the continent. Indeed, Europe fears alienating its provider of hot showers.

Ignoring Saakashvili’s rebuke, Rice again demanded that Moscow withdraw its forces. But while Rice lectured and Saakashvili sulked, a Russian convoy advanced to within 34 miles of Tbilisi, Georgia’s capital.

Then taking the cue from Rice’s bravado, Saakashvili waxed defiant himself. He vowed that “one day Georgia would beat Russia.” (Doesn’t Saakashvili realize that the West has lost its nerve to counter the Russian bear?) 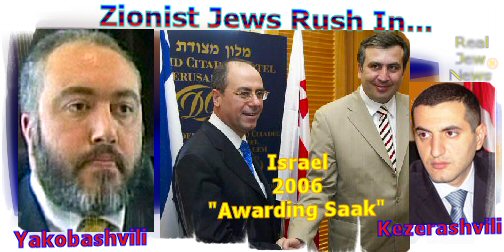 SAAKASHVILI CALLS GEORGIANS
“THE JEWS OF OUR TIME”

RUSSIA HAS BEEN KEEPING TABS on Israel’s “interest” in Mikhail Saakashvili for quite some time. The Russian news agency Kommersant made some pointed remarks regarding Saakashvili’s visit to Israel in late autumn of 2006:

— “The Georgian leader met with all of the senior officials in the Israeli government and received an honorary doctorate from the University of Haifa. In his acceptance speech Saakashvili called Georgians “the Jews of our time.” He compared President Putin’s anti-Georgian policies to the anti-Semitic campaigns of Russian Empress Catherine I.” — Here.

In more recent days, Saakashvili admitted that Israel has been militarizing Georgia just as Russia has been contending. Here’s what Saakashvili said at a press conference during the early days of the fighting:

— “Israeli weapons have proved very effective. We have two Israeli cabinet ministers, one deals with war [Defense Minister David Kezerashvili], and the other with negotiations [Minister for Territorial Integration Temur Yakobashvili]. Both war and peace are in the hands of Israeli Jews.” — Here.