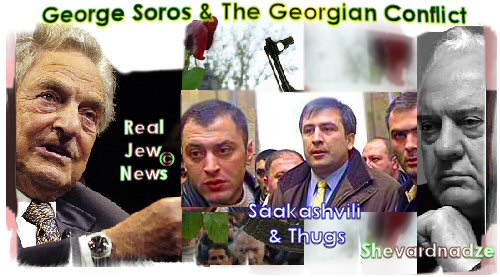 Soros installed Shevardnadze’s young protege, Mikhail Saakashvili, as the new and current President of Georgia. During the three months before the coup, Saakashvili, who was schooled & groomed in America, was glorying in lavish treatment from the Zionist led US State Department and the Jewish controlled media. And in the previous summer Soros had flown Saakashvili and his followers to a “revolution training seminar” in Belgrade Serbia.

Back in Georgia from his training by Soros in Belgrade, Saakashvili led thousands of demonstrators brandishing fresh red roses in their takeover of the President’s palace. This occurred in the freezing Georgian winter when fresh roses had to be flown in — courtesy of the Jew, George Soros, who had spent $42 million on his new Georgian puppet. No sooner had Saakashvili taken office that he vowed to bring the Russian supported South Ossetia & Abkhazia breakaway provinces back under Georgian control.

Soros and the US State Department, indeed, had publicly committed themselves to propping up the current anti-Russian Georgian President, Mikhail Saakashvili, considered by many to be an authoritarian thug. A confrontation between Russia and the US was now in the works. And it has come to a head with the recent conflagration in South Ossetia. 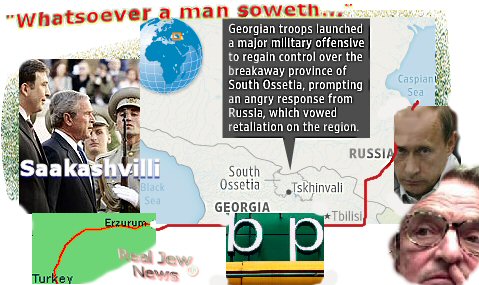 AMERICA’S PRO GEORGIAN POLICY is explained by Georgia’s access to the Caspian Sea’s oil wealth. The US backed British Petroleum (BP) pipeline, running from the Caspian Sea through Georgia, then below the Black Sea into Turkey, delivers oil to Europe and the US. The US & its European allies have been competing with Russia for control of the Caspian oil rich region.

The pipeline runs only 60 miles south of the South Ossetian capital, Tskhinvali, which sits right smack in the middle of northern Georgia. South Ossetia broke away from Georgia in the early 1990s and exists as an independent state with full Russian support. Most South Ossetian residents hold Russian passports.

The US considers Georgia as an ally and supports its desire to join NATO and the EU. Moscow opposes both goals. Georgia’s pro Western stance has riled Russia because Moscow regards the entire region as its own sphere of influence.

In April 2002, the US started the “Georgia Train and Equip Program” which involved US training of Georgian forces. Soon after, Georgian militaries were sent to Iraq to form part of the US/UK occupation forces there. With regard to the current South Ossetia conflict, the US has been supplying Georgia with both equipment and military advisers. And Russia is now accusing the US of orchestrating the war.

Moreover, the US partner in Zionist international hegemony, the State of Israel, assisted Georgia in its August 8 2008 attack on the South Ossetian capital, Tskhinvali, with a bevy of its own military advisers. This brought the conflict to a military climax.

Thus, Georgia will continue to be a cold war hotspot with Russia and the US competing to control the Caspian oil bonanza. And the Jew, George Soros, and his puppet, Mikhail Saakashvili, have brought this new cold war centered in Georgia to a boiling head.


And: “US State Department Is Run By Jews” Click Here