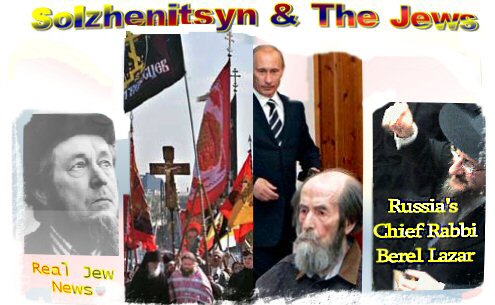 A proponent of Russia’s special mission in the world, Solzhenitsyn often expressed how the Jews have negatively impacted on Russia’s destiny.

— “The faith of our Church is the foundation and support of one’s life. And don’t forget what a horrible human toll the Russian Orthodox Church suffered throughout almost the entire 20th century. The Church is just rising from its knees.” — Here.

This suffering of the Russian Orthodox Church is one of the topics Solzhenitsyn discusses in his magnum opus, “Two Hundred Years Together.” Labelled by Jews as “Anti Semitic” and banned from publication in English by the Simon Wiesenthal Centre, (that wicked enemy of free speech), the book charges Bolshevik Jews with the guilt of the Church’s suffering in the 20th century.

The Jewish attack on Solzhenitsyn has its roots in the ongoing battle of the synagogue against the Church. In his 1995 essay, “The Russian Question At The End Of The Twentieth Century,” Solzhenitsyn wrote:

— “Russian nationality is not about blood but about spirit. The greatness of our people is to be sought in its inner development, in its breadth of soul. The Russian spirit and Russian culture have existed for centuries. All those who feel themselves part of this heritage in spirit are true Russians” — Available Here.

Jews do not feel themselves part of Russia’s “heritage in spirit” which is Christian and to them, “Anti Semitic.” But in the current battle between the synagogue and the Church, (at least in Russia — not in the Jewish occupied West), the Church is winning. 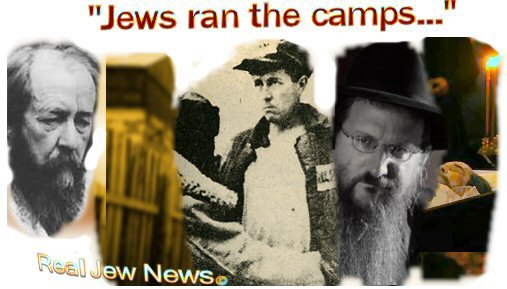 SOLZHENITSYN: ‘THE GULAG WAS RUN BY JEWS’

SPEAKING FROM FIRST HAND EXPERIENCE, Solzhenitsyn gave a candid account of Jews in charge of the Soviet prison camps in his book, Two Hundred Years Together. According to his observations, Jews made up a clear preponderance in the Gulag administration.

Digging deeper into Russo-Jewish Soviet history, Solzhenitsyn demonstrates in the book that the Jewish community’s positive response to the Jewish led sovietization that overran Russia and Eastern Europe is the crux of the issue between Russians and Jews. He asks the question, “What was the reaction of this groups’ larger community to the traitors of Russia within its ranks?” World Jewry’s reply is to call Solzhenitsyn an “Anti Semite.”

In Volume II of Two Hundred Years Together, Solzhenitsyn writes that “Jews could have simply subordinated themselves quietly to Soviet ideology as a recourse over German fascism, but instead, embraced Bolshevism wholeheartedly.” Solzhenitsyn goes on to censure the Jews for their “impiety in contributing to atrocities in a country in which they were an ethnic minority.”

And with the voice of a Christ figure, Solzhenitsyn called on the entire Jewish community to “repent.” He cried out, “It is within the power of the Jews to break out of their pale of doom.” But sad to say, to repent is something most Jews do not very much like to do…

And: “Jewish Murderers Of The Russian Revolution” Click Here