The Zionist Hate Campaign Against Russia

The Zionist Hate Campaign Against Russia 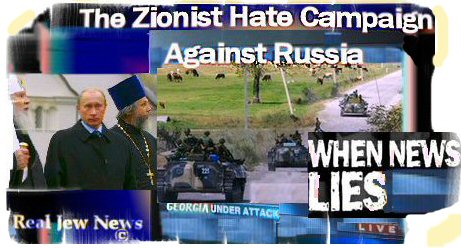 Unique Source: The Genocide Of Russian Orthodox Christians In South Ossetia @ Rense.com Here
THE JEWISH-OCCUPIED AMERICAN MEDIA is subjecting the American people to yet another episode of their Zionist brainwashing. And this is with regard to the current Georgian conflict.

The fact that Georgia invaded the Moscow-leaning province of South Ossetia–and that Russia countered the attack in order to protect the mostly Russian citizens residing there–is news that is hard to come by.

In an interview with Ria Novosti on August 10 2008, Russian Deputy Foreign Minister Grigory Karasin accused foreign media of pro-Georgian bias in their coverage of the Georgian war:

— “Why don’t television screens in the West show the suffering of the Ossetian people, the murdered elderly people and children, and the destroyed civilian towns? Western media’s coverage of the events is a politically motivated version, to put it mildly.” — Here.

And where were the Jewish media moguls when on August 8 2008, Russia agreed to a UN Security Council statement calling for an immediate cease fire but was blocked when the US objected to a phrase that would have required both sides “to renounce the use of force?” The meaning of this is clear: the US was backing Saakashvili’s invasion. But the Zionist Jews who run the media will tell us only what they want us to hear. 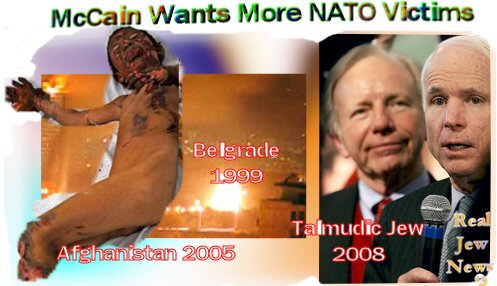 IT’S NOT HARD TO GUESS what a McCain presidency will mean should he be elected. For given McCain’s latest bombast against Russia in a speech in Des Moines on August 7 2008, we will have yet another warmonger in the White House.

In similar language that McCain used when calling for NATO to bomb Serbia in 1999, McCain is pounding the war drums once again, this time against Russia:

— “We should immediately call a meeting of the North Atlantic Council to assess Georgia’s security and review measures NATO can take to contribute to stabilizing this very dangerous situation” — Here.

Calling on NATO to fight another war besides their unlawful invasion with the US in Afghanistan is not only wicked but will serve to enrage Russia even further. For it is NATO that Moscow is opposing owing to its creeping encroachment upon Russia’s borders.

McCain also demanded that “the US should immediately convene an emergency session of the United Nations Security Council to call on Russia to reverse course.” But McCain had no idea, (hardly anyone else did as shown above), that Russia already tried doing exactly what McCain called for –- but got rejected by the Zionist controlled Bush Administration.

In Other Words, The Jewish-Occupied American Media
Tell Zionist Stooges Like McCain Only What They Want Them To Know and say…

For The Best Coverage Of The Georgian Conflict Click Rense.com Here
For More See: “How Jews Control The American Media” Click Here

And: “The Zionist War Party In America” Click Here