Putin’s Move Into The Middle East 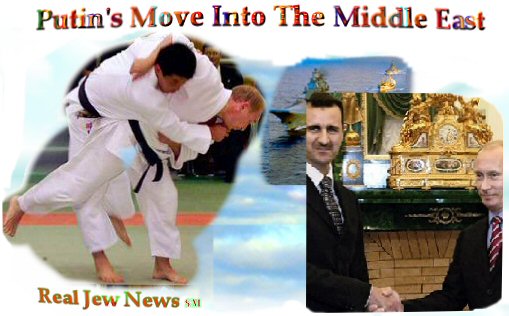 Unique Source: The Zionist West Has Met Its Match @ Rense.com Here
PUTIN IS A GRAND MASTER of the Japanese discipline known as Judo. A distinctive mark of a Judo expert is “inscrutability.” This is a trait that Vladimir Putin is known for.

Performing before Japanese Judo masters in Tokyo, Putin displayed a technique used by smaller men facing larger opponents — an inner leg throw that dumps the opponent backward. The key to an effective inner leg throw is “inscrutability” - the opponent must not be aware that it is coming.

Thus to understand Vladimir Putin one must be able to penetrate into the manner of an “inscrutable” warrior. For example, on August 8 2008, Putin’s political party, United Russia, opened a branch in Israel in an exchange with Israel’s ruling Kadima party, which opened a branch in Moscow.

To many, Putin’s decision is interpreted as a concession to Zionist interests. But those who penetrate deeper into the motives of a Judo master might look for a “leg throw” regarding this move.

More than 1,000,000 Russian Jews reside in Israel today. At least 100,000 of them are Russian Orthodox Christians who enjoy the use of many church properties in Israel owned by the Moscow Patriarchate. (Here & Here & Here.) Thus, it should be obvious to all, that Putin seeks to throw back his Zionist opponent by possessing a greater influence in their own territory. 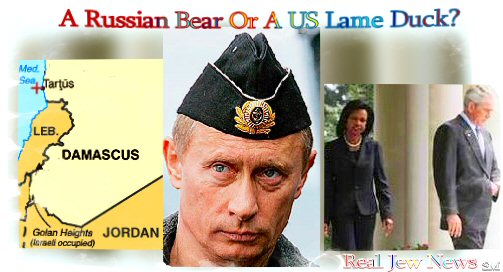 A POWERFUL NAVAL CONTINGENT led by the aircraft carrier Admiral Kuznetsov left Murmansk on the Barents Sea on August 18 2008 to dock at the Syrian port of Tartus on August 23 2008. The contingent included the Russian Navy’s biggest missile cruiser Moskva and at least four nuclear missile submarines.

At the Black Sea resort of Sochi, Syrian President Bashar Assad told reporters on August 21 2008 that the Tartus port will be converted into a permanent Middle East base for Russia’s nuclear-armed warships. He also said that he is considering a Russian request to deploy missiles in his country in view of Russian-Western tensions over the Georgian conflict which he said had polarized East and West anew.

Senior US officials severely criticized Syria after Assad voiced his country’s support of Russia in its military conflict with Georgia, saying that Syria should keep out of issues that don’t pertain to them.

But many Israelis expressed frustration with what they said amounted to the US abandoning Israel’s allies in Georgia owing to its impotence to face down Russia. And now, Putin is attempting to get the Zionist West to rethink the geopolitical dynamics surrounding the Middle East conflict between Israel and its neighbors, or more accurately, between Israel and the entire world.

And with Putin establishing a presence in what the US likes to consider its own backyard in the Middle East, the Israelis are themselves rethinking with whom they need to make friends with: A Russian bear? Or a US lame duck?

And: “Putin Vs The Jews Of The New World Order Jews” Click Here