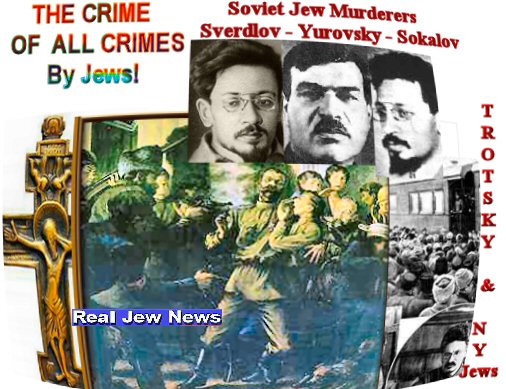 THAT JEWS MURDERED THE RUSSIAN ROYAL FAMILY was the greatest travesty beside the crucifixion of Jesus Christ in the history of mankind.

The Russian Imperial Family of Tzar Nicholas II were pious Orthodox Christians. They exemplified all that is precious in a family, namely, Christian piety and love for one’s neighbor.

But the Anti-Christ Jews murdered this preciousness! From then on the world has witnessed and felt the effects of the decline of the family - the staple of an ethical, Christian society. But Anti-Christian Jews, like Jacob Schiff, Chairman of Kuhn & Loeb Bank, who financed the Bolshevik Revolution, have wreaked their destruction on Christian civilization.

It was this Jew, Jacob Schiff, who brought Leon Trotsky (born “Lev Bronstein”) to New York in February 1916. Trotsky recruited Russian Jews from New York’s Russian Jewish immigrant population in the Lower East Side of Manhattan and trained them as revolutionaries.

On March 27 1917, Trotsky and his 300 well-trained Jewish communists from Manhattan’s Lower East Side, boarded the Norwegian steamer “Kristianiafjord” for a journey that brought them to St. Petersburg in Russia.

Their purpose was to establish a Marxist government under the leadership of Lenin, Trotsky, and Stalin. Before departing, Jacob Schiff gave this group $20 million in gold. 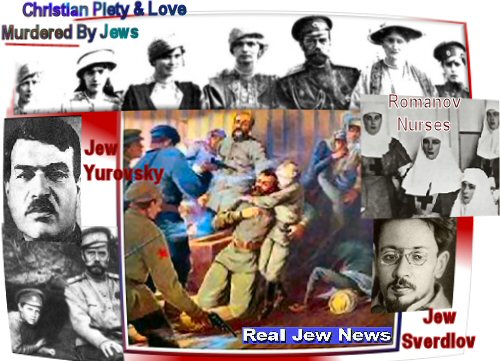 With support from inside the Social Democratic party and many of the Jewish-run soviets, Lenin, joined by Trotsky from New York, gained the upper hand over the Kerensky government.

In August of 1917, the Russian Royal Family fled to Tobolsk in Siberia. They stayed at the Governors House until April 1918. They hoped to escape to England where King George V, a Romanov cousin, would hopefully grant them refuge. But he refused due to pressure from Jewish groups.

On April 22 1918, the Jew, Jacob Sverdlov, first President of the Soviet Union, sent his aide, the Jew, Yankel Yakovlev, to Tobolsk to persuade Tzar Nicholas II to agree to sanction the Brest-Litovsk peace treaty. Tzar Nicholas refused for he considered the treaty an ‘eternal disgrace to Russia.’ He did though agree to return to Moscow as he was told that the Germans were willing to grant him asylum.

They got as far as Ekaterinburg in the Urals where the train was halted by the Regional Soviets dominated by four Jews, Goloshchekin, Safarov, Voikov and Syromolotov. These four communist Jews appointed the Jew, Jacob Yurovsky, son of a local Jewish ex-convict, as the head the local Cheka (Soviet Secret Police) in Ekaterinburg. Yurovsky was given the assignment to imprison, plan, and carry out, the assassination of the Russian Royal Family.

The Jew Yurovsky brought the Russian Royal Family to a former house of a wealthy Jewish merchant named Ipatiev, now made into a prison for the Tzar and his family. It should be noted that Ekaterinburg, named after named after St Catherine the Great, was renamed “Sverdlovsk” in 1924 in honor of Jacob Sverdlov who gave the final order to execute the Russian Royal Family.

On July 15 1918, two representatives from the Soviet Extraordinary Commission, one of them being the Jew, Philip Golochtchekine, came to the Ipatiev house with an order from the Jew Jacob Yurovsky to execute the Russian Royal Family.

On July 17 1918, about midnight, the Jew Yurovsky brought Tzar & Tzarina Nicholas and Alexandra, and their four daughters, the maid, the doctor, the cook, and the waiter to the basement. The Tzar carried the heir Alexei in his arms. They were told that they were to pose for a group picture. The Jewish assassins, Medvedev, Nikulin, Yermakov, Vaganov, were waiting. Medvedev claimed that he was outside at the time of the execution as his guilty conscience shamed his tongue into lying.

The Jew Yurovsky then pulled out his revolver and pointed it directly at the Tsar’s head and fired. Tzar Nicholas II died instantly. Next, he shot Tzarina Alexandra as she made the sign of the Cross. Olga, Tatiana, Maria, and Anastasia, were shot next. Demidova, the maid, survived the first volley, so the Jewish Cheka assassins decided to bayonet her 30 times.

As the room became silent there was a low groan. Alexei was still in the arms of the Tsar and alive. The Jew Yurovsky stepped up and fired two shots into the boy’s ear. All the members of the Tsar’s family were lying on the floor with many wounds in their bodies. The blood was running in streams.

THE JEWISH COVER UP

As Robert Wilton, a correspondent in Moscow of the Times of London from 1902 through 1919, wrote in his book, The Last Days Of The Romanovs, the Jewish Board of Deputies and the Anglo-Jewish Association in Britain published an interview with Starynkevich, a Jewish lawyer, who was then Minister of Justice in the Urals region.

Starynkevich had appointed another Jew, Nikolai Sokolov, to assist in carrying out an investigation of the murders. The Jew lawyer, Starynkevich, lied, saying that his team of investigators (all Jews) had found no trace of any Jewish involvement in the killings.

This was a brazen falsehood and no support was proffered to support his claims. His lie was evidently intended to give Jewish organizations abroad a means of confusing and obscuring the whole issue.

But as Jesus Christ Himself said: “There is nothing covered that shall not be revealed,” the truth about this Jewish crime of all crimes is now being shouted from the rooftops.

The Jews, every single one of them, are culpable of “collective guilt.” They all better repent before the judgment of the Lord Jesus Christ falls upon their wicked heads!