Jewish Murderers Of The Russian Revolution 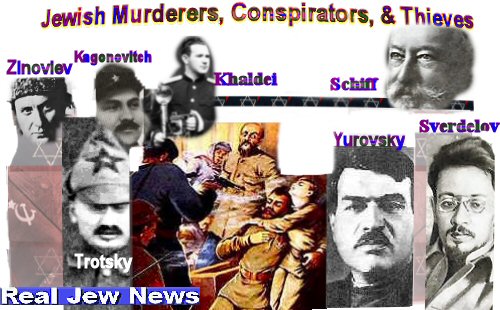 
The first was the English Revolution in 1649 which was financed by Jews from Holland, in which Cromell committed regicide. As the Jewish financiers dictated, Cromwell opened the doors for the return of the ousted Jews to England in 1656.

Building from this, World Jewry initiated, financed, and agitated the French Revolution beginning in 1788, resulting again in regicide and the Jewish subverting of the established Christian order. And Jews profited once again, for in 1789, all civil disabilities against the Jews in France were lifted and the Great Emancipation of the Jews took place.

The third Revolution was the Bolshevik uprising in Russia, of which this treatise focuses. The Bolshevik Revolution was financed by Jewish bankers, led by Jacob H Schiff of the Jewish Banking house, Kuhn, Loeb Co. Jews gained prominent roles in the Soviet government, and for the 3rd time, regicide of a Christian ruler was perpetrated by the Jews.

Dr. Fahey, in his authenticated work, The Rulers Of Russia quotes an American missionary stationed in St Petersburg from 1907 to 1918: “In October 1918, out of 388 members of the revolutionary government only 16 happened to be real Russians. All the rest were Jews with the exception of one negro. Many of these Jews came from the Lower East Side of New York.”

The fourth Revolution was the Spanish Civil War of 1936, financed by Bolshevik Jewry, but successfully opposed by Franco and Germany.

A FIFTH REVOLUTION on an International scale is now at work and headquartered in America. This is the Zionist agenda to create a New World Order whose oligarchs are Jews with names that include: Richard Perle, Paul Wolfowitz, and William Kristol, the Zionist neocon advisors to the Jewish-bought President George Bush.

The Israel Lobby known as AIPAC is the organizational apparatus of the 5th Revolution now in the making.

IN THE DARK NIGHT OF JULY 16 1918, Tzar Nicholas II and his pious Christian family were shot and bayoneted in cold blood by these Cheka Jews:

a) Leon Bronstein (Trotsky), Commander of the Soviet Red Army.

A PROMINENT JEWISH JOURNALIST now admits that in 1934, 38% of those holding high office in Stalin’s murderous regime were Jews:

1. Lazar Moiseyevich Kaganovich: Millions of Orthodox Christians were murdered by order of Kaganovich. He orderered the destruction of hundreds of Christian churches including Christ The Saviour Cathedral in Moscow.

In 1991, after living the life of a prince, Kaganovich committed suicide in fear of the “open society,” that is, “glasnot” which would have exposed his murderous deeds.

2. Ilya Ehrenburg: Minister of Soviet Propaganda for Stalin. He wrote, “The Germans are not human beings. Nothing gives us greater joy than corpses of Germans.”

3. Yevgeny Khaldei: Red Army photographer. Born in the Ukraine of Jewish parents. He staged the raising of the Hammer & Sickle Flag in the German Reichstag in Berlin in 1945, the emblem of the slaughter of millions of peasants and Christians, describing it as “the Russian national symbol of justice, triumph, and revenge.” 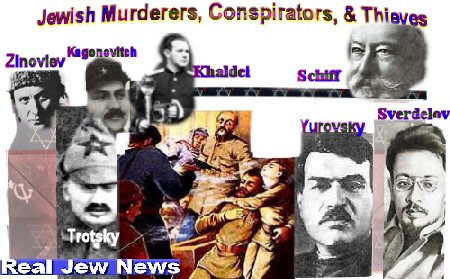 RUSSIAN PRESIDENT Vladimir Putin, contrary to White Supremacist David Duke’s assertions that he is promoting a white-society, is rather promoting the re-emergence of the historic religion and culture of Russia, namely, Russian Orthodox Christianity.

In a recent statement to Russian Orthodox Christians in America, Putin said, “You now have a believer at the head of Russia’s government.”

Putin has put his money where his mouth is by refusing the request of Russian Jewish scientists to discontinue Russian Christian Orthodoxy 101 in public schools. AndThe International Gay Rights Movement packed its bags in retreat whenÂ Putin consistently banned their Gay Parades in the streets of Moscow ever since his reign began in 2000.

ON NOVEMBER 5 2007, a rally was staged in Moscow celebrating Russian Unity Day. Slogans against Jews were shouted out including, “Death To The Jews!” World Jewry is now criticizing Putin for both allowing the rally and not repudiating it.
See Jerusalem Post’s Russia Slow To Act Against Anti Semitism

Bottom Line: The clock is now ticking before a huge backlash against the Jews occurs both here in America and abroad. Whenever Jews arrogate to themselves overwhelming power, history has taught us that a reaction by the host nations eventually takes place. In order for the Jews to prevent a conflagration, they must place the host nation’s interests before their own Zionist agenda.

As a Street Evangelist, I am proposing another solution, which I call the Christian final solution. Jews must renounce their racist religion of Judaism, a “reactionary” religion, and become Christians.

Some say that many Jews are not part of the Zionist agenda but are simply rank and file Jewish citizens. But I say that corporate guilt is in place, that is, apart from a renunciation of the Jewish agenda, all Jews are culpable. I for one, and many like me, repudiated Judaism and became an Orthodox Christian. If I, a former Jew embraced Jesus Christ, why can’t they?