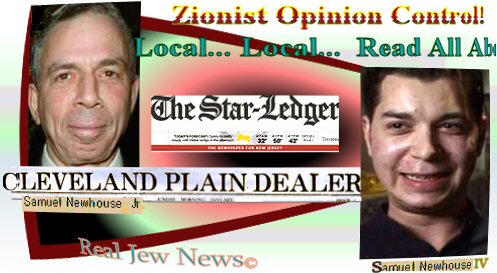 One might think that because of the large number of local newspapers across America a safeguard against Jewish control would be in place. However most “local newspapers” are owned by companies controlled by Jews whose offices are hundreds of miles away.

The Newhouse Empire of the Jewish brothers Samuel, Donald, & Theodore Neuhaus (surname changed to Newhouse) illustrates the insatiable appetite that Zionists have for opinion control.

Today the Newhouse Empire, under the parent corporation of Advance Publications, (owned by descendents of Samuel & Donald Newhouse), owns 40 “local newspapers” across the USA.

These include the Newark Star Ledger, the Cleveland Plain Dealer, & the Portland Oregonian.

2003: Forbes magazine estimates the worth of the Newhouse family at $15 billion.

I Recommend That Zionist Jews
Stop Controlling Our Opinions Through The Media!