Sources: Iron Curtain Over America, John Beatty;
What Price Israel?, Alfred Lilienthal
HARRY TRUMAN IS REVERED BY JEWS for his immediate recognition of the State of Israel on May 14 1948 only 11 minutes after David Ben-Gurion’s Declaration of Independence in Tel Aviv.

Even six days prior to this, Truman had met with the de facto Prime Minister, David Ben Gurion, who presented Truman with a Jewish Menorah for his recognition.

In his book, “Jewish Religion - Jewish History,” Israel Shahak records that Harry Truman had been abandoned by everyone when he came to run for President. Then an American Zionist brought Truman $2 million dollars in cash in a suitcase aboard his whistle-stop campaign train.

“That’s why our recognition of Israel was rushed through so fast,” John F Kennedy had remarked to Gore Vidal. And thus occurred yet another Zionist event in the corruption of American politicians. 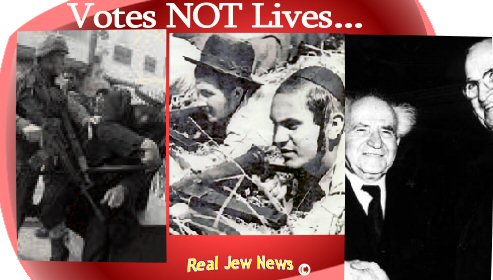 TRUMAN’S SUPPORT OF A BRUTAL ISRAEL

The “Israel” that Truman “recognized” was a Soviet-supplied “military entity” that in May of 1948 seized Arab citrus & olive groves throughout the fertile northwestern coast of Palestine.

Following this was a series of bombings of: 1) The British Officers Club in Jerusalem; 2) The Acre Prison; 3) The Semiramis Hotel. The climax of all of this Zionist brutality was the assassination of the UN Mediator for Palestine, Count Folke Bernadotte.

— “We need to support the people of Israel who have created a state with the best traditions and the highest standards of Western civilization.” — (New York Times of October 29 1948, Warren Moscow)

One wonders how Truman squared the “best traditions” and “highest standards of Western Civilization” with Israel’s thievery, brutality, and assassination squads…

TRUMAN WAS TOLD by his White House aide Clark Clifford that he would lose his 1948 election bid for his 2nd term in office unless he immediately recognized the Jewish state upon their declaration of Statehood. Already in 1945 in a meeting with Middle East American diplomats who pleaded with Truman not to heed Zionist urgings, Truman said:

Abraham Feinberg: This Zionist was Chairman of a New York hosiery manufacturer Kayser-Roth Corporation & of American Bank and Trust & Israel Bonds. Feinberg led many Democratic fund-raising drives. During Truman’s 1948 whistle stop campaign Feinberg arranged that Jewish donors gave of their largesse at each stop. Most likely it was Feinberg who gave the $2 million dollars in a suitcase to Truman on one of his stops.

Eddie Jacobson: This Zionist was from Kansas City Missouri who was once partners with Truman in the haberdashery business. Jacobson introduced the future President of Israel Chaim Weitzman to Truman in a “secret Zionist meeting” ($$$) on March 18 1948 two months before Truman’s recognition.


And: “Assassination Of President McKinley Was By Jews” Click Here