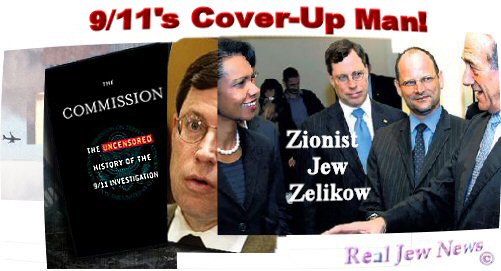 Sources: “Biography Of Philip Zelikow,” Source Watch Here; Rense News Here
“WHY WAS THE ZIONIST JEW Philip Zelikow appointed as Executive Director of the 9/11 Commission?” many are now asking.

Indeed, many are saying that Zelikow, with his close ties to Condoleezza Rice, Cheney, & President George Bush, could not conduct an unbiased investigation as Director of the Commission.

In his new book, The Commission: The Uncensored History of the 9/11 Investigation, Philip Shenon wrote: “The appointment of Zelikow to head the inquiry into America’s response to the September 11 terrorist attacks was akin to putting the fox in charge of the hen house.”

The Family Steering Committee for the 9-11 Commission repeatedly called for Philip Zelikow’s resignation. The families, citing Zelikow’s close connections to the Bush Administration, were concerned that Zelikow’s appointment made a mockery of the idea that the Commission was “independent.” But the Zionist controlled Bush Administration ignored their complaint. 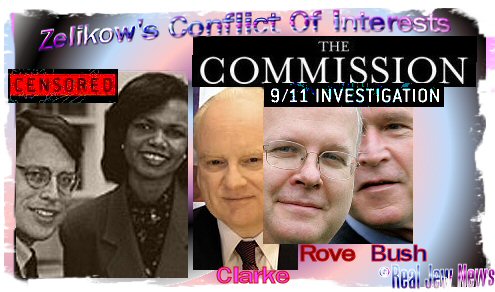 ZELIKOW’S CONFLICT OF INTERESTS
Here Is A Chronology Of Zelikow’s Ties To The Bush Administration:

1996-98: Zelikow & Rice are together again when Zelikow is Director of the Aspen Strategy Group, a Zionist foreign-policy strategy “think tank.” Rice, along with Dick Cheney & Paul Wolfowitz, are also members.

2000: Zelikow & Rice are reunited when Bush names Zelikow to his transition team for the National Security Council.

2001: Zelikow is appointed by Bush to the President’s Foreign Intelligence Advisory Board.

2003: Zelikow is appointed Executive Director of the 9/11 Commission. Thus it is no different than if Rice or Cheney had been running the Commission.

2004: Zelikow skews the investigation by deciding which topics would be investigated and which ones not. Bush’s comic book line for the motive behind 9/11 is taken by Zelikow: “Al Qaida hates our freedom.”

2004: Zelikow is secretly in contact with President Bush’s close adviser Karl Rove while the “independent” Commission is completing its report finalized on July 22 2004.


And: “The War On Terror Is A Jewish Hoax!” Click Here