The Judaic Destruction Of Western Culture 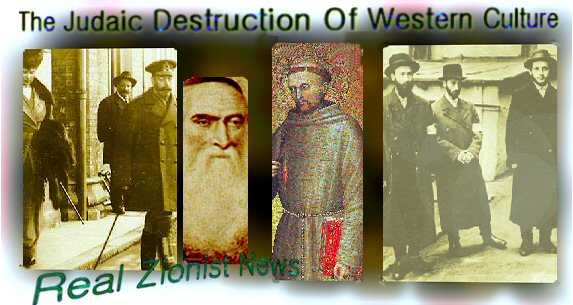 THE JUDAIC DESTRUCTION
OF WESTERN CULTURE

IN THE CULTURE of which the Jew has emerged as a dominant power, nations were a unit of belief entirely independent of the notion of territory, of Fatherland.

There was no place in this world of Christian belief with its monarchy, its piety, and agrarian economy for the uprooted stranger with his Talmud, his money and cynicism, his dualistic ethics, one for his own kind, another for the goyim.

Between the members of the Western Culture and the Jew who lived in and on the body of the West, (but in no way contributed to its development apart from the aggrandizing of “Yiddish Studies” in the West’s once Christian universities), there arose a mutual hatred.

The Jew huddled in his ghetto as a symbol of his inner isolation from European Christian environment and culture. The general sentiment of the religious Christian Age up to the French Revolution was that the Jew was a “Christ-Killer” and not to be trusted.

There was no inner connection between the Jew and his Western surroundings. But with the coming of ‘democracy’ created by Jewish infiltration of the Free Masons which was made into an instrument of his revenge-politics, a great wave of excitement ran through the Jewish world.

With Napoleon granting Jewry full civil rights, the Jew forged steadily ahead in finance, in trade, in diplomacy, in education, in letters, in politics, in the press — remaining a closed organism inside an open one, a state within a state.

While Westerners applied the test of ability, the Jew chose his associates and subordinates on the basis of their membership and allegiance to his Culture-State-Nation-Race, or in one of his secret societies which extended horizontally throughout Europe.

By the 19th century, the Jew was able to direct the power of Western States into his channels. Within each country, he sought to impose policies which would give the Jew complete mastery over Western Civilization.

Fearing for its life as a Christian nation, the Russian Tsars struggled against Judaic revolutionary forces. In France, the landed class longed for the return of the monarchy.

And in Germany, the masses supported the overturning of the Jewish-empowered Weimar Republic only to be humiliated by a lost war and an ever persistent Judaic-condemnation of their race.

ALL ASPECTS OF SOCIAL DECAY have been permeated by the Judaic culture-destroyer, who well realizes their value in his programme for ascendancy.

The degradation of Western-Christian social life did not merely happen, it was planned, deliberately fostered and spread, as outlined by The Protocols of the Learned Elders of Zion. This systematic undermining of the culture of the West continues today.

The instruments of this assault on Christian culture and consciousness are the weapons of propaganda: the press, television, cinema, and education.

The chief fount of the propaganda is the cinema. From his capital in Hollywood, the Jew spews out an endless series of perverted films to debase and degenerate the youth of America and the Western world.

Through movies which preach a message of destruction of normal familial and sexual life — exalting the alienated hero in pursuit of hedonistic pleasure — belittling patriotism and national identity — the Jew has succeeded in fragmenting members of society into a heap of disparate grains of sand, bereft of meaning and without permanence.

Not only are individuals the victims of the Jew, but the family and the White race itself is dissolved wherever his propaganda touches.

Promoting the erotic-as-its-own-end, Jewish Hollywood deliberately undermines the propagation of the White race, scorns its history, and crushes its destiny.

The disintegrated victims shorn of their organic and historic connections with the great super-personal content of Life, become unfruitful, lose both their will to power and their will to propagate.

Following in this wake of Judaic wreckage, the White Christian victims lack the ability to believe in or to follow anything noble and future-reaching.

The Jew has attained his goal in destroying Western culture while at the same time he remains embodied in an organism immune from his destructive programme.

Could another “organism” with its own self-preserving aims and boundaries surface to oppose Judaic rule?

Militarism is emerging as a potent political and economic force in the West. Could the military be the Western world’s last hope in overturning the power of the Jew?…

And: Judeo Masonry & The Ruin Of Europe Click Here