Judeo Masonry & The Ruin Of Europe 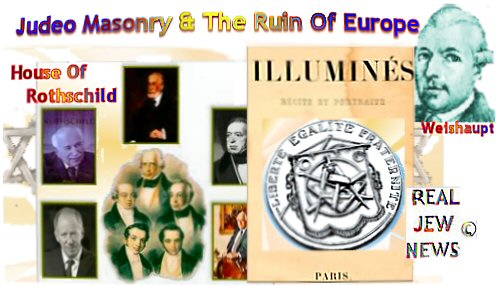 ——-
JUDEO MASONRY BEGAN IN EUROPE with the rise to power of the House of Rothschild:

1776: The Jew, Adam Weishaupt, who “converted” to Roman Catholicism but soon renounced it, forms the Illuminati in the Lodge of Theodore in Munich Germany.

~ Because of Weishaupt’s numerous contacts throughout Europe of high-positioned functionaries, Meyer Amschel Rothschild (1744-1812), befriends and funds the Jew, Adam Weishaupt.

1796: Meyer Amschel Rothschild hires Sigmund Geisenheimer as his clerk in his Frankfurt office. Geisenheimer, who had wide-ranging Masonic contacts that criss-crossed Europe, was a member of the French Grand Orient Lodge of Freemasons called L’Aurore Naissante Lodge.

1800: With the help of Daniel Itzig, Court Jew to Frederick William II, and the wealthy Jewish merchant, Isaac Hildesheim, who changed his name to Justus Hiller, Sigmund Geisenheimer founds the Judenloge in Frankfurt.

~ Soon other influential Jews join the Judenloge such as Michael Hess, later to become the Principal of the Reformed Jewish School known as, Philanthropin, & Dr Karl Ludwig Baruch, a literary historian, who changed his surname to Borne.

1803: Solomon Rothschild decides to expand his contacts by joining the French L’Aurore Lodge that had adopted Weishaupt’s Illuminati ideology.

1816: Johann Christian Ehrmann, a former Frankfurt Mason, warns the German people in his pamphlet, Das Judenthum in der Maurerey, (The Jews in Masonry), that the Frankfurt Jewish Masons wanted a world republic based on humanism.

THE FRENCH REVOLUTION OF 1789 came about under the influence of Judeo Masonry and the subversive society behind it known as the Illuminati. This is now an established fact.

Seeing that the Jews obtained emancipation in France only 2 years after the Revolution and that the new Social Order imposed by the Revolution summed up in the catch-cry “Liberty, Equality, Fraternity,” (an impossible and contradictory ideology), was based upon Jewish Anti-Christian principles unheard of in Christian Europe, it is necessary to see what relationship the wealthy Jews of the time had with regard to the outbreak.

Thus the Jewish financiers behind the 1789 French Revolution are as follows:

Moses Mocatta(1768-1857): London, partner of the Goldsmids and uncle of Sir Moses Montefiore.

These Jews & All Of Their Jewish Compatriots Are Guilty Of The Righteous Blood
Of The Holy Monarchs Of France, King Louis XVI & Queen Marie Antoinette! 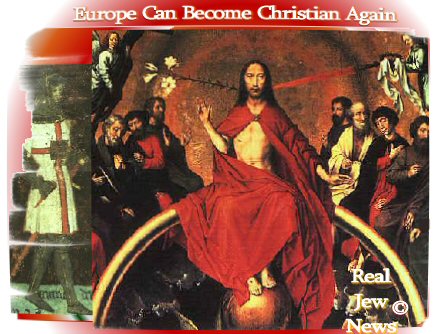 THE DEMISE OF CHRISTIAN EUROPE BY JUDEO MASONRY

THANKS TO JUDEO MASONRY and its promulgation of Anti-Christian humanism, the demise of Christian Europe is now almost complete.

In his 1885 Immortale Dei on the Christian Constitution of States, Pope Leo XIII issued this warning:

— “Christianity had subdued the barbarous nations of Europe: the Angles, Saxons, Jutes, Celts, Franks, and Teutons, changing them from a savage to a civilized condition.

Christian Europe victoriously rolled back the tide of Mohammedan conquest, standing forth as the teacher of all in every branch of national culture and bestowed on the world the gift of true liberty.

There was once a time when States were governed by the Gospel of Jesus Christ. Then it was that the power of Christian wisdom had diffused itself throughout the institutions, laws, and morals of the people.

But the authority of God is now passed over in silence as if He cared nothing for human society; or as if men, whether in their individual capacity or bound together in social relations, owed nothing to God; or as if there could be a government of which the whole origin and power and authority did not reside in God Himself.” — Here

We Can Again Become A Christian Society Both In Europe & America
If We Convert & Stop The Jews NOW!