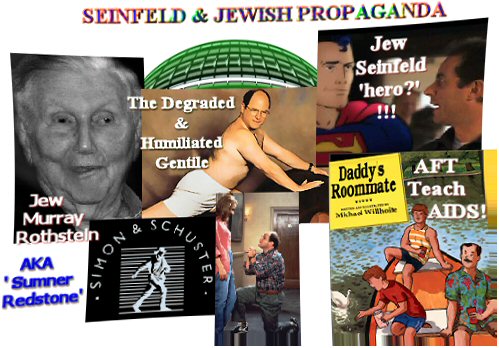 Or Send Your Contribution To:
Brother Nathanael Kapner; PO Box 547; Priest River ID 83856
E-mail: bronathanael@yahoo.com
JEWS KNOW HOW to manipulate minds. They’ve been at it ever since the French Revolution.


And they know how to censor historical facts and observations that shed light on their manipulative ways. The Jews also know how to create an Anti Christian world consensus through the media of which they have full world-wide control.

Seven million Jews live in America. This is 2% of the U.S population. Yet this small percentage of Jews is controlling the minds of the remaining 98% rest of us. How is this possible? It’s because the Jews control: 1) Newspapers 2) Education 3) Publishing 4) Hollywood & Television.

“Jews, Jews, everywhere,” is a slogan one is hearing more and more lately. In every realm of propagandizing influence, Jews are in control:

Is it any wonder then that the slogan “Jews, Jews, Everywhere” is so popular these days? 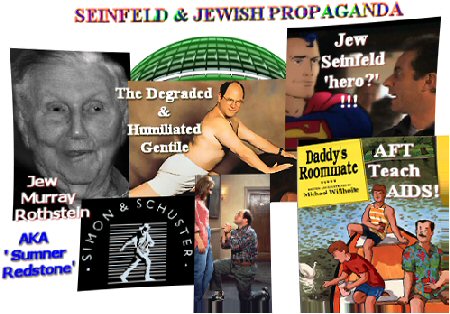 THE AIM OF JEWISH PROPAGANDA

JEWS ARE HELL BENT on destroying “Christian” society. They must do this to secure their earth-bound survival.

For a Christian society, as was the case in the glorious years of Czarist Russia and the Byzantine Empire, forbad the Jews from having any role in banking, education, publishing, and politics.

This is why the Jews have censored all publishing and educational efforts to highlight the positive elements of Czarsist Russia and the 14-Centuries-long Byzantine Empire. What college graduate knows that the Byzantine Empire even existed?

Here is what the Jews are doing to destroy a Christian society through their Propaganda:

1. Undermining The Christian World View Of Creation: Jews promote the theory that man is an evolved ape. But the Jews don’t believe this about themselves.

The Jews believe that they are ‘God’s chosen people.’ The Gentiles though, the Jews regard as the evolved apes. But a Gentile can lift himself out of the monkey-kingdom by promoting Zionism. Then he becomes a “righteous Gentile.”

Indeed - the rabbis believe that the “goys” are sub-human. The Talmud teaches this. Secular Jews subconsciously buy into this. This is because the teaching of the Talmud, *not* the Bible, shapes the thinking of every Jew:

——- “All Gentile children are animals.” Talmud, Yebamoth 98a; Gentile girls are in a state of filth from birth.” Talmud, Abodah Zarah 36b; “Gentiles are compared to donkeys as servants to masters.” Talmud, Ketubah 3a. ——-

Jews do not tell the little children in elementary schools that when a man inserts his penis into the anus of another man that this results in these perverted partners contacting a deadly disease known as AIDS.

3. Undermining The Christian World View Of Marriage: Jews promote the idea that a woman is better off in the working-world rather than marrying and staying at home raising children.

The reason why Jews push feminism is to degrade and weaken the dominant Gentile males. The Jews want the Gentile females to have political and social power because this creates conditions which make it easier for Jewish domination now that the Gentile male has been pre-empted.

The Gentile women who have bought into this Jewish idea have missed the oppurtunity to fulfill their God given function of propagation and influencing the race of man. All great men have thanked their mothers for their tremendous influence in their lives.

4. Undermining The Christian World View Of Youth Growing Into Manhood: Jews promote through the media the restless, alienated young adult, disenfranchised from meaning and purpose.

This is why our youth have found recourse for the meaninglessness promoted by the Jews of Hollywood & TV in drugs and escapist entertainment like Jewish-produced video games and pornography.

^^^^ An example of Jewish TV propaganda is illustrated by the Jew-actor Jerry Seinfeld.


In his Jewish-produced show, Seinfeld, he the hero of the production, is the clever and witty leader of the stupid, neurotic, Gentile George Costanza.

The Jew-actor Seinfeld, who is George’s guide, instructs the brainless Gentile neurotic to have “quickie sessions” with Elaine as good “therapy.” Thus the Jew Seinfeld takes on the role of ‘psychiatrist” who divines both the cause and cure for Gentile ‘neurosis.’

But the real neurotics are Jews like Gerald Seinfeld who have been relegated by the words of the Hebrew prophets to be wanderers amongst the nations for their rejection and crucifixtion of Jesus Christ the Messiah of Israel.

HOW CAN WE STOP THE JEWISH PROPAGANDA MACHINE BEFORE IT’S TOO LATE?

1. All those concerned must commit their lives to Jesus Christ and begin asserting Christianity in our now Jewified society. There is nothing the Jew fears more than a Christian society. (Click Here: Why The Jews Hate Jesus Christ)

2. All those concerned must begin speaking out in every possible venue against the Jews and their Anti Christian propaganda.

3. All those concerned must protest to schools, teachers, publishing houses, and stores that promote all of the Jewish homosexul & lesbian filth that our children have been bombarded with.

We still have a chance to make our nation a Christian America, (not a Jewish America), once again!