In the piece, Krauthammer defends the Israeli raid on the humanitarian Gaza-bound flotilla. What is your assessment of this article?

Kevin MacDonald PhD: First, let’s look at Krauthammer’s underlying premise. For this is what forms the basis for how he and global Jewry defend Israeli crimes.

It must also be understood that Krauthammer argues as a Jew, not as an American, seeking primarily the advancement of Jewish interests.

Kevin MacDonald: Krauthammer’s fundamental premise is outlined in his book, “Democratic Realism: An American Foreign Policy For a Unipolar World.”

Krauthammer insists that America must seize the opportunity created by the fall of the Soviet Union to remake the entire Arab world in the interests of “democratic globalism.”

Br Nathanael: So he begins his rant by first appealing to “democratic” themes?

Kevin MacDonald: Yes. “America,” says Krauthammer, “is a country with no biological identity” and should go to war to promote “democracy” and defend “democratic” nations such as Israel.

Ironically, he’s probably had to rethink his rationale for war against the Arab world since Hamas won the largest number of votes and parliamentary seats in democratic elections held in 2006.

Br Nathanael: What does Krauthammer mean when he advances the idea that America has no biological identity?

A prime component of Jewish propaganda is to assault any form of ethno-nationalism that is not specifically Jewish. Herein lies their hypocrisy. A “Jewish state” in Israel is fine. But any form of “White identity” in America is labeled “racist.”

Br Nathanael: How does Krauthammer move from an assault on white ethnicity to manipulating America to wage war for the sake of democracy?

Kevin MacDonald: By pitching eternal war for democracy as a kind of ‘religious’ crusade for America — an America “not committed to blood, but to principles” — Krauthammer confers an ideological mission upon America.

Fighting for democracy and freedom is America’s cause, argues Krauthammer, not bolstering a national identity. Given current demographics, that national identity would be a White Christian one, which Jewry fears and abhors — and does all it can to destroy.

Herein lies the Jewish sleight of hand that serves to strengthen Jewish ethnic interests at the expense of American interests, all in the name of championing democracy.

This is how Krauthammer argues as an Israel-Firster. And Jews, like Krauthammer, have the upper hand in how our foreign policy is shaped. It’s part of the sickness we face.

Br Nathanael: How does Krauthammer’s crusade for freedom and democracy apply to the flotilla incident?

He knows Americans are suckers for arguments framed as moral imperatives. Thus, he casts the Israelis as the good guys and the Arabs as the bad guys in the flotilla raid.

Br Nathanael: How does he pull this off given the murders of civilians by the Israelis?

Kevin MacDonald: While the rest of the world is horrified at the behavior of the Israeli military, Krauthammer presents Israel as the “hapless victim,” condemned for simply “defending” itself.

Krauthammer cunningly brings his readers into an alternate universe where aggressors are victims and “defense” means wanton murder of civilians. That’s how he pulls it off. 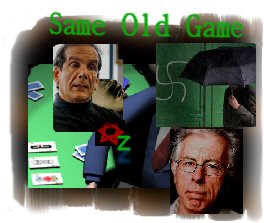 Br Nathanael: But where is “moral posturing” here?

Kevin MacDonald: That’s the secret of Jewish subterfuge when arguing for an unjustifiable case. Krauthammer relies on the anti-Semitism card — combined with the usual trademarked dose of moral posturing.

Krauthammer’s column on the flotilla titled “Those Troublesome Jews” is a perfect example of this method. Why are the Jews “troublesome?” — because Jews insist on defending themselves.

Israel’s and all of Jewry’s problems, says Krauthammer, stems from the fact that the entire world wants another Holocaust, including the Europeans, “with a history of centuries of savage persecution of Jews in their Christian lands.”

While the rest of the world hates Jews because of Islamic totalitarianism, argues Krauthammer, the Europeans hate Jews because they’re all basically Nazis at heart.

Thus, in Krauthammer’s view, the world must bow before Israel with a guilty conscience. For to censure Israel and therefore all of Jewry, is to engage in “savage anti-Semitism.” So far, this tactic has worked.

Br Nathanael: Why does this tactic work?

Kevin MacDonald: It works because we are continually subjected to pro-Israel chauvinism and towering Jewish ethnocentrism in the most prestigious and popular media outlets.

Americans internalize and accept unconsciously the double standard by which the Jewish-owned media rationalizes Israeli racialism but promotes the idea that America exists to defend abstractions like “freedom” and “democracy.” Any signs of White identity and sense of White interests are presented by the Jews as morally repugnant.

Americans have come to take these ‘Jewish’ ideas for granted — to the point that Jewish apologists, like Krauthammer, are eminently respectable, especially among conservatives. Commentators, like Sean Hannity and Rush Limbaugh, seem to have internalized this mindset as well.

The tea-partiers have also bought into this Jewish fraud. Israeli racialism is good, American racialism is evil. It’s part of the sickness we face.

And: Who Really Owns The Media In 2010 Click Here