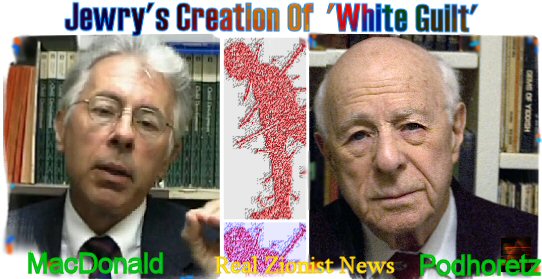 DR KEVIN MACDONALD, AUTHOR, PSYCHOLOGIST AND HISTORIAN, is a Professor of Psychology at the California State University in Long Beach California.

Kevin MacDonald is a co-founder and participating journalist of the The Occidental Observer and The Occidental Quarterly, both dedicated to the preservation of the Euro-American white race, of which, international Jewry is attempting to destroy.

As the author of several books, Kevin MacDonald outlines Jewry’s quest to destroy White Christian culture through intellectual movements, politics, and the mass media. His masterwork, The Culture Of Critique, can be ordered Here. (Read The Review, Here.)

Brother Nathanael Kapner: The Anti Defamation League (ADL) recently attacked you as “an anti-Semitic professor” who couches his views as “legitimate intellectual inquiry.”

They state that you argue that “Jews are a hostile elite in American society who undermine the country’s European heritage and traditions in an effort to destroy Europeans.” How do you respond to this?

Kevin MacDonald, PhD: My lode is as follows: I see conflicts of interest between ethnic groups as part of the natural world.

The only difference between conflicts between Jews and non-Jews compared to garden variety ethnic conflict stems from the fact that for over a century, Jews have formed an elite in various European and European-derived societies with a peculiar profile: deeply ethnocentric; adept at ethnic networking; wealthy and intelligent; aggressive in pursuit of their interests; prone to media ownership and the production of culture; and hostile to the traditional peoples and cultures of the societies in which they form an elite.

Br Nathanael: The ADL contends that your research provides “intellectual legitimacy to anti-Semitism.” What is your response?

Kevin MacDonald: Because Jews have wielded immense power as an elite that is vastly disproportionate to their numbers, anti-Jewish attitudes and behavior are to be expected when Jewish power conflicts with the interests of others. 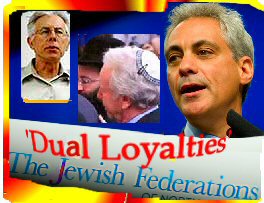 To be more specific, the various themes of modern anti-Semitism all boil down to the Jewish role as a hostile elite whose attitudes and behavior are both self-serving and detrimental to the interests of the indigenous peoples with whom they reside.

This is evidenced by Jewry’s economic domination in many parts of Europe prior to World War II; cultural subversion via the Jewish role in the media and intellectual life (e.g. removing Christian symbols from public places); facilitating the displacement of native populations via mass migration into Western societies; dual loyalty because of Jewish sympathies with foreign Jews, especially Israel since 1948; and the history of Jews as a hostile elite in the USSR during the period when it became the most murderous regime in European history.

Since I believe that these propositions are intellectually defensible, and since these propositions, if believed by non-Jews, would cause them to attempt to lessen Jewish power and thereby further their own interests, it is indeed the case that my work could be said to provide intellectual legitimacy to anti-Jewish attitudes and behavior. 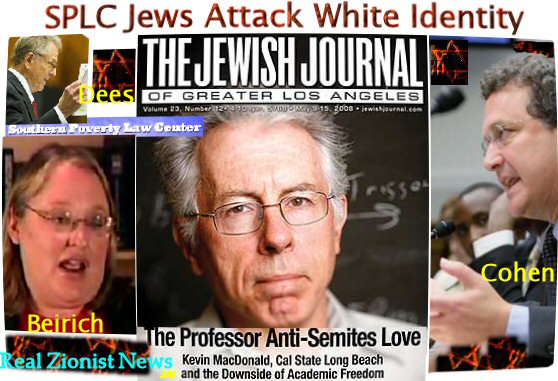 Br Nathanael: The Jewish front group, the Southern Poverty Law Center (SPLC), which is heavily Jewish-funded, (including funding from George Soros’ Open Society), joined with the ADL in attacking you. Calling you America’s “scariest academic,” did they not try to get you fired from California State University in the spring of 2008?

Kevin MacDonald: The SPLC did want me fired, but there was no way the university could do that because I have tenure. They just made my life miserable and rallied the other faculty against me through countless meetings and statements. The LA Jewish Journal jumped on the ’stir’ in their cover story, “The Professor Anti Semites Love,” which highlighted the SPLC’s accusations against me. It has calmed down a bit, though there are still some faculty members who do everything they can to make life unpleasant for me.

Br Nathanael: It appears from your most recent writings, such as your essay exposing Jewry’s activities against white Americans, “The Utter Normality Of Ethnonationalism—Except For Whites,” that you have moved from being a dispassionate observer to an overt critic of Jewish collective behavior. Why the change?

Kevin MacDonald: As I noted, segments of the Jewish community have interests and behavior that conflict with my interests, of which, I am active in promoting. 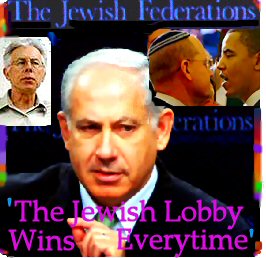 For example, I firmly believe that Jewish neo-conservatives whose primary allegiance is to Israel have had a decisive influence on recent American foreign policy. Currently, even though Obama has pressed Israel to put a freeze on settlement expansion, the Jewish lobby has won out as agents for the Israeli government’s expansion in the occupied areas. Thus, I am actively engaged in an attempt to alter the intellectual and political climate in this country so that these sorts of things do not continue.

Being able to discuss the Jewish motivation as the main mover of our current foreign policy is, in my opinion, an important aspect of being able to change this policy to conform to what I think are in the interests of the great majority of Americans, including myself.

What I am doing is no different from the legions of Jewish academics who, as an aspect of their professional and personal identity, have vigorously pursued their ethnic interests by writing for mainstream publications, by promoting Zionist causes, and by attempting to change the intellectual and political climate of the U.S. in a way that furthers their perceived ethnic interests.

Their presence at elite universities and their access to prestigious publication venues, is an important basis of their influence. I am simply expressing, and with as much vigour, my own interests and those of numerous others.

Br Nathanael: In one of your essays from your book, Cultural Insurrections, Psychology And White Ethnocentrism, you alternate between the phrases, “implicit whiteness” and “white guilt.” Is there a connection between the two?

Kevin MacDonald: We must go back to what I mentioned earlier of how Jews in academia and in the media are prone to construction of culture. Herein lies the fundamental issues surrounding white ethnocentrism, and specifically, “implicit whiteness” and “white guilt.”

In a broader context, it has been the Jewish intellectual movements of the 20th Century that have effected a significant decline in the cultural influence of white Americans. These Jewish movements have infused into American life a culture of critique which assaults Western culture as being something deficient, something suspect, something replete with moral turpitude.

A prime component of the Jewish movements’ attack on white identity has been the pathologization of Gentile allegiances. In the Jewish-created culture of critique which now exists in America, these Gentile allegiances are looked upon as “racist,” and for all practical purposes, that is, Jewish purposes, “taboo.”

The leaders of these movements, such as Franz Boas in the field of anthropology and Sigmund Freud in the field of psychoanalysis, who identified themselves as Jews, have subjected white Christian culture to radical criticism while at the same time have Judaized that culture to the detriment, indeed, even to the fear, of white identification.

Br Nathanael: How then does “implicit whiteness” and “white guilt” come into play? 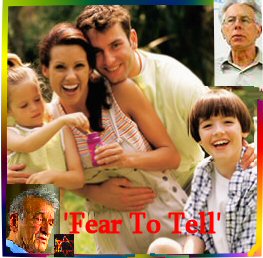 Kevin MacDonald: Despite the current cultural programming, white people are coalescing into what I term “implicit white communities” in multicultural America — communities that reﬂect their ethnocentrism but that “cannot tell their name.”

Why can’t they “tell their name?” They cannot explicitly state that their choice of neighborhoods derives from racial preference because that conﬂicts with the official racial ideology of the wider culture. Hence, the psychological response of “guilt,” specifically, “white guilt,” comes into play.

“Political correctness,” which now determines behavioral innocence or guilt, has been infixed into America’s collective consciousness by the powerful Jewish forces in the academic and media worlds. The discussion of issues related to white identity and interests has been shaped, controlled, and submerged by these two Jewish-dominated centers of power.

Br Nathanael: Do you have a solution to this dilemma facing white Americans?

Kevin MacDonald: White Americans have a daunting challenge before them. White ﬂight, as part of the fragmented future that lies in store for our nation with high levels of non-European immigration, is insufficient for dealing with Jewry’s assault on our racial identity and allegiances. In attempting to ﬁnd a way out of this morass, changing the explicit culture is critical.


And: The Jewish Conspiracy Behind The 1965 Open Immigration Law Click Here