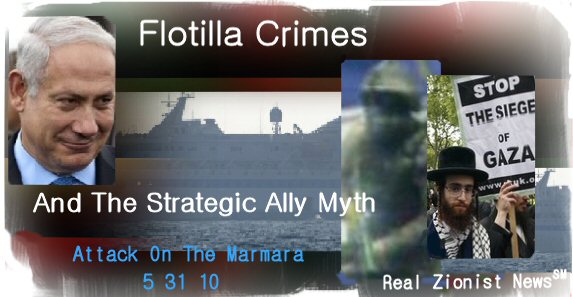 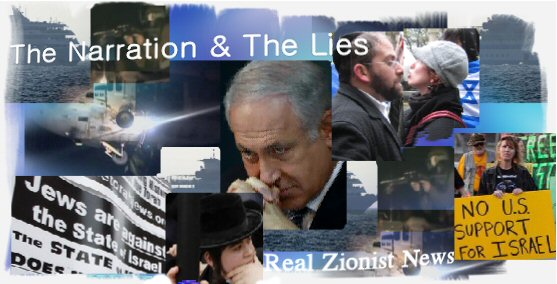 ISRAELI PROPAGANDA wishes to convince the world that the Marmara Freedom Flotilla bound for Gaza on a humanitarian mission was actually a “terrorist” operation.

“Our soldiers were mobbed, they were beaten, there was even a report of gunfire…the soldiers had to defend themselves,” Netanyahu told reporters on the morning of the Israeli attack, May 31, 2010.

But why was there no mention by Netanyahu that Israel was the aggressor and assaulted the ship in international waters, being legal grounds for charging Israel with war crimes?

And why is the Jewish-owned mass media suppressing all political dissent over the Israeli criminal attacks on unarmed civilians and inundating us instead with continual news ad infinitum on the BP oil spill “crisis?”

A civilian aid worker from Greece, named Michael Grigoropoulos, who was on the ship along with citizens from fifty countries, a Nobel Peace Prize winner, and a former US ambassador, gives a more reliable account than the lying Netanyahu:

“The Israelis rose suddenly and seized the ship. They kept us as hostages under degrading conditions with weapons turned on us.

The Israelis kept us as prisoners and used videos ordering us to undress. They even used electric shocks and rubber bullets on us. Our requests to have lawyers represent us were denied. It was endless physical abuse and psychological warfare.”

DISPLAYING TO THE WESTERN PRESS an array of photos showing Israeli soldiers being “attacked” with clubs, knives, and metallic “weapons” in BROAD DAYLIGHT, somehow does not square with the widespread reporting that the Israeli attack took place at 4 AM under the cover of deep darkness. And besides, everyone knows the Israelis are lying.

With 19 civilians killed (no Israeli casualties of course), with bloodied passengers sprawled on the deck and others diving into the sea to save themselves from the Israeli onslaught — and while hundreds of aid workers were towed from the international waters to Israeli detention camps — it is time to ask ourselves, “Is Israel truly a strategic ally of the US?”

But Chas W. Freeman, former Assistant Secretary of Defense, and Philip Giraldi, a recognized authority on international security, both say “No.”

CHALLENGING ZIONIST CLAIMS that American thirst for hegemony in the Mid East, and not the Israel lobby, is the prime motivator of US policy toward Israel, Chas Freeman presents convincing arguments against the Zionist position.

Describing the outworn strategic ally polemic as being “far from novel on any score,” Freeman then outlines a number of reasons why Israel is not a strategic ally of America:

-1- Israeli bases are not available for US use.

-2- The US has no bases or troop presence in Israel and stores only minimal military supplies in the country used at will by the IDF.

-3- None of Israel’s neighbors will facilitate overflight for military aircraft transiting over Israeli territory let alone taking off from there. Israel is useless for purposes of strategic logistics or power projection.

-4- Israel is worse than irrelevant to the defense of Middle Eastern energy supplies. The US relationship with Israel has jeopardized these supplies (as in 1973), rather than contributing to securing them.

-5- US relations with Israel do not bolster US prestige in Middle Eastern oil-producing countries or assist the US to “dominate” them, they complicate and weaken US influence. Instead, they have at times resulted in the suspension of US relations with such countries.

-6- Israel does not have the diplomatic prestige or capacity to marshal support for US interests or policies globally or in its own region and does not do so. On the contrary, Israel requires constant American defense against political condemnation and sanctions by the international community.

-7- Israel does not fund aid programs in third countries to complement and support US foreign or military policy as other allies and strategic partners do.

In his closing argument, Freeman asserts that Washington has made Israel its largest recipient of foreign aid, encourages private transfers to Israel through tax breaks, transfers huge quantities of weapons to it gratis, and allocates military R&D to Israeli rather than US institutions. View Entire Story Here. 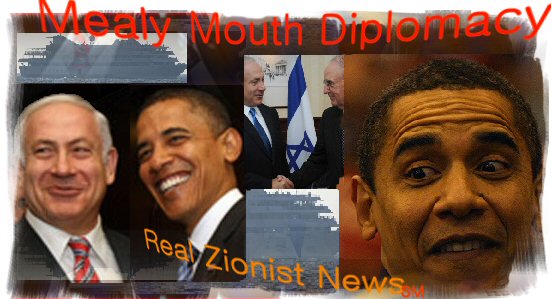 The question is, as Steven Walt, author of The Israel Lobby puts it: “Will Obama show some backbone on this issue and go beyond his usual mealy-mouthed statements when Israel acts foolishly and dangerously?”

Well, don’t hold your breath everybody. For Obama is owned lock, stock, Uzi, and shekel, by the Israel Lobby. And that’s what US diplomacy and US media coverage is all about — directed AND suppressed by Zionist interests AND funded by lots of Jewish money…

And: Gaza & The Psychology Of Zionist Jews Click Here

And: How The Jewish Lobby Nailed Freeman Click Here