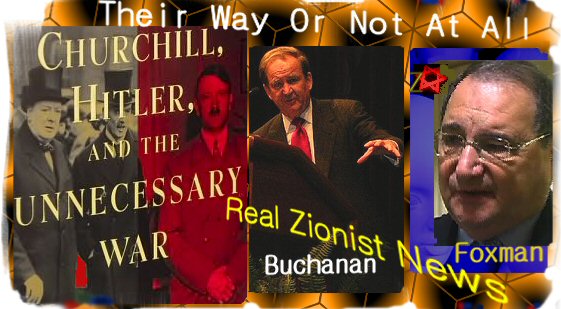 “DID HITLER WANT WAR?” asks the internationally renowned author and political analyst, Pat Buchanan, in his recent book, “Hitler And The Unnecessary War.”

Buchanan answers his own question with a definitive “No” — proving with documented facts that Hitler tried every possible means to avert war with Great Britain and her allies.

Although many reputable figures applaud Buchanan’s assessment of Hitler’s war policy by subtitling his latest literary effort: “Buchanan’s Necessary Book” - the Jews do not see it that way. The only “necessity” for them is to stuff a Jewish gag into the author’s honorable mouth.

No sooner was Buchanan’s book released in May 2008, than Abraham Foxman, Director of the Anti-Defamation League, slandered the highly touted author by calling him a “racist, a patron of white supremacists, a cesspool extremist, and an unrepentant bigot.” How exultant these Jews become when spewing out their venom against noble Gentiles! View Entire Story Here, Here & Here. 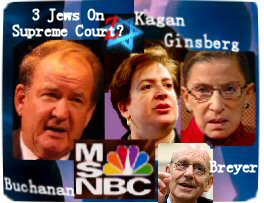 When Buchanan introduced the book on his FORMER MSNBC column, he wrote: “America went to war where the fighting would mostly be done by kids with names like McAllister, Murphy, and Leroy Brown.” Immediately, the National Jewish Democratic Council demanded that MSNBC remove the article contending that Buchanan “charged the Jews with starting a war they wouldn’t fight in.”

Did MSNBC stand up to the Jews? Of course not. Jews have TOO MUCH POWER in America for that to happen. Buchanan’s article is gone forever and so is his weekly column. Instead, we are left with a brave new world which revolves around Jewish interests and historical deceit.

Now MSNBC has turned against their former columnist by accusing Buchanan of “rampaging against the Jews” simply because he wrote, (on his own Website), that the nomination of Elena Kagan to the Supreme Court brings a “disproportionate 33% of Jews” to the nation’s highest judicial bench.

IN HIS FIRST MAJOR WORK after the collapse of the Soviet Union in 1991, Alexander Solzhenitsyn published his final masterwork, “Two Hundred Years Together.”

Solzhenitsyn’s subject is the history of Jews in Russia with an emphasis on Jewry’s role in the Bolshevik Revolution and the Soviet purges. Exposing Bolshevik Jewish leaders as perpetrators of the mass murders of over 60 million Russian Christians and the complicity of the Jewish community, Solzhenitsyn broke the last taboo on the history of Russia’s most painful period.

Was Solzhenitsyn’s book translated into English like the rest of his books? No. The Jews who own and control the major publishing houses of the West fear its contents. 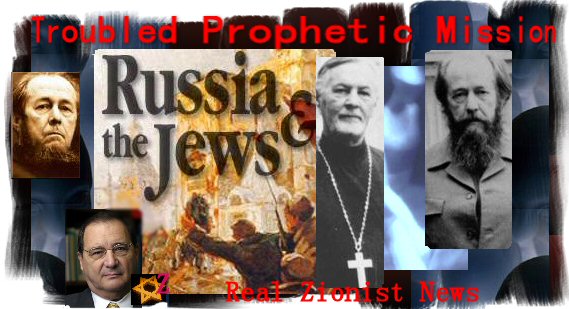 The inaugural review by the Moscow Times of Two Hundred Years Together put forth a warning to Solzhenitsyn: “Your book will be controversial, perhaps even censured by the Western world. Your final years will be looked upon as a troubled prophetic mission.”

That “mission” encountered its initial “trouble” when the Jewish-owned publishing houses of the West, rather than acknowledging the historical realities presented by the author, failed to come to terms with the deeper moral concerns that informed Solzhenitsyn’s analysis of Jewish and Russian relations during the Soviet period.

Although Solzhenitsyn carefully chronicles the deeds and misdeeds of Jews and Russians alike and pleads for mutual repentance on the part of both, instead, the Jewish censors approached the book in the spirit of a malicious prosecutor presenting to a jury “hidden motives” of “Jew-baiting” and “anti-Semitism.” Thus the book remains only in its Russian version with no English translation in sight. View Entire Story Here, Here & Here.

Who wins and who loses? The Jews win by forbidding the Western world a huge segment of very important history. Who loses? Those whose search for truth in historical events is stymied by the imposers of a false version of the past in a brave new Jewish world.

“TODAY AMERICA IS RULED BY PROPAGANDA,” wrote Paul Craig Roberts, economist, author, and former Assistant Treasury Secretary, in his “Goodbye” article, “Truth Has Fallen and Taken Liberty With It.”

Expanding on his thesis, Roberts continued, “Americans have little access to the truth and little ability to recognize it. Truth is an unwelcome entity. It is disturbing. It is off limits. Those who speak it run the risk of being branded an anti-Semite or a conspiracy theorist.”

Developing his argument, Roberts allows his readers a look into his private life and the opposition he encountered from the mainstream press: 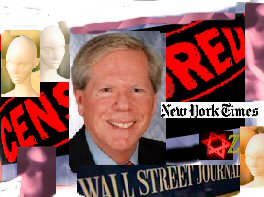 “I was associate editor and columnist for the Wall Street Journal. I was Business Week’s first outside columnist, a position I held for 15 years.

I was columnist for a decade for Scripps Howard News Service, carried in 300 newspapers. I was a contributor to the New York Times and a regular feature in the Los Angeles Times. But for the last six years I have been banned from the mainstream media.

My last column in the New York Times appeared in January, 2004 where I addressed the off shoring of US jobs. The article produced live coverage by C-Span and a debate was launched. No such thing could happen today.” View Entire Story Here.

Roberts closes his piece by announcing that he is “signing off” due to the relentless censorship of the media masters who determine whose pen will be published and whose will be extinguished.

As the saying goes, “The inquisitor’s prohibited list is an unerring guide for discovering the truth.”

For in a brave new world, the Jewish censors have nothing to fear but the people themselves. First they disarm us. Then they silence us. But the people — (as history, which cannot lie, teaches us) — rise up and cast out the offenders. It’s bound to happen in America too. AND, it may happen soon…