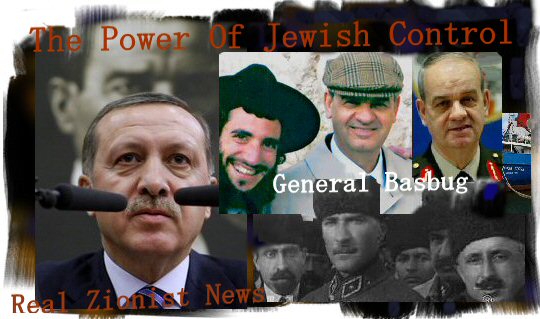 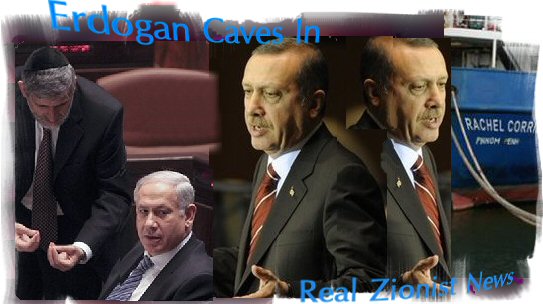 “WE WILL NOT APOLOGIZE TO TURKEY OVER GAZA FLOTILLA DEATHS,” announced Israel’s foreign ministry on June 4, 2010.

“That the request for an apology by Turkish Prime Minister Erdogan came from Turkey’s Ambassador to Washington rather than through Erdogan himself was a big surprise to us,” the Israeli officials remarked.

Erdogan, who initially threatened to attach an escort of Turkish warships to accompany the Gaza-bound Rachel Corrie Ship, never made good on his threat.

Instead, Turkish Foreign Minister Ahmet Davutogu, standing in front of a portrait of secular Turkey’s founder, Mustafa Kemal Ataturk, (a Jew of Sephardic origin), announced that “calm must replace anger,” and that Turkey “is ready to normalize relations with Israel.”

Doing his best to placate the Zionist forces that Turkey is beholden to, Davutogu added: “The security of families of Israeli diplomats in Turkey is our nation’s honor. We will be making sure they are safe.”

Why then did Erdogan and Turkish officials back down from their original demands when their own citizens were murdered and tortured by the Israelis?

Of pressure from NATO and the EU we cannot be certain of, although it is most likely, both being intimately tied to Zionist interests.

But, we can be sure that the “Donmeh Jews,” that is, “Crypto Jews,” who run Turkey’s military, put the brakes on Erdogan’s anti-Israel rhetoric.

With the ongoing clash between the Erdogan government and the Turkish military, (which determines Erdogan’s political tenure), many analysts wonder whether yet another military coup (three so far since 1921), remains a possibility in a country with one foot in the West and one in the East.

Then, of course, there is Israel’s strategic “diplomatic” tool, as affirmed by former Israeli nuclear technician, Mordechai Vanunu. (Vanunu spent 18 years in jail for exposing Israel’s nuclear arsenal and is again in an Israeli prison.)

This “diplomatic” tool is known to all world leaders under Zionist surveillance as “thermonuclear blackmail,” Israel’s ultimate trump call.

One phone call to top Turkish officials threatening a terrorist attack—perhaps an “Iranian-placed” bomb at Erdogan’s home—is all the Israelis need with their Mossad moles in key government places to quell a Turkish backlash against Israel.

BEGINNING WITH MUSTAFA KEMAL ATATURK, who created a secular Turkish state in 1921 through the Jewish-inspired Young Turks Movement, the ties between Turkey and the Zionist cabal have burgeoned into a full blown military relationship.

The Jewish-dominated Young Turks Movement, (AKA Committee of Union and Progress), was germinated in Paris in the late 1800’s and blossomed in the heavily Jewish populated area of Thessalonica, the headquarters of Jewish banking interests since the Ottoman 18th century.

Thessalonica at the time was made up of mostly Spanish Jews who outwardly converted to Islam—but—maintained their Jewish identity secretly as “Donmeh,” or “Crypto Jews.”

With ties to Bolshevik Jews such as Vladimir Jabotinksy, who was one of the founders of early Zionism, Ataturk and his “young Turks” (mostly Jews) began an ongoing alliance with global Zionism and its Jewish leaders through Ataturk’s military officer corps. View Entire Story Here, Here & Here.

In 1949, although with a Muslim majority but with a Zionist-controlling minority, Turkey was one of the first countries to recognize Israel as a sovereign nation.

THE ALLIANCE BETWEEN TURKEY AND ISRAEL that grew under Ataturk’s secular state, is evidenced today by the multiple military accords between Turkey and Israel and the joint military exercises conducted between the two countries, of which, Turkey cancelled its latest planned military exercise with Israel in response to the Israeli flotilla raids. Both the US and Israel use Turkish airspace for military maneuvers.

The current Commander of the Turkish Armed Forces is General Ilker Basbug, a “Crypto Jew.” His visit to Jerusalem in 2008 attests to Basbug’s Jewish loyalties.

Basbug replaced General Yasar Buyukanıt, who was born in Istanbul into a Jewish family which “converted” to Islam but continued as “Donmeh” (secret) Jews.

Although of late, Turkey’s civil-military relationship is strained, the Jewish-run Turkish military remains in control. Thus, Prime Minister Erdogan, while championing the Islamic cause, being hailed as “the new hero of the Islamic world,” must keep looking over his shoulder lest he find his body thrown into a Turkish ditch.

In fact, in all countries dominated by Zionist interests, (ALL Western countries), the leaders who ALL cater to the Zionist cabal, are under constant watch by the Jews.

And: The Ties Between Militarism And Zionist Jews Click Here