How The Jews Are ‘Spinning’ Flotilla Crimes

HOW THE JEWS
ARE ‘SPINNING’ FLOTILLA CRIMES

THE JEWS KNOW A GOOD ZIONIST SHILL when they spot and buy one.

Wasting no time to defend the Israeli murderous raid on the Freedom Flotilla bound for Gaza with humanitarian aid, the power that now runs America, the Jewish Lobby and the Jewish-owned mass media, have enlisted none other than Vice President Joe Biden in their latest propaganda cause.

Clearly, it is a measure of the hold the Jews have over the Obama administration that they can get Biden to act as an apologist for their crimes.

With an article entitled, “Biden Defends Israel On Flotilla Raid,” now being plastered on major news outlets throughout the West, AND an appearance by Biden on PBS’s Charlie Rose Show, the Jewish propaganda machine has preempted all political dissent on the Flotilla raid by Israeli soldiers.

Here’s what Zionist shill Biden has to say on the Israeli crime in order to keep his media image up-to-date with the Jews who decide who, politically, will live and who will die:

“Israel has an absolute right to deal with its security interests. So what’s the big deal here? We are satisfied with Israel’s intent to conduct its own investigation of the incident.” View Entire Story Here, Here, Here, & Video Here.

Yeah, sure, Joe Biden, we can really trust the Israelis to conduct an unbiased “investigation” of their criminal raid. Will Netanyahu charge his own soldiers with premeditated murder? Get a life, Biden, if you can, apart from the Zionist Jews who own you.

Then, of course, Abraham Foxman, director of the Anti-Defamation League, the second most powerful Lobby in America next to AIPAC, rose to the propaganda occasion in defending murder in the Mediterranean by his Jewish cousins in the Israeli Defense Force.

Displaying in his article, “Flotilla’s Deliberate Provocation Against Israel,” a picture of “weapons” found by the IDF of kitchen utensils, computer discs, and wrenches, Foxman forges his own brand of lies in acquitting the Jewish murderers:

“The use of humanitarian aid for the people of Gaza is an elaborate sham and a pretext for ambushing and violently attacking Israeli military personnel.

This unconscionable act of assaulting Israeli soldiers should be condemned by the leaders of every nation who truly seek peace in the region.” View Entire Story Here.

Does Foxman really think the “Goyim” are going to swallow his spin that the Flotilla civilians could actually “ambush” Israeli soldiers? Try again, dear Abe, ’cause the “Goyim” are catching on to you and your cousins’ Jewish lies. 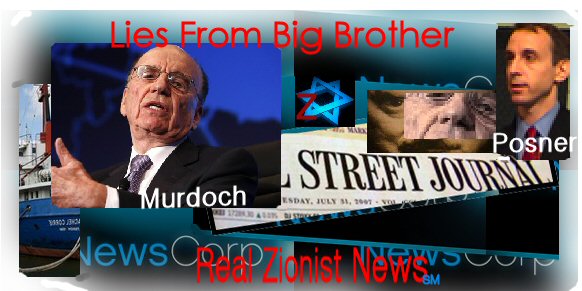 ARE WE OUT OF OUR MINDS?

“RAIDING THE FLOTILLA IN INTERNATIONAL WATERS,” writes Eric Posner in the Wall Street Journal, “is reasonable and has legal precedent.”

Citing the US Civil War as that “legal precedent” for Israeli bloodshed of unarmed civilians, the Jewish tribalist Posner argues that “because the Confederacy was not a sovereign state like Gaza but an agent of insurrection, the Union had every right to seize Confederate ships, and so does Israel in attacking and seizing the Flotilla fleet in international waters.”

Pretty far-fetched wouldn’t you say? Wouldn’t many reputable (Gentile) historians refute Posner’s ludicrous comparison of the US Civil War with the Israeli killings of unarmed civilians? But Jews will contrive all sorts of historical distortions to justify atrocities perpetrated by their own tribe.

IN YET ANOTHER WALL STREET JOURNAL propaganda op-ed, Jewish journalist Yossi Klein Halevi wonders out loud if the rest of the world has “lost its mind” for confusing “pro-Hamas activists” with “peace activists” wielding knives against Israeli soldiers.

But do these people at the WSJ think its readers have “lost their minds” in buying into this rubbish that the Flotilla civilians could stand a chance matching kitchen utensils against the lethal weapons of the Israelis?

But the Zionist Jews who own the entire press and media outlets do not care what the masses think. By feeding us lies, bread and circus, they hope to lull us into a deep sleep.

But like all sleepers, when morning comes, it’s time to wake up. And once the world wakes up to the machinations of the Jews, may God have mercy on them all…

And: Flotilla Crimes And The Strategic Ally Myth Click Here