Israel - Death Of The ‘Jewish’ State? 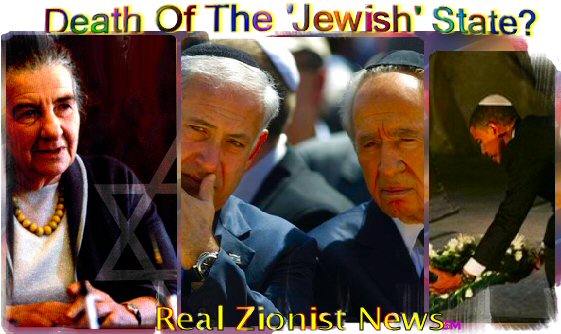 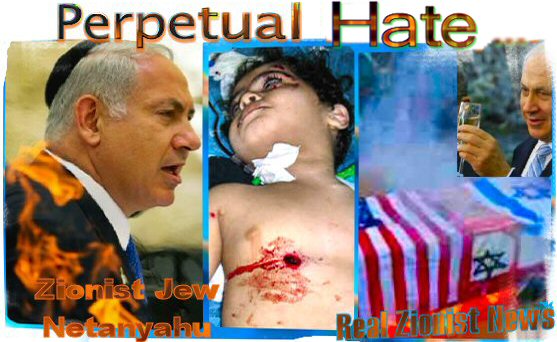 THE ‘JEWISH’ STATE OF ISRAEL was founded on the premise that Jews and Gentiles cannot get along.

Zionist Jews have laid the blame for this upon the Gentiles, although history has proven otherwise. In truth, the Zionists have both fueled and perpetrated this enmity between Jews and Gentiles in their vindication of a ‘Jewish’ homeland in Palestine.

Zionist Jews, with their decades of propaganda via the Jewish-occupied press and media, would have the world believe that the founding and continuation of the Jewish state of Israel is a positive and progressive endeavor.

However, in reality, quite the opposite is true. The idea of a Jewish state, is, at its roots, a negative conception that militates against the brotherhood of man.

In 1925, the most vehement protagonist of a Jewish homeland, Jacob Klatzkin, the co-editor of the Encyclopaedia Judaica, laid down the full implications of the Zionist approach to a Jewish homeland.

Klatzkin argued that the only meaningful goal for Zionism was regaining the land of Israel. Along with this goal, Klatzkin called all Jewish assimilationists, “traitors to their Judaism.” Klatzkin maintained, in opposition to the assimilationists, that the spiritual definition of Judaism should lead to national chauvinism:

“In the face of Anti-Semitism, we Jews must insist on the rightfulness of our own nationalism. To possess our own national life, we must see ourselves as an alien body within the nations we reside, and thus insist on our own distinct identity.” View Entire Story Here.

However, the problem of this “alien body” residing as a hated people in the Gentile nations that host them, has not been solved by the “rightfulness of Jewish nationalism.” Instead, the problem has expanded into a global pandemic.

The entire world has been in a state of chaos ever since the founding of the Jewish state of Israel in 1948. Indeed, the Zionist argument for a ‘Jewish’ state has been exposed for the hoax and anti-human conception that it is.

The world continually witnesses atrocities upon atrocities against the Palestinian people committed by the Israelis and supported by Zionist Jewry worldwide, even up to the present hour.

TWO THREATS TO PRESENT-DAY ZIONISM and the bestial ‘Jewish’ state it has produced, has now come to the fore. Zionist Jews are currently working around the clock to deal with these threats.

The first threat to Zionism is the geopolitical realignment which is now occurring with regard to the nation of Iran and its economic and socio/religious influence globally and in the Middle East.

This Great Divide within Jewry began to manifest itself with the recent atrocities committed by the Israelis against innocent Palestinians in Gaza. Outraged by the actions of the Israelis and the support from global Zionist Jewry, many American Jews began calling for the end of US military aid to Israel. And this especially, (which will mean the death of the ‘Jewish’ state), will surely become a matter of contention within Jewry in the months to come. View Entire Story Here. 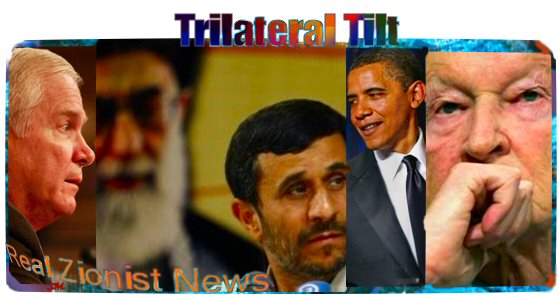 THE POWERS BEHIND PUPPET-PRESIDENT BARACK OBAMA have reformulated a new White House policy - a “Grand Middle East Design” - which focuses on Iran as an emerging power to be reckoned with.

This was brought home to all the players in the Middle East when US Defense Secretary, Robert Gates, told Egyptian leaders during his May 5, 2009 visit, that the “US will persist with Iran overtures.” Middle East analysts say that Washington’s objective is to negotiate with Iran in order to set the boundaries of its growing influence in the Middle East and as a global power. The White House also seeks to pull Iran away from Russia’s influence as well.

No longer is Iran looked upon as a “rogue” nation by the power elites who control Obama, namely, David Rockefeller, Zbigniew Brzezinski, and his protege, David Gates, (all Trilateralists), but rather a nation to be approached through dialogue. This new policy has put the Israelis and World Jewry on “alarm mode.”

The Obama administration is preparing to welcome Prime Minister Benjamin Netanyahu in Washington on May 18, 2009, with pressing demands to follow its Trilateralist line. Indeed, Obama is set to be the first US president in decades to risk colliding directly with the Israeli government and the bulk of US Jewry with regard to Middle East policy. 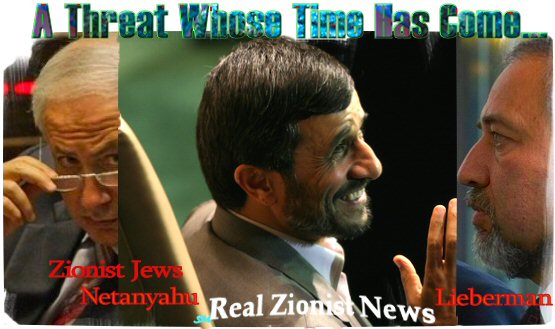 ISRAEL AND AMERICAN JEWRY WILL SEE the US president no longer prioritizing the suspension of Iran’s nuclear aspirations, but bent on establishing a new Persian Gulf order that formalizes Iran’s rising power.

Israel will have no say in this process. By elevating Iran to a premier regional power, America will be sidelining the ‘Jewish’ state of Israel in spite of its sabre-rattling to engage in a military strike on Iran’s nuclear installations.

Netanyahu will resist being cast into a peripheral role in the strategic processes going forward with regard to Iran, which Israel sees as a threat to its future existence.

Thus, Netanyahu is marshalling all Israel’s resources, including an active role for President Peres, to avoid dropping into the role of a third-rate Middle East power whom no one consults.

A final arrow in Netanyahu’s quiver is his ability to canvass support among Zionist-bought politicians in the US Congress with the help of their sponsors, the powerful Jewish Lobby.

But Zionist Jews now fear that American public opinion, which traditionally has been sympathetic to Israel, will have a ‘change of heart’ - especially due to the current economic downturn. View Entire Story Here.