Why Israel’s Days Are Numbered 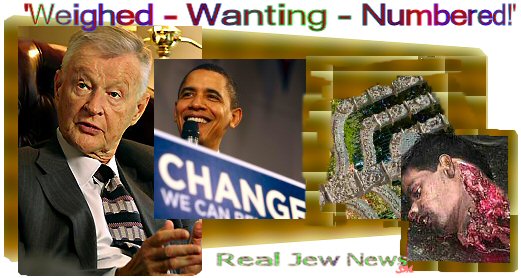 WHY ISRAEL’S DAYS ARE NUMBERED
By Brother Nathanael Kapner, Copyright 2008-2011

Sources: The Brzezinski/Obama Axis Here
Obama Is Brzezinski’s Puppet @ Rense.com Here
“A DANGEROUS EXEMPTION” is the title of an article by Zbigniew Brzezinski, published in June of 2006.

Because Brzezinski applauded Mearsheimer & Walt’s book, The Israel Lobby, which criticizes the influence of Zionist Jews in shaping US foreign policy, the Jewish-occupied press chose to ignore Brzezinski’s article.

Washington insider, Webster Tarpley of Rense.com, has pointed out & confirmed that Brzezinski is indeed Obama’s foreign policy advisor. And many now believe that Obama will be elected as the next US president.

The substantive content of Brzezinski’s, A Dangerous Exemption, gives us a clue as to what will be in store for Israel with Obama & Brzezinski in the White House:

“Given that the Middle East is the central challenge facing America, Mearsheimer and Walt have rendered a public service by initiating a much-needed public debate on the role of the ‘Israel lobby’ in shaping US foreign policy.

Mearsheimer and Walt are also generally critical of Israel’s policy. Thus they could be labeled as being anti-Israel. But an anti-Israel bias is not the same as anti-Semitism. To argue as much is to claim an untouchable immunity for Israel.

Mearsheimer and Walt adduce a great deal of evidence that Israel has been the beneficiary of highly preferential financial assistance. This massive aid to Israel enriches the prosperous Israelis at the cost of the American taxpayer.

Whether all of this produces the best definition of the American national interest in the Middle East is worthy of serious debate.” View Entire Story Here.

ZIONIST JEW ALAN DERSHOWITZ called upon Obama in September of 2007 to repudiate Brzezinski as his foreign policy advisor. Here’s what Dershowitz had to say about Obama being influenced by Brzezinski:

“Obama has made a terrible mistake by bringing on Mr Brzezinski as his foreign policy advisor. In recent years, Mr Brzezinski has expressed a broader form of anti-Israel rhetoric.

Now Mr Brzezinski endorses Mearsheimer & Walt’s book, The Israel Lobby, which is a bigoted attack on the American Jewish community. I am glad that Obama has stated that the book’s arguments ‘are just wrong.’ But now Obama must disassociate himself from Mr Brzezinski.” View Entire Story Here.

Obviously, Obama did not “disassociate” himself from Brzezinski regardless of him paying lip service to the Jewish agenda. Testifying to Obama’s continued reliance on Brzezinski, the Jewish political analyst, Paul Eiderberg, wrote a scathing censure in August of 2008 of Obama’s pick of Brzezinski as his advisor:

“It behooves us to understand the mentality of Brzezinski who is Obama’s Middle East advisor. In past years, Brzezinski served as Carter’s national security advisor. One does not have to read Carter’s Palestine: Peace Not Apartheid to know that Carter is an anti-Semite. Brzezinski has earned the same reputation.

“Not only has Brzezinski defended the anti-Semitic canard that the relationship between America and Israel is the result of Jewish pressure, but he also signed a letter demanding dialog with Hamas, whose charter calls for Israel’s destruction.” View Entire Story Here.

Obama is a weak & unprincipled man. With a domineering Brzezinski advising Obama, an Obama presidency could translate into bad times ahead for Israel.