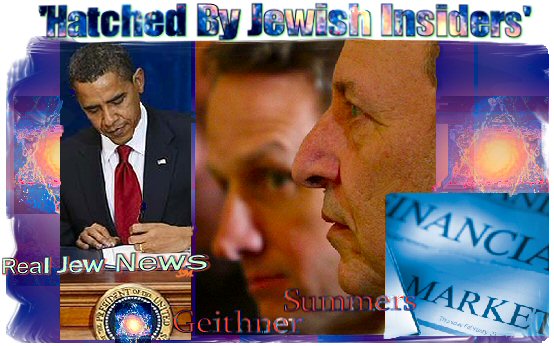 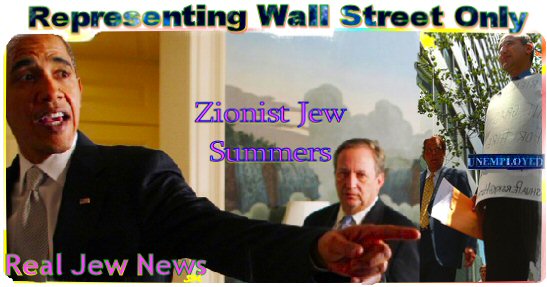 Adding to this list of Jewish-Zionists on Obama’s economic advisors team, is his administrative staff of Zionist Jews:

OBAMA SIGNED HIS $787 BILLION STIMULUS PLAN into law on February 17, 2009. But the question is, will it work? Will Obama’s stimulus bill actually stimulate the economy? Many economic experts, such as Scott Walker, say that Obama’s stimulus “looks more like 25 years of government expansion jammed into one bill than it does an effective stimulus plan.”

Obama’s stimulus plan is short on creating sustainable jobs & long on social goals that will not impact positively on economic activity. Obama’s stimulus is unfocused & spreads a lot of money around on social programs that will have no lasting impact on the American economy. The thrust of tax-payers’ money will be used to fund not only social programs, but government-financed health care, education programs for the poor, digging ditches & rebuilding bridges, (how long can these jobs last?), and so-called green initiatives.

Obama’s stimulus bill also includes allocating billions in newly printed money by the Fed for food stamps, child care services, homeless shelters & soup kitchens, computerization of personal medical records, unemployment insurance, community-based outreach programs, and job-training for jobs that do not & will not exist due to intensified outsourcing to China & India of both labour and hi-tech jobs. (Try calling United Airlines, McAfee Computer Services, and Western Union, and someone named Omar or Harshad will answer.)

AND MOST ALARMING OF ALL - Obama’s Stimulus bill gives a whopping $1 billion to Jewish social service providers who already are oozing in Jewish wealth.

In short, Obama’s stimulus plan will only delay the inevitable day of reckoning for the American people. View Entire Story Here & Here. 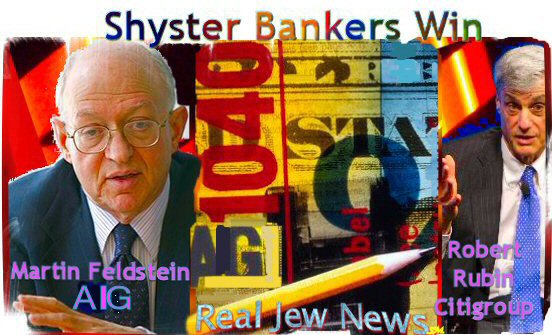 “OBAMA’S STIMULUS & BAILOUT PLAN,” according to former Treasury Secretary, Paul Craig Roberts, “will redistribute wealth from American taxpayers to the shyster banksters who have destroyed American jobs, ruined the retirement plans of tens of millions of Americans, and worsened the situation of millions of people worldwide who naively trusted American financial institutions.”

“The ongoing theft has simply been recast,” Roberts continues, “instead of using fraudulent financial instruments, the banksters are using government policy.”

Obama’s stimulus is a classic bait-and-switch. Once the highways are built and social-service case loads have increased, American tax payers, (what’s left of them who will have any income to pay taxes from), will be stuck with the bill to pay for and maintain the new roads and services.

Obama’s stimulus is also a bait-and-switch on employment. While the stimulus package creates federal and construction jobs, once the money runs out, those workers will lose their jobs. Even worse, most of the money is actually allocated for bailing out failed state and local governments. Then, after $135 billion in the federal aid gets spent, many states will be staring down budgetary black holes unless they initiate dramatic spending cuts by which many jobs will be eliminated. Read Scott Walker’s Analysis Here. 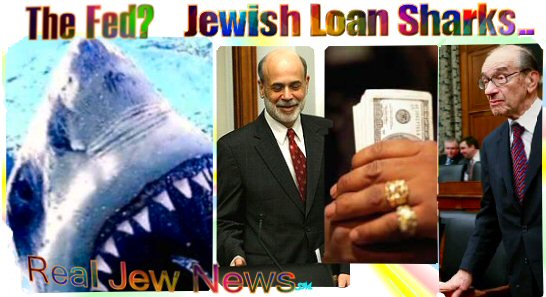 AND WHO ARE THE WINNERS? The Jewish loan-sharks who own the private banking consortium known as the Federal Reserve System and who enter billions of dollars out of thin air in their books and CHARGE INTEREST on their LOANS.

BUT WHO ARE THE LOSERS? Hard working and willing-to-work Americans are the losers and will lose even more once the Jewish-owned Fed comes collecting for funding (with interest) Obama’s stimulus bill.

And the Zionist Jews, (who always remain wealthy during times of economic distress), along with their synagogue buddies at the Federal Reserve who are tied to the Rothschild global-banking elite, will be laughing all the way to their Jewish banks…

A Special Thanks To The Servants Of Jesus Christ For Their Generosity!
For More See: American Jewry & The Economic Crisis Click Here