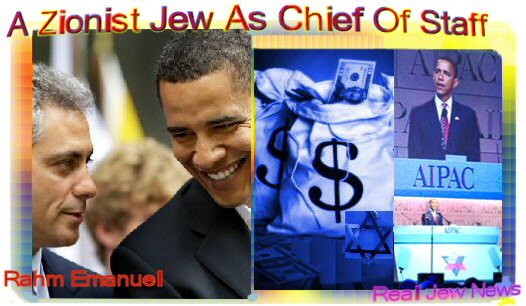 IT DOESN’T TAKE LONG FOR ZIONIST JEWS to insinuate themselves into the White House. No sooner did Obama get elected, that he chooses as his first administration pick, a Talmudic Jew, Illinois Democrat Congressman, Rahm Emanuel.

Obama & Rahm Emanuel were found in recent days at the infamous June 4 2008 AIPAC Convention at which Obama grovelled before this all powerful Jewish Lobby. Right after Obama’s shameless speech, “Now Is the Time to Stand By Israel”, Rahm Emanuel endorsed Obama. Emanuel then brought Obama to meet with the AIPAC executive board.

ABC news reported on November 5 2008 that: “Obama likes the fact that Emanuel knows policy, knows politics, knows Capitol Hill. Obama has told associates that he knows that Emanuel will ‘have his back.’”

But of course! Who else would know his way around the Zionist-Jewish infested Capitol Hill but a Zionist Jew himself? Indeed, Jews picked up 5 more seats in the Senate & 18 more seats in Congress this time around.

ZIONIST JEW RAHM EMANUEL MADE MILLIONS as an investment banker, reported USA Today in a recent article. Emanuel then formed with his wife, the Rahm Emanuel and Amy Rule Charitable Trust Foundation, in 2002.

Rahm Emanuel used his money and his Zionist Jewish influence in local Chicago politics which earned him the nick-name, “Rahmbo.”

The Chicago Tribune published an article on Emanuel in 2006 which cited him as “the man who remade the Democratic Party in his own image.” It takes money & an aggressive personality to accomplish this. Rahm Emanuel has both. Doubtless, this is why the Chicago Tribune labelled Emanuel as a “profane, ruthless, and savvy operative.”

Perhaps this is why Obama chose Emanuel to “cover his back.” Surely, Obama could use a a “ruthless & savvy” strong man in the likes of this Zionist-Jew who can “remake Capitol Hill in Obama’s own image…” 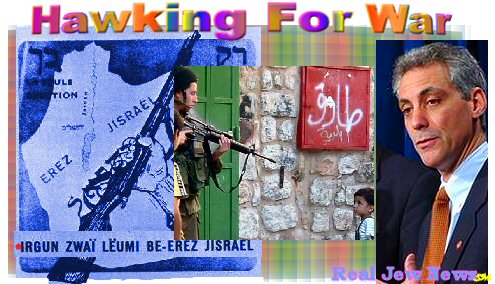 A ZIONIST TERRORIST was Rahm Emanuel’s father - a member of the right wing Israeli “Irgun” paramilitary cell which terrorized Arab civilians. He moved to Chicago before Rahm Israel Emanuel was born in 1959. Growing up in Chicago, Rahm Emanuel studied at the Talmudic yeshiva, Bernard Zell Anshe Emet Day School. After graduating in 1968, Emanuel served in the Israeli Defense Force known as the IDF.

Rahm Emanuel co-authored the book, The Plan: Big Ideas for America. The section which embraces all of foreign policy is entitled, A New Strategy to End the War on Terror.

Here is an excerpt from the pen of the Zionist-Jewish War-Hawk, Rahm Emanuel:

“We need to make our country safe. America must lead the world’s fight against the spread of evil and totalitarianism. We need to fortify the military’s ‘thin green line’ around the world by adding to the US Special Forces and the Marines. We need to expand the US army by 100,000 more troops.” View Entire Story Here.

Sounds like a page right out of Obama’s play book does it not? I mean Obama’s war book -coming soon to a military theatre near you.