Is A USA Depression Coming? 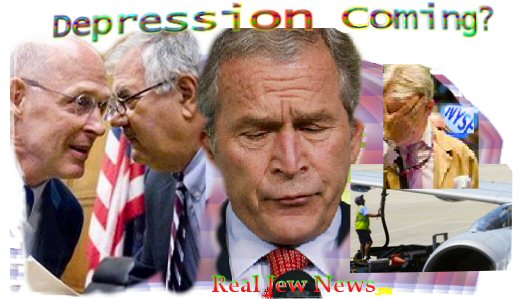 IS A USA DEPRESSION COMING?
By Brother Nathanael Kapner, Copyright 2008-2011

The current financial crisis has been a wake-up call for most Americans. People are finally acknowledging that America is in deep financial trouble but are not sure what to do about it. So first, let’s look at some of the problems:

Trucking: The skyrocketing price of diesel fuel is crippling America’s trucking industry. The American Trucking Association predicted that independent truckers alone will have to spend $140 billion for diesel in 2008, sharply higher than the $112 billion they spent in 2007. Many independent truckers have lost their rigs because they couldn’t make their monthly payments.

Major American carriers have been forced to lay off personnel, curtail flights, limit service, mothball planes, and increase the cost of fares. Baggage, (once a free service), is now being charged $15 for the first bag & $50 for the second bag.

American Airlines posted a $1.45 billion loss in the second quarter of 2008. Delta posted a $1.04 billion loss during that period. US Airways, the parent company of United Airlines, reported a $567 million loss.

Automotive: The rising cost of oil has plagued the automotive industry. GM, Ford, and Chrysler have sharply cut back production of gas-guzzling vehicles such as SUVs and pick-up trucks.

US automotive jobs are outsourced to China, Malaysia & Thailand, where laborers work for 20% of the salaries that are paid in the US. Both GM and Ford have built assembly plants in China & Thailand.

Retail: Consumers feeling the “pinch” are trimming purchases of basic goods. On September 29 2008, Walgreens, the largest US drugstore chain, posted its smallest sales increase in a decade. 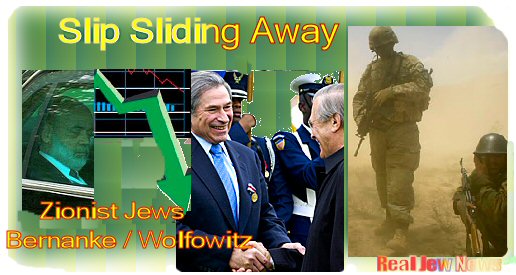 THE UNDERPINNING OF AMERICA’S POLITICAL POWER is its once highly-touted economy. With the current financial crisis, this underpinning has toppled to a resounding crash.

One cause of the financial crisis can be discovered in America’s wars in Iraq and Afghanistan which have seriously strained US military forces. The cost of these wars, with no end in sight, & with both McCain & Obama calling for their continuation, far exceeds original projections. Today’s projections forecast a cost of $2.4 trillion up through the year 2010, even with troop pullouts.

In both the financial crisis and the high cost of waging unnecessary wars, the principals involved happen to be Zionist Jews. In the former, the Federal Reserve Bank is owned and run by Zionist Jews. In the latter, the Zionist Jews of the “neocon” movement have promoted these wars through their political infiltration of Bush’s eight-year presidency.

The outlook for the next presidential administration does not carry much hope for the future. McCain’s campaign staff and advisors are top heavy with Zionist Jews.

And Obama must dance to the tune of David Rockefeller’s favorite hawk, Zbigniew Brzezinski, who advises Obama. Rockefeller funds Obama.

Perhaps an economic “depression” will prompt Americans to take a long, hard look, at how the US has been negatively influenced by Zionist Jews.