Is Biden Good For The Jews?

IS BIDEN GOOD FOR THE JEWS?
By Brother Nathanael Kapner, Copyright 2008-2011

Unique Source: Joe Biden-War Monger @ Rense.com Here
“BUT IS HE GOOD FOR THE JEWS?” is a question asked by the Jewish community when looking at a political candidate.

And with regard to Senator Joe Biden of Delaware as Obama’s VP, the Jewish community says “Yes!”

Biden got the Jewish nod when on August 23 2008 the head of the National Jewish Democratic Council, Ira Foxman, praised Obama for an “outstanding selection” in tapping Joe Biden as his running mate:

— “Biden is a great friend of the American Jewish community with a solid pro-Israel record. He has a strong commitment to issues important to the Jewish community including reproductive rights for women, opposition to radical right wing judicial appointees, and maintaining a strong wall between church and state”— Here.

These issues that Ira Foxman praises Biden for are what really matters to the Jews:

Keeping Christians Off Of Judicial Benches. 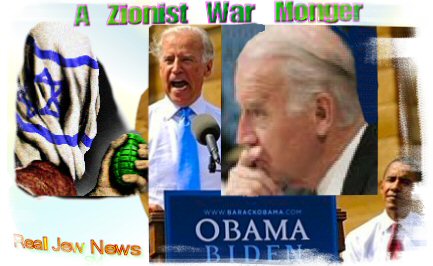 SHALOM TV CONDUCTED an interview with Biden in 2007 in which the VP hopeful had nothing but praise for the rogue State of Israel. During the interview Biden said:

— “I am a Zionist. You don’t have to be a Jew to be a Zionist. Israel is America’s greatest Middle East ally. Imagine our circumstances if were there no Israel. How many battleships would there be? How many troops would be stationed throughout the world?”— Here.

But Mr Biden! America representing the will of Israel has multitudes of battleships and troops “throughout the world.” (Biden is known for being a war monger Here.)

During the interview Biden also revealed that his son is married to a Jewish woman of the Berger family from Delaware and that he had participated in a Passover Seder at their house.