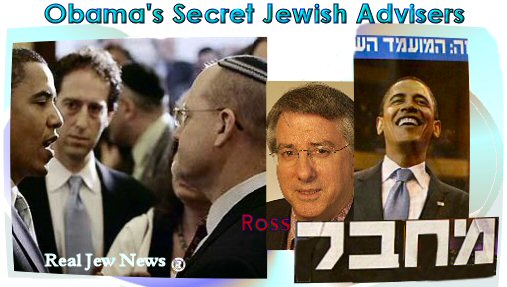 Unique Source: Obama Nailed For AIPAC Hypocrisy @ Rense.com Here
BARACK OBAMA IS GOING TO ISRAEL on July 22 2008. He will be accompanied by the Jew, Dennis Ross, his leading ‘Middle East adviser.’

Ross began “secretly” advising Obama some 15 months ago. But Obama made sure to tell only the Jews all about it in a closed meeting in NY with 25 Jewish leaders in August of 2007.

The Jewish Press correctly observed that “Obama’s association with Ross could help him win the confidence of pro-Israel donors” Here. In other words, Barack Obama knows which side his political bread is buttered on.

Now that Obama has bowed to the Jewish Lobby with his AIPAC speech on June 4 2008 - he proudly just announced to the Jews only that he’s bringing their man Dennis Ross with him to Israel on July 22 2008. Indeed - next week we will be treated to more of Obama groveling before the Jews.

AT A PRIVATE JEWISH GATHERING in Los Angeles in June 2008, Obama met with 150 Jewish donors.

The meeting, not open to the Jewish owned mainstream media, was hosted by the Jewish Congressman Howard Berman & Jewish former Congressman Mel Levine.

Several Jewish members of Congress are on Obama’s “committees” including New Jersey Senator Frank Lautenberg, Florida Rep. Robert Wexler, Illinois Rep. Jan Schakowsky, & New Jersey Rep. Steve Rothman. Levine’s role is to shape Obama’s Israel policy - giving it “Jewish appeal” so as to get the backing of the Jewish Lobby and the Lobby’s partner in corruption, the Jewish-controlled mainstream media.

OBAMA MARCHES TO THE ADL DRUM

THE INTERNET CAMPAIGN THAT SMEARED OBAMA AS A MUSLIM in January 2008 met with a quick response on Obama’s part. Obama began mailing out fliers throughout South Carolina in which he called himself “a committed Christian.”

But the Anti Christ Jew, Abraham Foxman of the Anti Defamation League (ADL), was not happy about Obama’s “Christian” avowal. Foxman said:

Immediately Obama’s liaison to the Jewish community, the Jew, Eric Lynn, placated Foxman, saying: “Barack Obama is not trying to introduce Christianity into the campaign.”

So not to worry dear Abe. Obama is really no Christian at all. Methinks that Barack Obama is nothing less than a closet Muslim after all…