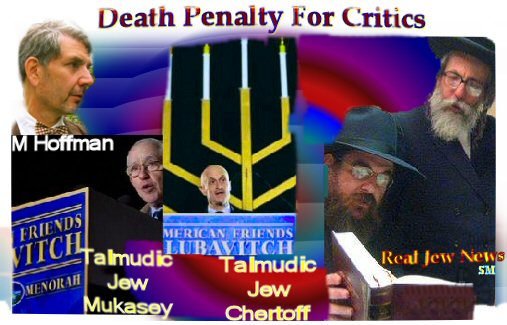 Above: Michael Mukasey Is US Attorney General; Michael Chertoff Is Director Of US Homeland Security.

Place Your Order For: Judaism Discovered @ Revisionist History Here
“A NON-JEW WHO STUDIES THE TALMUD IS LIABLE for execution,” opens the pages of Michael A Hoffman’s masterwork, Judaism Discovered. The author continues:

— “Readers of this book are forewarned: There is a death penalty for critics of Judaism who study the Talmud according to Sanhedrin 59a.” —

In exposing Judaism, Michael Hoffman states in his Introduction that his book Judaism Discovered would find itself beyond the normative protections of free speech. Indeed, this has already occurred with the banning of the sale of the book by Amazon.com.

Hoffman decries the racial elitism found in the ranks of Judaism, saying, “We do not believe that modern Judaics are the descendants of the ancient Jews of the Bible era.”

Pressing his indictment of the racist nature of Judaism, Hoffman asks the question, “Did Jesus exploit His racial status? Did He glorify Israelite descent as a key to heaven? No! Rather He was crucified because He repudiated the Pharisaic doctrine of racial nationalism.”

And with fitting words, Hoffman implores all readers:

— “If you choose to oppose this book, do so on solid ground. Do not regurgitate the calumny of rabbis and Zionists that Judaism Discovered incites ‘Jew hate.’ If the book teaches you nothing else, God grant you the grace to understand that it is the rabbis themselves who are the world’s most flagrant and virulent Judaic-haters.” —

Growing up as a Jew I can attest to the rabbis being “Judaic haters.” Although we studied various religions in my Bar Mitzvah class, we were forbidden to study Christianity which is the only religion that offers forgiveness of sins and deliverance from the curse of death. 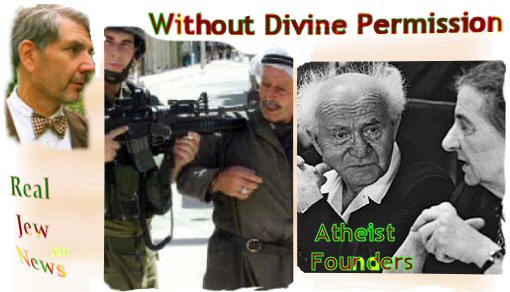 “THE ZIONIST REGIME IN PALESTINE is Satanic to the core,” writes Hoffman in the opening chapter, “To The Judaic Reader.” He continues:

— “Without divine permission, the rebuilding of the hypothetical Israelite commonwealth would be, as Spinoza had the prescience to foresee in the 17th century, dependent on the secularization of the Judaic people. This is what exactly occurred when the supposed ’state of Israel’ was created by the UN and the USSR with crucial assistance from their partner in crime, Harry S Truman.

“These three were the ‘angelic benefactors’ of the alleged ’state of Israel’ without whom Palestine would still be Palestinian today. Meanwhile the actual pioneers of this ‘Israel’ consisted mostly of secularized Judaics as Spinoza predicted: atheists, communists, labor socialists, and irreligious kibbutzniks.” —

Continuing his censure, Hoffman illustrates how the ‘Israeli citizen’ presents to the world the image of the aggressive killer — no longer possessing the “exiled, hunted Jew” image. The Israeli is now the hunter and exiler of others.

Expanding on this new image of the Jew, Hoffman writes that in the Third World, the Jew is no longer viewed as the passive and pitiable scholar whose beard is yanked by the jackbooted Nazi. He is rather perceived to be himself the jackbooted Zionazi.

And calling upon the testimony of the Lord Jesus Christ Himself, Who when indicting Jerusalem as the “killer of prophets,” Hoffman demonstrates that this satanic propensity of that city when denuded of God, has brought about a “Judaism” that serves not only to exalt the adherent’s ego & pride, but to denigrate the religious aspirations of devout Christians as well…