The Zionist War Party In America 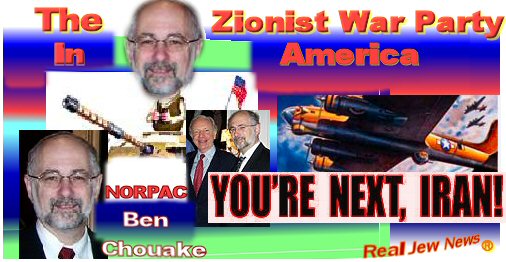 THE ZIONIST WAR PARTY
IN AMERICA

Or Send Your Contribution To:
Brother Nathanael Kapner; PO Box 547; Priest River ID 83856
E-mail: bronathanael@yahoo.com
THE ZIONIST WAR PARTY in America has nothing better to do than to clamour for a US invasion of Iran.


One of the leading Zionist Lobby groups clamouring for war is known as NORPAC.

NORPAC bills itself as: “a political action committee whose purpose is to support candidates and sitting members of the US Senate and House of Representatives who demonstrate a genuine commitment to Israel.” (Translation: Bribes To Pro Israel Candidates & Sitting Members! Most Likely Here!)

The Jewish war party at NORPAC actually boasts of instigating a war with Iran when they descended on Capitol Hill during the June 2008 AIPAC Conference.

At this “mission,” as NORPAC describes it, the Jewish lobbyists demanded that US Senators & Congressmen impose a naval blockade on Iran Here.

This Zionist demand for a naval blockade Vis-à-vis House Res 362 is interpreted by many as an ‘act of war.’ 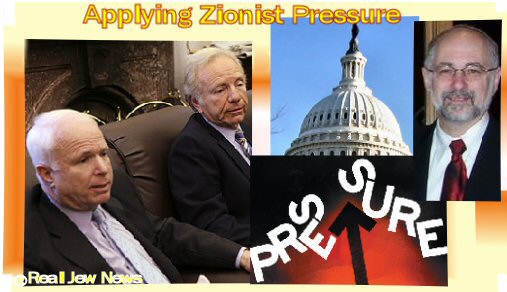 THE ZIONIST JEW - SENATOR JOSEPH LIEBERMAN known to many as “McCain’s Handler” made a phone call to NORPAC President, Ben Chouake, in early June of 2008.

According to Chouake, Lieberman was all excited about the NORPAC mission at the AIPAC Conference, saying, “There was a buzz on the Hill about the size and scope of the Jewish mission to Washington.”

NORPAC’s Ben Chouke boasted of the “pressure” they put on US Senators & Congressmen:

— “The pressure was immense. We ended up with 491 appointments with members of Congress. It helped that about half of the Senate had already been in the homes of one of our members.

“We ultimately met with 97 of the 100 members of the Senate. The rest of the meetings were with members of the House of Representatives. It felt like all our years of work developing relationships had finally paid off.” (Freudian slip). — Here.

Indeed the Zionist war party has US politicians in the palms of their “monied hands.”

I Recommend That Zionist Lobbies Be Usurped
By Anti Zionist Christian Lobbies - Now!


And: “3 Main Characters Of The Jewish Lobby” Click Here