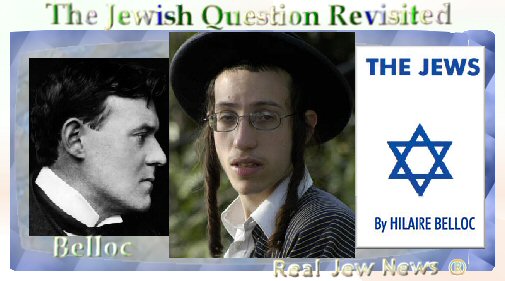 “THE JEWS ARE AN ALIEN BODY within the society they inhabit” wrote the British historian Hillaire Belloc in his 1922 book, The Jews.

Belloc (1870-1953) was a devout Catholic with a prophetic gift for predicting the future of Europe’s atheistic society.

The book (which would never make it to the press in today’s Zionist controlled world) caused a stir amongst World Jewry - so much so that the New York Times reacted with a vicious rebuttal to Belloc’s book.

In his book The Jews Belloc made a very telling observation regarding the Jews and their relation to their host nations:

— “The Jew comes to an alien society at first in small numbers. He is treated as a friend. He thrives. His numbers increase.

Then through a divergence between his aims and those of his hosts he creates (or discovers) a growing animosity. He resents it. He opposes his hosts who wish to be masters in their own house. The Jew resists their claim. It comes to violence. It is always the same miserable sequence.” —

Here Are The Main Points Belloc Makes Regarding ‘The Jewish Question:’

Jews Are An Alien Body Within The Society They Inhabit.

Jews Must Be Segregated.

Jews Are Different Than Gentiles In Their Loyalties & Patriotism.

Jews & Protestants Wish To Form An Anglo-Jewish State In Palestine. 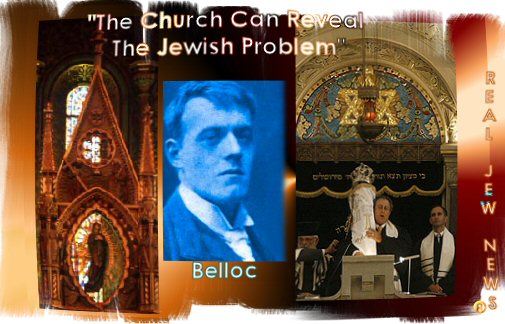 THE CHURCH VS THE SYNAGOGUE

“THERE HAS BEEN HOSTILITY between the Church and the synagogue ever since the first century,” Belloc wrote in his book The Jews.

The issue as Belloc saw it was a “religious polemic” not a “racial polemic.” But for this especially the New York Times smeared Belloc as an “Anti Semite.”

Belloc believed that the Church was the only solution to deal with the “Jewish problem.” And he makes a very convincing point of this in his book The Jews:

— “Wherever the Church is powerful the traditional principals of civilization of which it is the soul and guardian will always be upheld. One of these principals is the sharp distinction between the Jew and ourselves.

“Thus wherever the Church has power the Jewish problem will be fully revealed and appropriately dealt with.” —

But how did the New York Times respond to this word of Christian reproof? Not by making a reasonable defense - no, not on your life.

The Jewish owned paper sarcastically responded with a veiled threat: “It’s a shame that Belloc’s Judeophobic shibboleths have secured a reputable publisher to disseminate his Anti Semitic diatribes.”

And: “Judeo Masonry & The Ruin Of Europe” Click Here