Behind The Scenes At The AIPAC Conference 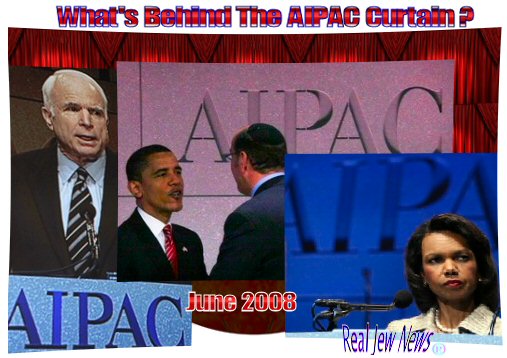 BEHIND THE SCENES AT THE AIPAC CONFERENCE
By Brother Nathanael Kapner, Copyright 2008-2010

Or Send Your Contribution To:
Brother Nathanael Kapner; PO Box 547; Priest River ID 83856
E-mail: bronathanael@yahoo.com
“CONTROL” IS WHAT THE AIPAC ZIONIST JEWS are all about. Is it then any surprise that the June 2-4 2008 AIPAC Policy Conference with 7,000 attendees including 300 from Congress was a media blackout?


How could it be that with Condoleezza Rice, all 3 Presidential hopefuls, and Israeli Prime Minister Ehud Olmert in attendance, the media coverage was nill? Well - since Jews stick together, (I grew up as a Jew), the Jewish owned mainstream media apparently agreed to “stonewall it.”

The business of wielding influence is what American Jewry is all about. And American Jewry prefers not to have this made public. This was brought home to the American Conservative Magazine journalist, Phillip Weiss. At his very first AIPAC Conference this year, Weiss was demanded by AIPAC officials while writing down his report to show his credentials.

Weiss, who made the observation regarding the Conference that AIPAC was serving their tribal interests, reported: “At the outset AIPAC performed a ‘roll call.’ The names of all the politicians in attendance were read off by three barkers in auctioneer fashion. House Speaker Nancy Pelosi won the day before her peers by shedding tears when mentioning the Israeli soldiers captured by Hezbollah.”

Indeed - all with political ambitions to remain in power came to the Conference to be accounted for before the influence-wielding Jews of AIPAC. 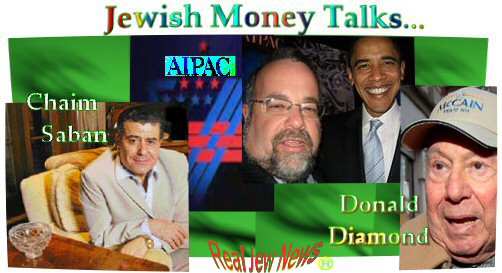 A CRASS DISPLAY OF JEWISH WEALTH

AIPAC’S WEALTHY JEWISH DONORS were featured by flashy banners displayed in the main hall of the Conference, Phillip Weiss reported.

One of those donors featured, reported Weiss, was the Jew, Donald Diamond, an Arizona real estate tycoon whom the New York Times profiled on the *front page* when he raised $250,000 for McCain this year. On his banner Diamond wrote:

— “The Jewish community is a family and we have to take care of each other” — Here.

Another wealthy Jewish donor featured, Weiss reported, was the toymaker Chaim Saban. He was granted center stage when speaking before the audience wearing a flashy platinum tie, white shirt, and silver suit.

Obviously, this crass display of Jewish wealth was to send a message to the politicians in attendance: ‘Play ball with us and our Jewish bucks will keep you in the ball game…’ 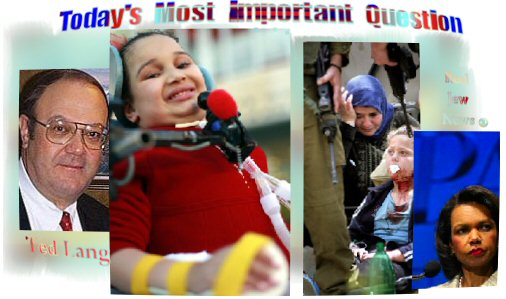 In his Rense.com article, AIPAC Vs America, Rense political analyst Ted Lang observes that AIPAC controls American foreign policy in the Middle East. Lang also says that attempts to terminate the slaughter of innocent Iraqi citizens and to stop the AIPAC-ordered invasion of Iran will invoke the smear of ‘Anti-Semitism.’

And with the mass murders of Iraqi civilians and women with their children in Palestine, Ted Lang asks the most important question of our day:

— “Are the world’s greatest atrocities now attributable to Jews?” — Here.

If this question is not answered soon, groups like AIPAC will make our entire political system one great Zionist atrocity!

And: “The Zionist War Party In America” Click Here