How The Jews Think - Pt I 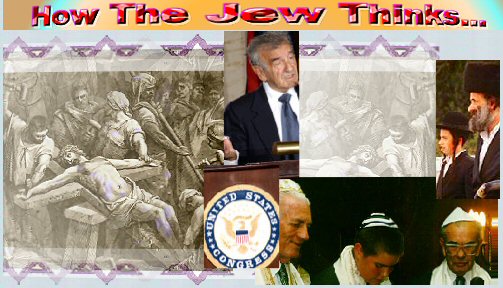 HOW THE JEWS THINK
By Brother Nathanael Kapner, Copyright 2007-2011

Or Send Your Contribution To:
Brother Nathanael Kapner; PO Box 547; Priest River ID 83856
E-mail: bronathanael@yahoo.com
I GREW UP AS A JEW. And having gone to an upper middle class synagogue throughout my childhood up through my young adult years, I am uniquely qualified to do an expose on the inner workings of the Jewish mind.

Now that I am an Orthodox Christian, having converted in 1971 to Christianity, I can see very clearly how the Jew thinks:

1. The Jew sees himself as a “Jew First.” In any nation that the Jew may reside in, he is an “American Second” or a “Frenchman Second” etc. - for the Jew is always a Jew First. Thus the Jew puts his interest first before national interests.

2. The Jew promotes secularism in any nation he may reside in. This works to his benefit. For the Jew fears nothing more than a Christian World View which has at its root the absolutism of Christianity over all other faiths as being false religions including Judaism. But the Jew believes that Judaism is the only true religion and it is his province alone. For the Jew looks upon the Gentiles, “the Goyim” as being inferior to him.

3. The Jew uses the indictment of “Anti Semitism” to prevent any criticism of his conduct, his ideas, and his agenda.

4. The Jew is hell bent on his self-preservation. Though American and European Jews love the good life, they promote Zionism, in order that they will always have a place to escape to.

5. The Jew would like to see the New Testament destroyed, defamed, discarded, and mocked. For in it contains the historical record of the Jewish leaders committing Deicide against the Eternal Son of God Who became man for our salvation, the Lord Jesus Christ. The Jew wishes to eradicate this historical fact for it places him in a position as having to repent, an act that the Jew finds repulsive.

6. The Jew though he may be non religious still honors the rabbis as having final authority on all religious questions and matters. The rabbis have as their authority the Talmud which contradicts the Old Testament and blasphemes Jesus Christ, the Virgin Mary, and Christians.

7. The Jew may promote “equality amongst men” yet he sees himself in a self conscious ethnic group that he considers as being superior to all others.

8. The Jew when confronted with the claims of Christianity will always reply, “I was born a Jew and I will die a Jew.” What he means is, “I will never become a Christian like the dumb goys.”

9. The Jew loves to be in control. The Jew loves to be at the top of the ladder. If Christianity were again to be in predominance in America, the Jew would be horror-struck. For then he will have the finger pointed at him that he is a Christ denier, a stubborn, stiff-necked hater of Jesus Christ, and a supporter of the Jews Who brought Christ to Pilate to have Him crucified.

10. The Jew will use every means possible to undermine Christianity in whatever nation he may reside. He will always cry, “Look what they did to us!” as if he is an innocent lamb without any faults. But whenever someone shows why “they did this to them” he shouts back, “You’re an Anti Semite!’