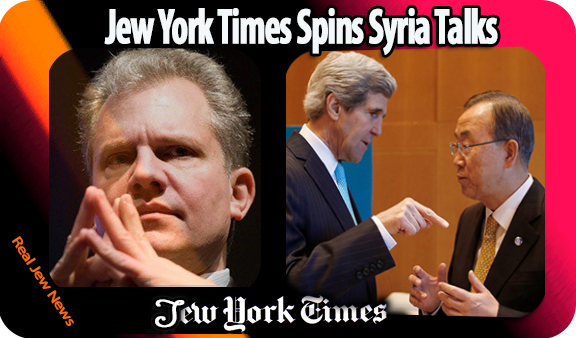 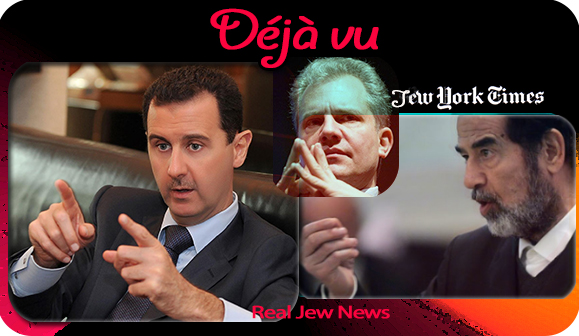 IT’S WEAPONS OF MASS DESTRUCTION all over again. And now the runner up to that Jewish lie is being plastered all over the Jew York Times.


The Jew York Times is serving up its latest piece of warmongering calling Assad a “torturer” of “his own people.”

Haven’t we had enough of JEW LIES by now?

It’s ‘Jew timing’ all the way.

No coincidence that a ‘confidential report’ of photos of tortured prisoners from an anonymous source propagated by the Qatari government was published by the Jew York Times on the very eve of the peace talks.

The Syrian Ministry of Information said there was “no evidence” they were taken in Syria.

“I doubt this report,” contested Syria’s Information minister. “We should check these photos. Who are these people? Where are the names? From which prisons? Who is this person who has the authority to have these photos?” 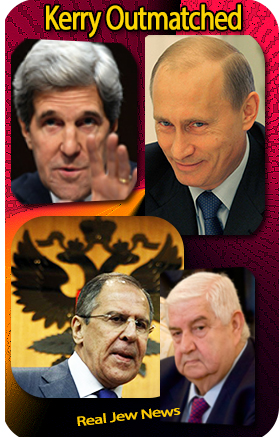 Jew-owned Kerry took the cue the very first day of talks: “The only thing standing in the way of peace is the stubborn clinging to power of one man. The right to lead a country does not come from torture.”

“No one has the right to confer or withdraw the legitimacy of a president, a constitution, or a law, except for the Syrians themselves.”

“You live in New York. I live in Syria. I have the right to give the Syrian version. After three years of suffering, this is my right.”

The Jew-owned press has blacked-out reports from Syria, while Jewmerica, Israhell, and Saudi Arabia control the narrative and confine it to propaganda from the “opposition.”

MOALLEM BOLDLY laid the blame for Syria’s bloodshed on the Saudi/Qatar axis supported by America for “financing terrorism” and conspiring to destroy Syria with petrodollars used to “buy weapons” for terrorists and “flooding” the international media with lies.

It’s deja vu in Montreux, Switzerland. Kerry is led by the nose by his Jew masters and is not permitted to transcend the war cry Jewry channels through his larynx.

War, not peace, is what Kerry sings. By demanding that Assad “must go” the talks begin with a non-starter.

And the Jews with their puppet Kerry destroy a chance for peace once again.